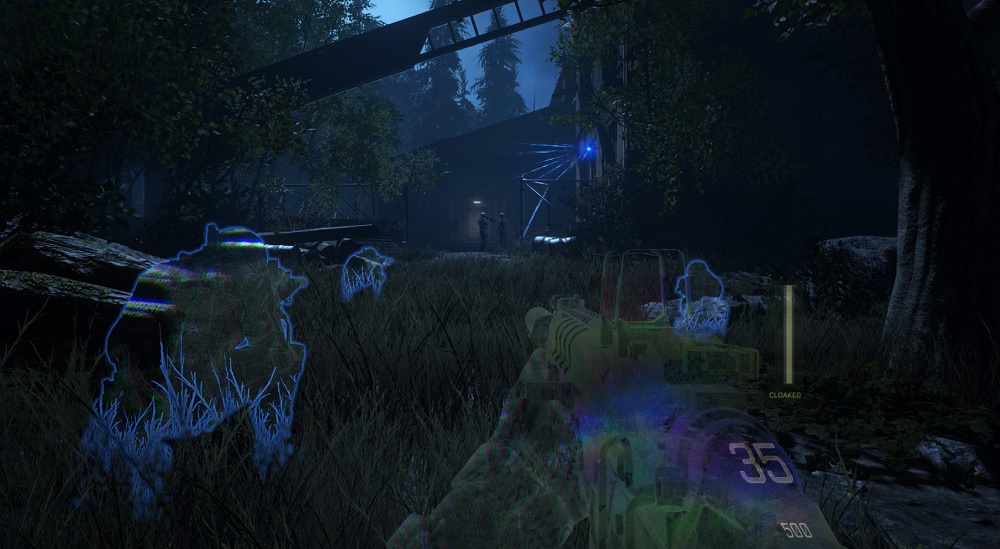 Advanced Warfare’s writing can be sharp, like when Mitchell is fascinated by a bug-like flying spy camera and his companion Gideon says, “Try not to fall in love with the toys.” That line is appropriate for the game itself, as you can overuse the tech and under-use your combat skills. You can hang back from a firefight and launch a “threat grenade” into the air. This paints a pink outline of every enemy that it detects in front of you, even if that enemy is hiding. You can then toss a “smart grenade” into the air. That explosive will fly via a propeller, identify a nearby enemy, and then fly directly at that foe and blow up. Now, how can you resist falling in love with these toys?

Yes, I jest. But the game has lots of toys to play with, like cloaking suits, twin-rotor drones, hover bikes, mag-grip gloves that you use to walk up buildings, mech-like armored suits known as ASTs, and drone swarms. These gadgets add a lot of variety that goes beyond your typical modern combat scenario. The single-player campaign has 15 missions, and the developers make sure that you get to use all of the devices across those different challenges. I had a lot of fun playing with the Grapple, where you shoot out a hook with a rope that allows you to scale a great distance in a split-second. You can also use it to pull a soldier out of a giant armored mech suit. 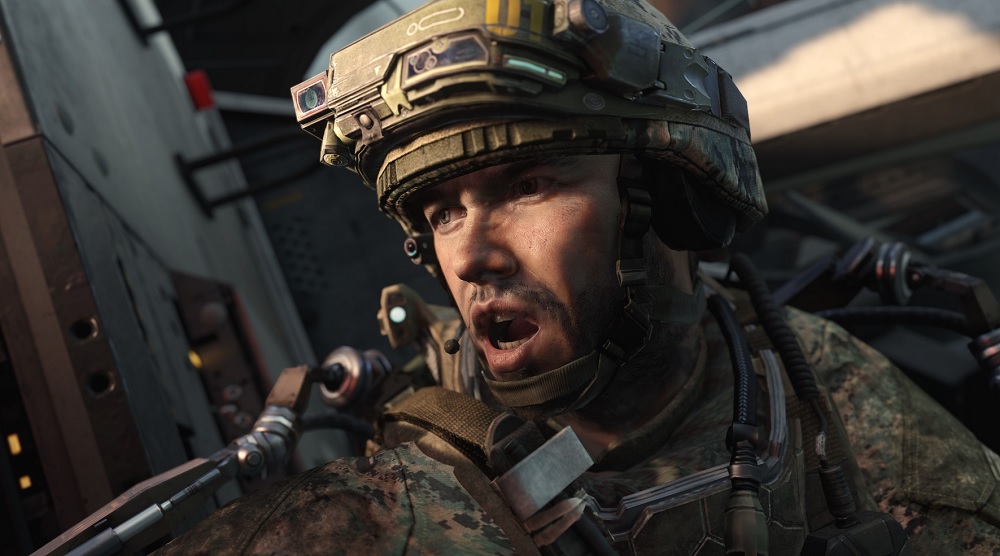 The theme of technology’s risks meshes well with the game

As we get older, players like me are starting to appreciate better, novel-like stories and lofty themes in their games. Advanced Warfare delivers on this front, prompting you to ask questions about the way things are and how they could be better. The story and themes unfold as you play in a natural way, not forced.

This is visible in the how Sledgehammer tells its story. You get the preamble in the first scene, and then you have to learn how to play and get some of the backstory in the next scene.

One minute, you’re trying to rescue the President of the United States. The next minute, someone turns the lights on and you find that you’re part of a virtual reality simulation created by Atlas, the private military corporation run by Spacey’s character, to train its mercenaries in hostage rescues. Then Spacey and his military leader take you on a tour the company and its training facility to show you both the global power of the company — and teach you how to use the futuristic weaponry at the same time. Everybody knows you have to include a boring tutorial in a game, but Advanced Warfare manages to do it in a way that doesn’t take you out of the fiction. As you’re walking to a shooting range, you can see a soldier in an exosuit taking on four soldiers at once. You also pass by a soldier who is climbing walls with magnetic hand clamps.

As Mitchell, you lose an arm in the first mission. Spacey’s character refits you with a prosthetic that works better than the real thing. That makes you think about the connection between humans and technology — and the capacity for turning both into killer weapons — in a more personal way. Hades, the Chechen terrorist who creates a global terrorist group dubbed the KVA, warns the world in a video that we have hidden behind technology. “I am here to liberate you from technology,” Hades declares. That sets up a classic battle of the modern world, between those who put their faith in technology and those who believe it is a curse.

As a private military corporation, Atlas by its very nature is more efficient than governments to act against terrorists. But you see a disturbing subtext here. Atlas may save the world from the KVA, but who will save the world from Atlas? That’s a subversive message for a Call of Duty game. After all, the good guys use every technological advantage they can get. And this is an exceedingly high-tech game with beautiful computer animations running on highly technical state-of-the art game consoles. And the story is telling you to beware of technology? That’s a bit mind-blowing.

Mitchell’s artificial arm is a constant physical metaphor for this theme, and the story returns to that half-man, half-cyber theme late in the game. There’s a bit of poetic symmetry here. William, Mitchell’s best friend, gets an arm caught in a door in the opening mission. Mitchell loses an arm, gets a prosthetic one, and becomes like The Six Million Dollar Man, rebuilt with better, stronger, and faster parts. And that arm plays a role in the end of the story. You don’t expect this kind of poetic resonance in Call of Duty.

Above: Call of Duty: Advanced Warfare starts with combat in Seoul

You start with a big battle in Seoul, South Korea, as the North Koreans invade. The combat shatters the glass of the modern buildings, and it takes you through corridors, alleys, markets and other places that really make you feel like you’re in the middle of a blockbuster movie.

The experience of fighting on the Golden Gate Bridge and then watching it collapse under your feet is one of the unforgettable “set pieces,” or the giant battle scenes with huge explosions that have been the hallmark of Call of Duty. The artists created an environment that looks like the real thing, down to the sorts of colors you’ll see in the landscape in any given day. After the bridge collapses, you have to move on to taking over a giant aircraft carrier. You get a constant feeling of “out of the frying pan, into the fire,” where one nasty firefight leads to something bigger.

These set pieces let you absorb a full range of the weapons of the future, whether you’re operating the missiles from a main battle tank or sniping at guards using a remote drone. 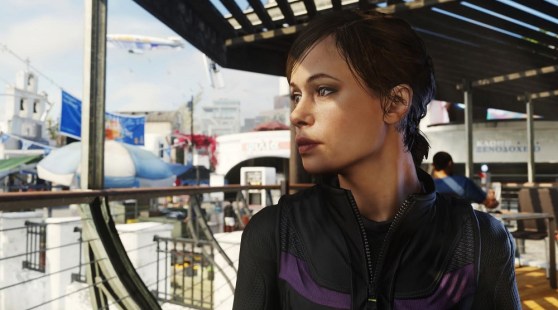 It wasn’t until the 10th Call of Duty came along, last year’s Call of Duty: Ghosts, that you could play a female character in multiplayer combat. But the game finally includes a female character who has more than a bit role. Ilona is one of the combat sidekicks in the game who can deal a lot of grief to the enemy. She takes care of herself and doesn’t need to be rescued. She still isn’t playable in the game, but at least she can set a few stereotypes on their heads.

Lots of people skip the single-player campaign and head straight to multiplayer or co-op modes. Our preview of Advanced Warfare’s multiplayer mode has full descriptions of a lot of the features, maps, and weapons.

Both multiplayer and co-op have new dimensions thanks to the Exo suit and the new kinds of grenades that reveal where people are hiding. The exoskeleton makes you a harder target to hit when you are jumping in the air, but it also makes noise that gives you away on the enemies’ minimap. That makes for more balanced combat. You can level up your character with 10 different custom options and choose from 350 weapons out of the box. During matches, you can gain bonuses such as remote turrets through supply drops, which land on the field, creating a race to get there first.

It also has a virtual lobby where you see everyone else’s characters. And you can customize just about every kind of gear, down to your knee guards. You can customize Scorestreaks, or the bonuses you get if you get so many kills in a row in multiplayer. If you meet some in-game challenges, you can also receive Supply Drops on the battlefield. You can customize those supply drops with certain kinds of weapons.

In Exo-Survival, or co-op mode, up to four players can join together and fight off wave after wave of enemies, dogs, drones, and other threats. If you fail to meet all of the challenges in a level, you have to deal with a tougher problem on the next level, like taking a bunch of attack dogs out with just a pistol. Sledgehammer has taken a lot of care to change everything about multiplayer without screwing it up. And so far, from my limited amount of play, I think they’ll make multiplayer and co-op fans happy.

I’ve played 53 minutes of multiplayer so far, and I’ve gotten 33 kills, but my kill/death ratio is 0.26, so i’ve got around 120 deaths. That’s not good, but it shows you what the online battlefield is like. I’ve ranked up 10 levels in that short time, as Sledgehammer is no doubt trying to encourage me to keep at it.