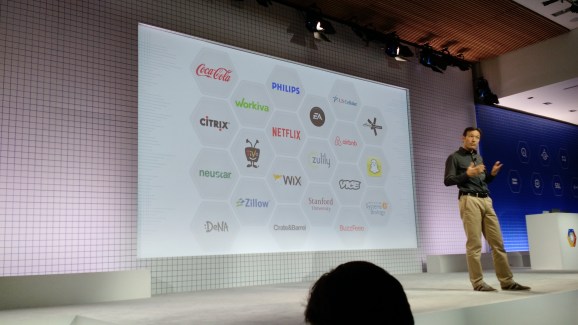 Updated at 5:44 p.m. Pacific on Wednesday with clarifications about Airbnb’s usage of the Google Cloud Platform.

SAN FRANCISCO — If you’re looking for proof that Google’s public cloud is taking off, well, Google’s got you covered.

Among the Cloud Platform customers Google teased today were Airbnb, Atomic Fiction, Citrix, Netflix, and Rovio, all of which have come forward as Amazon cloud customers in the past.

Amazon has long touted Airbnb as a major user of its cloud. Now Airbnb appears to be using the cloud market’s highly competitive nature as a way to get great deals with cloud providers. Developers elsewhere could well interpret Airbnb’s trust of a cloud as an indicator of good quality. That’s why mentions of major Amazon cloud customers on Google have an impact.

Announcements like cloud credits and the Container Engine service suggest that Google wants business from startups, but new peering capability and alliances with partners like PwC show that Google also wants to win the trust of big companies like newly announced customer Office Depot.

Presumably over time Google will add customers from small to large, and analysts have already observed that companies are interested.

That means over the next few years Google should be able to shake off its appearance for some as a cloud provider with many features and partnerships but few major customers.

At least Googlers want to see that happen.