Mobile Internet exits via IPO and acquisition skyrocketed to $94 billion in the last 12 months, according to a new Digi-Capital report (free summary; full version) led by the hottest sectors: messaging, games, and social networking.

No, it wasn’t all WhatsApp. And, yes, investors are making a very tidy chunk of change indeed.

“The massive Facebook/WhatsApp acquisition made the biggest splash, but a hot IPO market took 39 percent of all exits (50 percent excluding WhatsApp),” says Digi-Capital managing director Tim Merel. “While these big numbers are all impressive, the exit returns … are even more so. Nine mobile Internet sectors returned up to 15.6X all the money invested in them over the last three years.”

The growth is a startling jump not just from the previous 12-month period, but from the full previous two years, which saw exits in the $9.3 to $13.7 billion range. 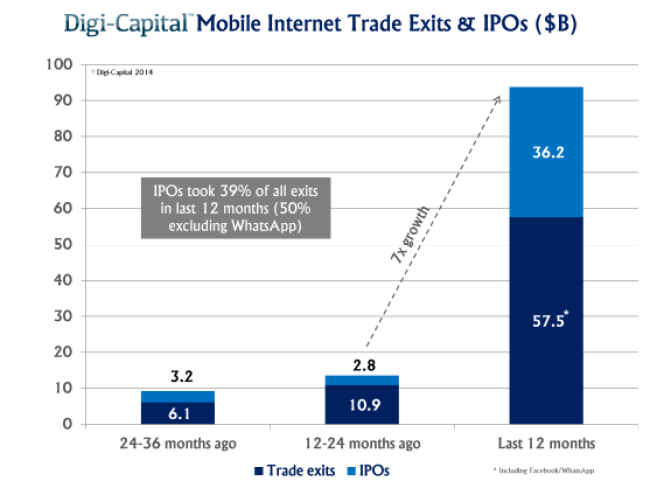 Digi-Capital defines the mobile Internet space as companies that are all or substantially mobile in nature. The company’s ranking of the current 32 billion-dollar-plus mobile Internet companies, including names such as Twitter, LINE, Square, and Kabam, will give you a taste of the sector, which has seen over $19 billion in investment over the last year and which is projected to hit $700 billion in revenue by 2017.

WhatsApp did drive messaging to become the hottest category, but games and social networking were not far behind. 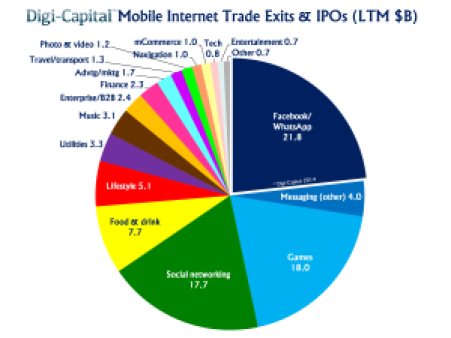 The five over $5 billion are:

And the nine over $1 billion include:

Investors have more reason to rejoice than simply the massive dollar value of these mobile Internet company exits, however. That’s because the more important numbers, their exit returns — the value of cash raised in IPOs or acquisitions — are positive. Across all 27 mobile Internet sectors Digi-Capital tracks, that return rate was 3.5X.

Respectable, but nothing to write mom about.

The best categories, however, had much better returns — up to 15.6X cash invested. 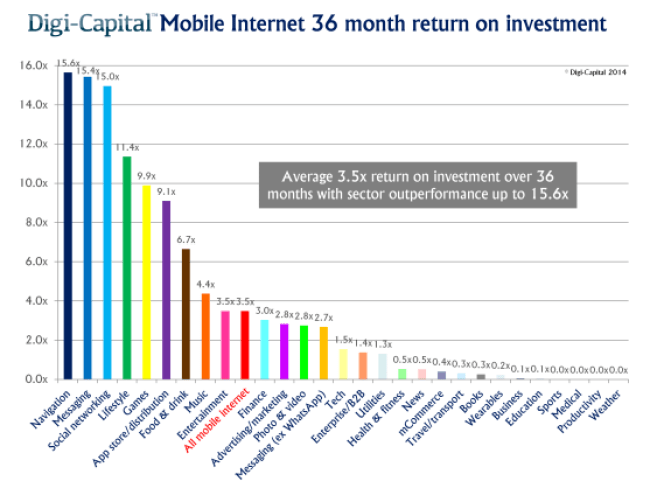 In addition, with the massive bump in exits in the past 12 months, short-term return on equity across all 27 sectors accelerated dramatically, Merel says, to 4.9X. Savvy investors — or lucky investors — who specialized in the hottest categories could have seen staggering one-year returns of 36.9X over that period, although typical investment time frames are longer, of course.

While this past 12 months has been hot, Merel says the good times are likely not over.

“After a bountiful year for mobile Internet investors, our analysis indicates the next 12 months could be even more rewarding.”