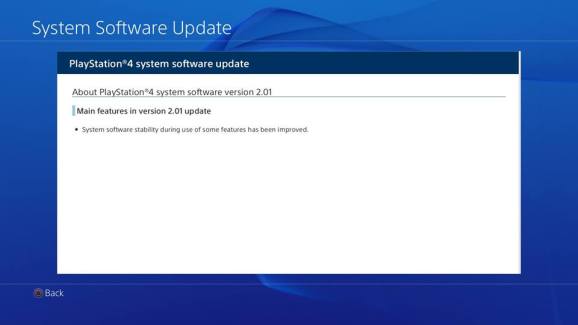 System update 2.01 should fix the problems many PS4 owners have been experiencing.

System Update 2.0 was a big step forward for PlayStation 4, bringing Sony’s streaming game-sharing solution SharePlay to the console, along with the option to play media from USB devices. It also caused a big headache for many gamers, however, as it made their consoles freeze when attempting to switch on from standby. Sony said it was working on the issue two days ago, and it’s now come up with a fix which it hopes will restore some faith among PS4 owners.

The official PlayStation Europe Twitter feed announced that system update 2.01 is rolling out today. I’ve already downloaded the update and can confirm that my console now wakes up properly from rest mode, rather than acting like a surly teen and refusing to stir.

PS4 software update 2.01 is rolling out today & will address issues some users have when powering on the system from Rest Mode.

There is no word on whether update 2.01 also fixes the network problems that publisher 2K Games blamed for the delay of its Evolve alpha test at the weekend. The cooperative shooter still struggled to work properly on PS4 even when 2K extended the testing period, with matchmaking proving a big problem on Sony’s console.