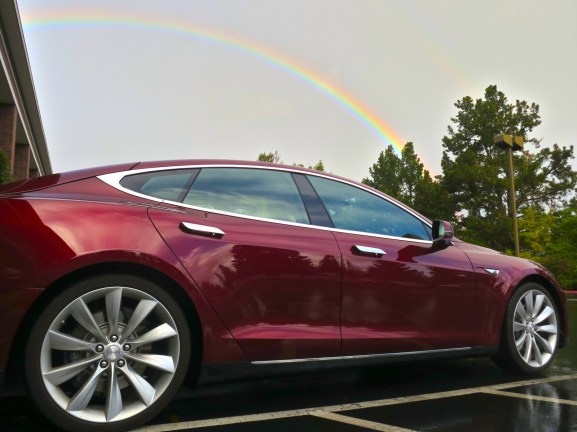 Somewhere over the rainbow, there's a Tesla Model S. And a pile of cash.

Today Tesla reported barely better-than-expected earnings of $0.02 and non-GAAP revenue of $932 million for its third fiscal quarter, up 55 percent year over year.

Sales weren’t much better. This quarter the company delivered 7,785 Model S vehicles, up from 7,579 cars in the second quarter — though the company was expected to reach deliveries of 7,800. Even operating expenses were up.

Still, Tesla’s stock was up in after-hours trading by over four and a half percent. That’s likely because Tesla says it plans on ramping up production in 2015.

“To accommodate accelerating Model S demand and prepare for the rapidly growing order book of Model X reservations, we are investing to increase production to more than 2,000 vehicles per week by the end of 2015,” the company said in a statement.

Telsa accepted fault for failing to speed up production so far this year, but said it wasn’t for lack of demand. The company shut down one of its production centers this year to transition to a higher output facility, which Tesla estimates cost the company 2,000 vehicles. Despite this Tesla expects to produce 50 percent more vehicles in 2014 than it did in 2013, and going forward.