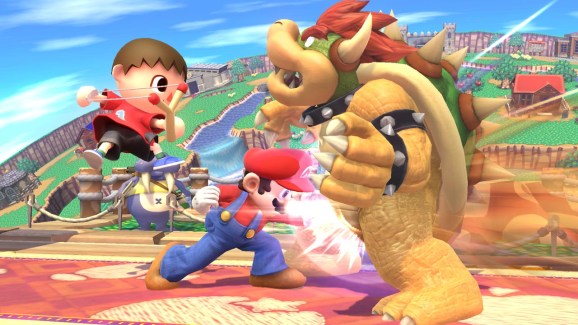 Mario hits below the belt.

Nintendo’s online network isn’t brimming with features like Xbox Live or PlayStation Network, but that’s not stopping it from making money from digital games.

Nintendo of America president Regie Fils-Aime confirmed that the digital eShop version of Super Smash Bros. for 3DS is selling very well. The executive explained, in an interview with Re/code, that retail is still the majority of Nintendo’s business, but some games can pop online and perform better than other releases.

Smash Bros. 3DS is one of those cases.

“What’s interesting is, game by game and at different points in time, you see a different consumer reaction,” said Fils-Aime. “Smash Bros. for 3DS — consumers wanted that game immediately. They didn’t even want to spend the time to get in their car and drive to retail to get it, so our digital percentage for that game is quite high — about 20 percent of the games sold here in the U.S. were digital, which is a pretty significant piece.”

Super Smash Bros. for 3DS has already surpassed 705,000 copies sold, and that figure is only through the first two days of sales. Of that total, 135,000 copies were digital. That means about one in every five U.S. gamers that bought Smash Bros. did so through the eShop.

That is way higher than what is standard for the gaming industry. Fils-Aime illustrated that by pointing to the character-action game Bayonetta 2, which just debuted for the Wii U.

“[Bayonetta 2 is] a huge game,” said Fils-Aime. “And it could take up a large part of the memory in the 32 GB Wii U. That’s a game with a digital percent on the lower side, today about 10 percent or so.”

While the Nintendo of America president said that 10 percent is the “lower side,” it’s actually pretty close to what most games on Xbox One, PlayStation 4, Wii U, and 3DS do. This is despite every new retail game going on sale the same day in stores and online on these systems.

In July, Electronic Arts said that even its biggest games don’t approach a digital ratio of 20 percent.

“I had mentioned on the last call that we were seeing somewhere in excess of 10 percent now for full game downloads on the Xbox Live and PlayStation network,” EA chief operating officer Peter Moore said. “We’re seeing that continue to grow. Now, it’s between 10 percent and 15 percent of the initial sales that is going digitally full game downloads on those platforms.”

Smash Bros. is illustrating that consumers are potentially trending faster into digital than previously anticipated — although it is probably just for games that they know they really want.

For Fils-Aime, all this means is that Nintendo needs to keep selling hardware to have as large a potential audience as possible.

“What third-party companies want is a large install base to sell their games into [as well as] a wide demographic footprint that they can target their games to,” he said. “They also want a robust connected environment so that they themselves can explore downloadable content or digital sales.”

On that front, Fils-Aime noted that the Wii U owner base has “almost doubled” since 2013, and he said that “just about every Wii U is connected to the Internet.