Streaming music startup 8tracks is launching a new version of its website today that’s focused on improving the discovery and creation of great playlists.

Unlike other services, 8tracks only lets you listen to music via user-created playlists. Because of this, the quality of playlists (the popular ones, anyway) is much better overall (think High Fidelity mix tapes). Because 8tracks operates under the compulsory license for webcasting, you can only skip songs a limited number of times on pre-existing playlists. The service is very popular among the college crowd (aka the coveted 18-24 age demographic), which accounts for over 40 percent of its total active user base of 8 million listeners. Only one percent of those users, however, are responsible for building playlists, which are 8tracks’ lifeblood. 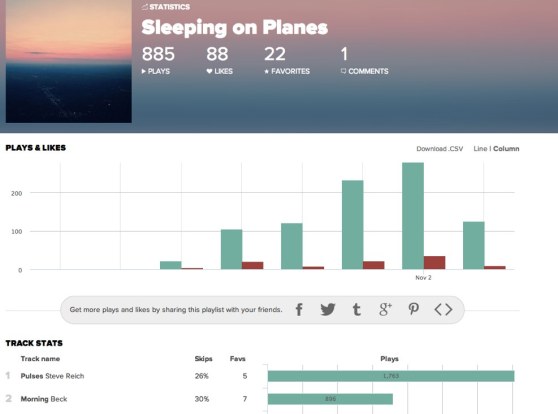 Above: Screenshot of the new DJ analytics on 8tracks.

The new update gives playlist DJs greater control over the playlists they’ve created. It also gives them listener analytics, which they can use to improve particular playlists and influence future mixes. For instance, DJs will now be able to see things like how often one of their playlists is listened to as well as the number of times people skip a track.

On the user side, the 8tracks website update also brings new discovery features. The site will attempt to learn your musical tastes based on your activity on the service, and then suggest relevant search tags and playlists.

“The right way to think about recommendations [for 8tracks] is that we’re essentially matchmaking between listeners and DJs,” 8tracks cofounder and CEO David Porter told VentureBeat.

“We want to understand your listening habits in a detailed way so we can best match you with playlists and DJs that reflect your tastes,” he added.

This is an area that Porter previously admitted the service needed to do a better job at, so it’s not surprising to see better recommendations. What’s pretty smart is that 8tracks is also adding tools and features to refine and improve playlists, which theoretically, should make it much easier to discover new playlists that you enjoy.

Founded in 2008, the San Francisco, Calif.-based startup has raised a total of $3 million in funding from Index Ventures, Andreessen Horowitz, SoftTech, SPA, and others.