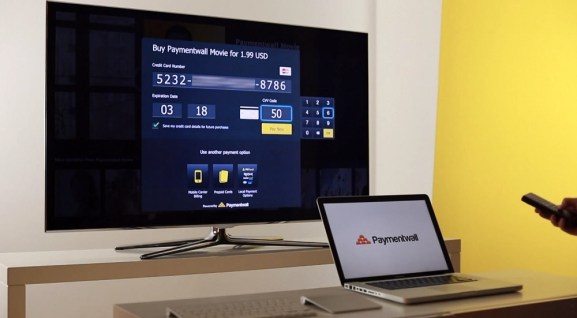 Paymentwall is hoping to fuel the growth of smart TVs by making it easier for people to buy things using them.

A global payment platform, San Francisco-based Paymentwall has assembled the software necessary to monetize digital goods and services. Today, it is unveiling PW Smart TV, a payment solution that developers can plug into their applications that run on smart TVs. Those applications can include games, movies, and other content on smart TVs, which are connected to the Internet. Market research firm NPD predicts that by next year, there will be more than 200 million Internet-enabled TVs in the U.S.

With the Paymentwall solution on their smart TVs, consumers can browse through applications using a remote control or secondary devices such as smartphones. When they see something they want, they can buy it. PW Smart TV enables the developers to accept payments from consumers worldwide through several easy checkout methods and more than 120 different payment options, including credit and debit cards, eWallets, bank transfers, prepaid cards, mobile payments, and more.

That helps solve a big problem as the payment options so far have been designed to cater mostly to customers in the U.S. Paymentwall’s software figures out where the users are paying from, and it displays local payment options that work in the specific region, even if it is in a developing nation. The company says it also simplifies the smart TV checkout process to increase conversion rates. Paymentwall says that making payments from a remote control has been a clunky and burdensome task that’s resulted in a lot of abandoned purchases.

“Many smart TV developers were struggling to make money; they had no way to cover the development costs and content licensing fees,” said Honor Gunday, the founder and CEO of Paymentwall, in a statement. “Paymentwall is giving developers and content providers a simple, effective way to collect payments for smart TV content directly on the device itself while providing users throughout the world with a plethora of global and localized payment options to choose from.”

Paymentwall’s solution has cross-platform functionality, allowing inputs via remote controls or other devices. It allows developers to accept payments in more than 80 currencies. And it has secure card tokens, making one-click checkout easier, the company said.

Guney Yasavur, the CEO of SPI International, said in a statement, “I’m extremely excited about the launch of this smart TV payments product. One of the biggest problems I’ve noticed as more and more smart TVs become available in the market globally is that the content offered on the smart TV isn’t actually accessible for many global customers due to a lack of payment solution tailored for smart TV and remote control. With Paymentwall’s new user interface, our subscribers can make their payments much easier and more securely.”

Paymentwall was founded in 2010, and it has 110 employees. It says it has processed payments for more than 150 million unique users across more than 50,000 merchants. Rivals include Braintree (part of PayPal), Apple Pay, Stripe, Boku, and Adyen. Paymentwall is self-funded. It started as an alternative offer-wall provider when Facebook gaming was thriving. Paymentwall set up a technology platform that would enable the developers to accept not just credit cards and mobile payments but other solutions like prepaid cards, digital currencies, and eWallets.