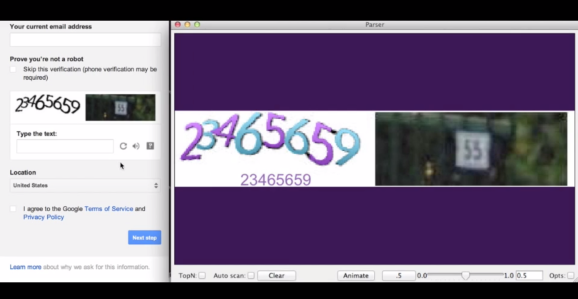 The Vicarious algorithm demonstrates its chops at solving Captchas.

Artificial intelligence company Vicarious is raising a significant new round from ABB Technology Ventures and others, just months after closing a $40 million series B.

The new funding is an indication that more investors are buying into the still-young startup’s claims to have a truly revolutionary technology. Vicarious says its algorithms are aimed at achieving “human-level intelligence in vision, language, and motor control,” and it has been focusing first on visual perception.

Vicarious claimed in October, 2013 that it had “passed the first Turing Test” by using its vision algorithms to solve login captchas with an accuracy of 90 percent. Captchas are the images that contain visually scrambled letters or numbers, usually requiring a human to decipher them since ordinary optical character recognition algorithms won’t work with all the visual “noise.” It’s quite a stretch to call that a Turing Test, but Vicarious’s technology — if it’s as effective as the company claims — would render captchas useless as a means of figuring out whether there’s a human on the other end of a Web form, which is how they’re frequently used.

For its part, ABB sees the startup as a strategic investment. ABB Technology Ventures is the investment arm of ABB, a global powerhouse in power and automation technology, employing 145,000 people worldwide. An artificial intelligence startup with robotics applications dovetails with ABB’s aims quite nicely, according to both companies.

“This partnership is a perfect fit. ABB is a pioneer in the robotics industry, with a global installed base of more 250,000 industrial robots to improve productivity, quality and worker safety, while Vicarious has positioned itself to do the same for AI,” said Girish Nadkarni, Head of ABB Technology Ventures, in a press release.

“Vicarious is excited about where this partnership will take us in the years ahead,” said Vicarious co-founder Dr. Dileep George, in the same press release.

Vicarious had previously raised $56 million, most recently with a $40 million series B round in March, 2014, from investors including Formation 8, Mark Zuckerberg, Elon Musk, Peter Thiel, and Ashton Kutcher. Facebook co-founder Dustin Moscovitz sits on the company’s board. It is based in Union City, California.