The unicorn of electric vehicles, Tesla Motors’ crossover SUV Model X, has been delayed once again despite tons of attention from EV geeks and a projected high demand for consumer orders.

The recent news of a delay, announced during yesterday’s earnings call, means that current Model X depositors won’t begin to see deliveries until Q3 2015 rather than early 2015 as was previously promised. Anyone placing a $5,000 preorder for a Model X today won’t see the vehicle until 2016.

When probed about why, Tesla CEO Elon Musk was able to deliver somewhat positive news: the fundamentals of the vehicle are sound. The all-wheel-drive, dual-motor Model X shares much, if not all, of its drivetrain with the recently announced Model S P85D, the fastest four-door sedan yet made. The auto-enthusiast publication Motor Trend was lucky enough to test the new drivetrain recently and gave it a favorable performance rating, managing to eek out a tenth of a second on the dual-motor performance version of the Model S’s official 0-60 time of 3.2 seconds. The Model P85D comes at a cost of $120,000 and higher, and Tesla should starting delivering it to customers in February.

So why is the X delayed? While the alpha and beta versions of Model X are complete, full-scale production is several months off — and that’s a good thing according to Musk.

“Making one of something is easy,” he told shareholders.

Musk’s point is well taken. In order for Tesla to efficiently produce myriad vehicles, its automated assembly lines need to be calibrated to perfection. This isn’t a question of simply hiring more people, rather, it has everything to do with properly training robots (seek to the 8:21 mark) to perform extremely specific tasks in order to deliver the high-quality products that Tesla wants to continue to produce. Complicated gullwing doors, rear seats, and high-end body panels top the list of items that need to be perfected before mass production can begin.

A constant challenge for the automaker, Tesla is finally beginning to get a handle on their automated mass-production processes. The company expects to deliver at least 50,000 vehicles next year, up significantly from 2014’s expected production run of 33,000.

Given Musk’s admission that Model X is “quite special,” it’s easy to see why his focus is so discriminating. Earlier this week, Consumer Reports — which called Tesla’s Model S the best automobile that they had ever reviewed — released a reliability score of “average” for the flagship vehicle that was not in line with the company’s recent accolades.

To be fair, “average” means that the Model S sits under market reliability leader Toyota/Lexus but above the likes of Mercedes-Benz and Acura. Considering that Mercedes-Benz produces some parts for Tesla, this news begins to appear more novel rather than worrisome. Still, Tesla’s mission is not only to “facilitate the mass production of electric vehicles” as Musk stated during yesterday’s call, but also to build the best autos in the world. And average on any level means it isn’t the best.

To that end, Tesla’s made it clear yesterday that it’s not taking criticism lightly. Many of the Model S foibles and problems mentioned by review sites like Edmunds and Consumer Reports were defects that were later ironed out in the production line some time ago. Drivetrain issues are covered by an eight-year, infinity mile warranty, and yet more issues are often taken care of at the local service centers for no charge to the consumer.

Referring to this obsession with quality, Tesla’s Q3 investor letter directly addresses the concerns of shareholders by stating that their perfectionism is, indeed, “a legitimate criticism of Tesla.”

We recently decided to build in significantly more validation testing time to achieve the best Model X possible… There are many other companies that do not follow this philosophy that may be a more attractive home for investor capital. Tesla is not going to change.

In other words, if you’re looking for short-term profit at the expense of Tesla’s reputation for quality, sell your stock. 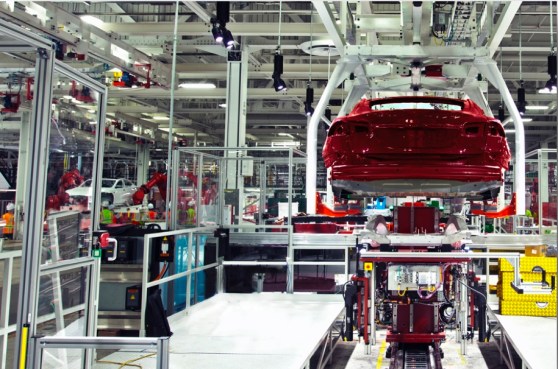 Above: A Tesla factory

See, Tesla isn’t an average luxury car company. It’s mission has always been “to facilitate the mass adoption of electric vehicles.” The company’s master strategy started with phase one: the provision of a luxury performance proof of concept vehicle. That vehicle, code-named Dark Star, became the Tesla Roadster. The White Star project, phase two of Tesla’s strategy, was to be a far more affordable (but still expensive) four-door family sedan, which became the Model S. The third and final phase of Tesla’s plan was to release the Blue Star project — a $35,000 electric vehicle that would not only be appealing, but also affordable for a vast majority of the population. The Blue Star is the code name for the upcoming 2017 Model 3.

The trip down memory lane shows that the Model X SUV’s delay may also be due to the fact that Model X is not extremely important to Tesla’s overall strategy.

While Model X is certainly attractive to a segment that doesn’t compete with those interested in Model S (i.e. the people who want performance sedans are not often the same people who want crossover SUVs), Model X isn’t directly tied to the Model 3 — the focus of Tesla’s efforts over the last decade. The Model X is a bonus vehicle that will almost certainly serve as a halo over the workhorse Model 3 and the high-end Model S vehicles.

To that end, Tesla’s focus is on getting this vehicle — which should be it’s highest margin product — exactly right. And that’s going to take a few more months.