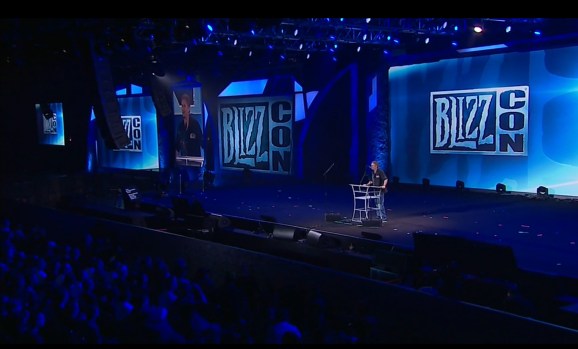 BlizzCon’s opening ceremony started with a bang this morning, as Blizzard Entertainment president Mike Morhaime spent the first part of his speech denouncing GamerGate — without once mentioning its name.

The keynote opened the annual convention at the Anaheim Convention Center in California focusing on Blizzard Entertainment games, including World of Warcraft, Hearthstone, and StarCraft.

Under the banner of GamerGate, a subgroup of gamers have published private information, photos, and even threats of death and violence, targeting primarily female developers and journalists. Morhaime never invoked the name of the group, but he said instead that over the past couple of months, a small group of people have done terrible things.

“They have been tarnishing our reputation as gamers. It’s not right,” Morhaime said. “BlizzCon is a great example of how positive and uplifting gaming can be.

“There is another person on the other end of the chat screen … let’s take a stand to reject hate and harassment. Let’s redouble our efforts to be kind and respectful to one another. Let’s remind the world what the gaming community is really all about.”

Morhaime also announced the creation of a new in-game charity pet available for purchase, with 100 percent of proceeds going to the American Red Cross’ efforts in the fight against Ebola, the deadly disease ravaging parts of West Africa.

“It has been really rewarding to partner with you to assist worthy causes in the past, and we’re honored to continue the tradition this year,” he said. Morhaime didn’t reveal what the pet would be. In past years, charity pets have sold for $10.

[Update: Blizzard posted a photo and more details about the pet.]