Microsoft’s first shot in the fitness tracker space is a solid one. The company spent a lot of time developing its $199 Band bracelet, even as the fitness wearable market heated up. But fitness trackers are still making their way into the mainstream, so Microsoft may be making it to the party at just the right time. And it has benefited from taking the time to get its product (mostly) right.

I’ve been wearing the device for a few days now, and while I definitely have my complaints about its performance, interface, and app, I definitely feel like I’m getting $200’s worth of fitness tracker. In short, I think the Band — in combination with its companion app, Microsoft Health — will compete well against similar trackers from companies like Fitbit and Jawbone. 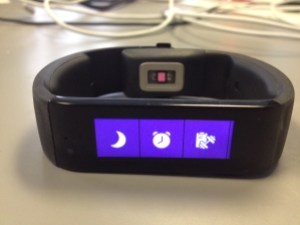 Above: The Band’s “tiles” interface design worked well on the small display.

The Band’s user interface features the “tiles” design used in Windows phones, and I thought it worked well on the small display. It amounts to a horizontal line of 11 tiles that you can scroll through, with the option of tapping on any of them to open functions like sleep, custom workouts, settings, etc. For instance, when you tap the “messages” tile, you drill down to the actual texts of the messages.

The very first tile in the line, which displays time and heart rate, is wide enough to fill the whole screen. You tap that tile to drill down into more information on step count, calorie burn, miles traveled, and heart rate.

Interestingly, Microsoft says the Band doesn’t run an OS but just a piece of firmware designed to integrate with iOS, Android, or Windows phones.

The Band’s touchscreen isn’t terrible, but I did get the impression that it was one of the components that suffered from the need to keep costs down, given the device’s $200 price point.

I found that I sometimes had to repeat my taps on the touchscreen and had to tap very deliberately with the front of my finger to make anything happen. This can be especially problematic when you’re walking around and need to check a quick message. 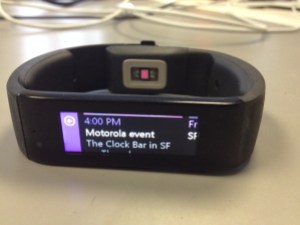 Above: The Band had no problem pulling notifications from my iPhone 4S.

Like some other fitness trackers that are showing up now, the Band steals a few tricks from the smartwatch category. I didn’t expect to, but I appreciated the ability to quickly look down to see who had called or texted.

Getting reminders from my calendar worked well for me too. Actually reading the content that comes in with these notifications is a little clunky, but that’s a function of the small size of the touchscreen.

The companion app that runs on your phone, called Microsoft Health, manages and displays much of the information the Band gathers. It too uses the tile design to organize data, and the app’s tiles correspond to the tiles on the Band. 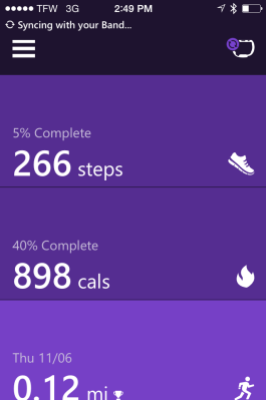 Again, you tap on the tile to drill down to see the actual biometrics data collected by the Band, as well as graphical representations of things like sleep or heart rate trends and GPS maps of your runs or bike rides. I found the app easy to use and had no trouble quickly finding the data I was looking for. And it’s true that the more data you collect, the more interesting and meaningful the charts in the Health app become.

The Band’s optical heart rate sensor faces the bottom of your wrist (if you’re wearing the display facing up at you). It not only tracks resting heart rate (a key indicator of health) but also contributes to the data used to calculate things like calorie burn and sleep quality.

To test the accuracy of the heartbeat sensor, I took my own pulse for a minute and compared my result to the Band’s. The Band proved to be reasonably accurate. In two of my one-minute tests, the Band counted a few more heartbeats than I did, and on a third test it was exactly correct.

However, I’ve glanced down at the Band a couple of times and seen that my resting heart rate was 51 beats per minute. Athletes in top physical shape can have resting heartbeats that low, but I don’t. 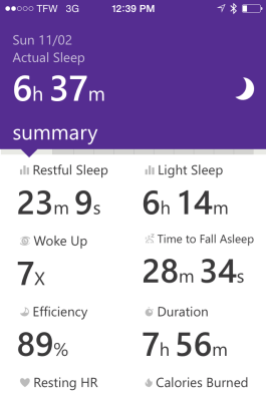 The Band’s sleep tracking function is particularly interesting, and a little suspect.

The Band’s product manager, Zulfi Alam, told me the Band uses “a fusion of different sensors” to create a sleep profile of the wearer. These sensors include the accelerometer/gyroscope and capacitive sensors, which sense the body’s movements while sleeping; and the optical heart rate sensor. “In addition to sleep efficiency, we are also detecting things like heart rate spikes and true resting heart rate,” Zulfi wrote in an email to VentureBeat.

I was a little uncomfortable wearing the Band to bed, but it didn’t create much discomfort during the night. When you’re ready to go to sleep, you slide to the sleep tile and hit the small button twice to start the sleep monitoring functions.

But the results I saw in the app the next morning made me wonder if the information provided by the movement sensors and heart rate monitor was really enough to provide an accurate account of my sleep. 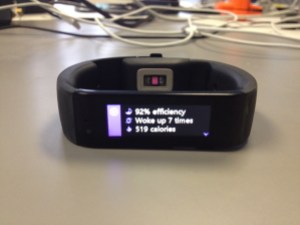 Above: The Band provides a summary of your sleep performance.

The Band monitored my sleep for an almost eight-hour period, but I was actually asleep for only 6 hours and 37 minutes of that. I can’t account for the other 1 hour and 19 minutes — I thought I was asleep all night. And out of the 6 hours and 37 minutes I was supposedly asleep, only 23 minutes of that was restful sleep, according to the Band. I sure felt well rested the next day for getting so little restful sleep the night before.

The Band sets a 5,000-steps-a-day goal for you, which I found hard to reach on weekdays but easier to reach on weekend days. The Band doesn’t have an alert to remind you when you’ve been sitting too long, but simply having it on my wrist made me more mindful of the need to get up and count some more steps.

As far as I could tell, the step count was at least roughly accurate. And I’ll admit I got a little thrill when the Band vibrated and praised me for reaching my step goal. 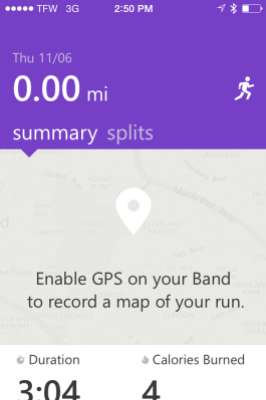 Above: If I could have gotten the GPS radio to connect to the satellite, my run route would have displayed on this screen in the Microsoft Health app.

To start a run, you tap the tile with the little running man icon. You’re then asked if you want to run with GPS on so you can track your route. While you’re running, you can glance down and see how long you’ve been at it and how many calories you’ve burned.

It also displays heart rate, which worked well for me because it’s important to me to keep my heart rate above 120 for 30 minutes during workouts. The one thing I didn’t like is that, in order to see how many miles I’d covered, I had to pull down another pane from the top of the watch’s screen, and this is difficult to do while you’re running.

I was looking forward to seeing how well the Health app mapped my runs, but this wasn’t to be. As I was walking around my neighborhood over the weekend I tried several times to get the GPS radio to connect with the satellite, but it never connected. The skies were completely clear both days, leaving the Band a clear line-of-sight path to the satellite.

I found the custom workouts offered by the Band (and the Health app) matched up pretty well with my fitness level. You can choose from a number of workouts that were designed by Microsoft Partners like Gold’s Gym.

I moved completely through one of them, the “Alt. Lunges and Crunches” workout, and I was pretty gassed at the end. 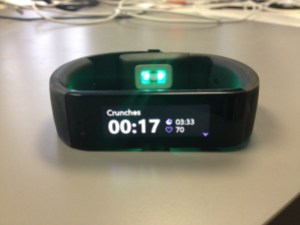 Above: The Band guides you through pre-designed workouts from partners like Gold’s Gym.

You start the workouts by double-pushing the smaller of the two buttons on the underside of the display. The watch then tells you what exercise to do next and gives you a set duration in which to do it. The display shows a seconds countdown while you’re doing the exercises.

Next it gives you a timed rest period, with the name of the next exercise you’ll do. At the end of the workout, the Band displays your average and peak heart rates during the workout and the number of calories you burned.

I’m not a wristwatch wearer, so testing fitness trackers is always a little uncomfortable for me. But after about a day of wearing the Band, I got used to it and was able to go long periods of time without remembering it was on my wrist.

The Band isn’t the most streamlined thing in the world, design wise. But there’s a lot of technology jammed into this little device, and the design seems to accommodate it all without compromising comfort very much. 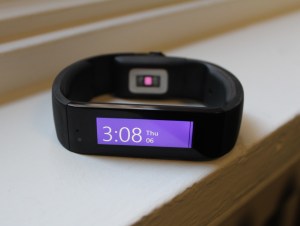 Whether or not you like the look of the Band is another story. That’s subjective. Compared to devices like the Jawbone UP24 and the Apple Watch, the Band isn’t that stylish, but it’s not ugly. I preferred to wear the bracelet with the display on the underside of my wrist and the heartbeat sensor on the inside of the band on top of my wrist.

Despite the Band’s flaws, Microsoft got the basics right. For people who are interested in getting a bit more scientific about their diet, exercise, and general health, the Band might be a welcome stocking stuffer.