Update on Nov. 8 at 11:21 a.m. Pacific: Corrected to reflect the printer’s resolution which is 10 mil, not 10 millimeters, and to the timing of its fundraising plans.

Cyril Ebersweiler, hardware accelerator Haxlr8r’s founder, believes that if hardware startups learn how to prototype, iterate, and manufacture quickly, they can launch a consumer product within months and without much capital.

So it’s not surprising that Voltera, a startup that built a low-cost circuit board printer, was among the accelerators graduating companies yesterday. Voltera’s printer aims to do for circuit boards and prototyping what MakerBot did for the Maker movement with its low-end 3-D printer.

The printer itself, the V-One, is actually a three-in-one tool: a circuit board printer, a solder paste dispenser, and a soldering oven. Customers can order whatever combination they want (a paste dispenser, an oven, or both, and so on). Currently, it prints on the circuit boards with silver nanoparticle conductive ink, which has the highest conductivity, cofounder Katarina Ilic told VentureBeat.

But as it’s Voltera’s first version, the printer still has limits. Although Voltera’s team can print at six thou (0.152 mm) trace width, Ilic said the upcoming V-One will print only at a minimum trace width of 10 thou (0.254 mm), with a maximum of two layers to guarantee reliability.

Just as 3-D printing companies are still refining the technology — and entrepreneurs and industries are learning how to leverage it — Voltera’s enterprise is still in the early stages. The goal is for big companies one day to print their prototypes’ circuit boards or even use it for real products. But for now, Ilic said, Voltera is starting with hobbyist and the Maker movement. Other similar printers, such as the Squink, also aim to help hobbyists prototype circuit boards quickly.

Engineering students Alroy Almeida, Katarina Ilic, James Pickard, and Jesús Zozaya created the genesis for Voltera as a capstone project at Waterloo University in Canada. (And as engineering students, they personally saw the need for low-cost circuit board printers.) The team received a few grants from the university, as well as the Canadian government, to enable them to pursue the project.

The team plans on raising a small angel round during its Kickstarter campaign, which will launch in early 2015. At the launch of the campaign, it will cost $1,500 for the printer, $75 for an ink cartridge, $50 for the dielectric ink, $40 for the paste, and $30 for a set of 10 substrates. 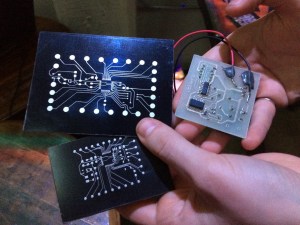 Above: Boards printed with Voltera’s V-One