This, of course, is significant because the television industry finally seems ready to accept that TV viewing is moving online. Last month saw both HBO and CBS announce that they were preparing to launch standalone streaming video services that do not require customers to already pay for cable or satellite television service. CBS in particular is even launching its own online TV news network. Bloomberg TV, however, started way back in 2011, and it’s seeing a lot of success as a result of not waiting around.

Bloomberg told VentureBeat that its strategy has led the company to see one of its best months in terms of online TV and over-the-top (OTT; any TV content delivered outside of a cable or satellite TV provider, such as Comcast or DirecTV) viewership growth.

In September, the company saw video stream viewing increase 12 percent to 72 million videos, compared to 64 million streamed in August, according to ComScore. Bloomberg also more than doubled the number of unique viewers for video content to 9.2 million compared to the same time last year.

“We know our audience, which is business leaders. And we know they don’t really think in terms of over-the-top, second screen, or … devices. They think in terms of getting smarter, faster,” Bloomberg head of digital video Paul Marcum said in an interview with VentureBeat. “Our job is to make sure our video content is delivered to them wherever and whenever they choose.”

By that, Marcum means Bloomberg’s decision not to block access to the live broadcast of its TV network online (as well as on-demand videos) — meaning you don’t have to authenticate that you’re already paying for Bloomberg via cable or satellite TV monthly service. This logic is what led the company’s business news channel to become the first cable network available on the now-deceased OTT service Aereo as well as becoming the first news app available for Apple TV.

He and Marcum added that along with making the linear TV network available online, Bloomberg has also invested in technologies that ensure the live video stream uses a high bit rate for a clear viewing experience that doesn’t lag. This is something other cable networks probably haven’t factored in. So while you may be able to get more network TV online, chances are that you’ll experience buffering and fuzzy video quality.

Another part of Bloomberg’s OTT strategy involves identifying video segments related to written articles from Bloomberg’s website. The company revealed that 45 percent of the people navigating to the website end up watching video content, which would indicate that the strategy is working.

Building a TV network for a ‘TV-optional’ era

Bloomberg also revealed that it saw 1.2 million people streaming video content from its OTT offerings. This prompted the company to launch a group dedicated to OTT ad sales and partnerships, with the sole purpose of translating the OTT side to the rest of the company’s business strategy.

“There are subtle differences in advertising between what’s on air and digital, but by and large our strategy has been to keep things as uniform as possible while also making sure to translate the viewing experience for every new platform [Bloomberg TV] is on,” Marcum said. “But there isn’t a cookie-cutter strategy for getting Bloomberg on new devices. We translate each for the best experience.”

The reason it’s taken so long for other cable networks to catch up with a strategy for online TV has a lot to do with, of course, money. Three years ago, TV networks weren’t able to accurately measure people viewing programming online, or more importantly, to translate online viewership stats to the industry’s standard ratings for traditional TV. In fact, it’s only in the last month that ratings company Nielsen forged a partnership with Adobe to start developing such measurements.

Point being, there are a lot of different operational changes necessary for a full push to online TV, which is something Bloomberg was able to identify early on.

“We’ve rebuilt how we publish, create, and produce our videos specifically around digital. And now we’re seeing the fruits of that labor come to form,” Marcum said. “We can quickly adapt, and go out on multiple platforms very, very fast.”

“I actually think a lot of TV networks did try to create an online TV strategy… it just didn’t [work],” Venture Scanner TV analyst Nathan SooHoo told VentureBeat. He explained that early on he noticed CBS trying to provide access to some of its content online, such as episodes of Big Bang Theory, but the experience wasn’t great, and certainly nothing like watching programming on Hulu.

SooHoo said Bloomberg TV might be a special case when it comes to finding success in translating its business model from television to online TV.

First of all, Bloomberg’s content is primarily timely news. So providing people with easy access to the live TV broadcast makes sense because, unlike scripted content, it has a much shorter shelf life. Therefore, you’re sort of shooting yourself in the foot by making it difficult to access. 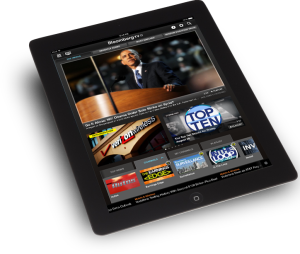 Second (as Fenton previously stated), Bloomberg knows its audience very well, and that audience is made up of business-thinking viewers who value constant access to information from video content as well as the data terminal (aka an advanced “financial ticker”) displayed on-screen during a broadcast. It just so happens that Bloomberg’s audience is also perfectly matched for the current trend of online video viewing behavior, too.

“We’re seeing this a lot in the industry right now with multichannel networks being acquired or invested in by big media companies,” SooHoo said, noting recent examples like Disney’s $500 million purchase of Maker Studios and Chernin/AT&T joint venture Otter Media’s investment in Fullscreen.

Multichannel networks are companies that invite popular video creators (usually from YouTube) to partner up to enjoy the perks that a larger network can offer, such as better distribution, advertising, and more. And unlike TV, content produced by these multichannel networks doesn’t need to be episodic to gain popularity. Video content can exist on its own, or part of a series.

I asked SooHoo if big multichannel networks were getting gobbled up by media companies because they offer the chance to “catch up” on producing successful content for the online age, but he didn’t think that was the case.

“It’s just a different audience. But one that’s becoming more valuable,” he said, noting that Bloomberg seems to have identified this opportunity early on.

What’s also interesting is that CBS just launched its own 24-hour online TV news network called CBSN, presumably having observed strategies by Bloomberg and a few other successful multichannel networks geared toward current events coverage. CBSN also isn’t primarily focused on business-related news, and many — SooHoo included — are curious to see how it will fair.

As for Bloomberg TV, execs Fenton and Marcum see a bright future in online video, and has plans to expand coverage of technology, international markets, and even new verticals.