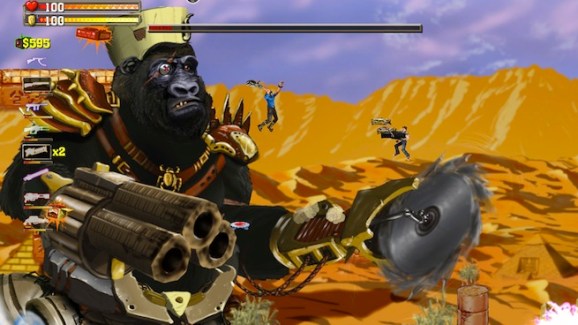 Mommy’s Best Games is one of the most interesting developers operating today. You always know when you’re playing one of its games because you spend half of your time in disbelief that stuff this insane even exists. This is a company that made one game in which a certain room is inescapable until you’ve built a sufficiently high tower of monster corpses to jump from and another where a girl in a hoodie kicks ads to death.

This stuff is out there.

Its newest project, Pig Eat Ball, comes out soon, and GamesBeat interviewed company president Nathan Fouts to find out where all of that crazy comes from.

GamesBeat: Last time we spoke, I commented that Mommy’s Best is kind of the [microbudget movie studio] Troma of video games. Let me walk that back and explain it, because it’s possible you could be offended by that. It is a compliment.

GB: For starters you are self-sufficient. You are viciously independent. 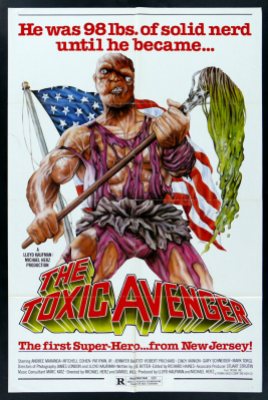 GB: But also, the way I describe Troma is, and this doesn’t necessarily translate to you, but it embraces the “dumb.” And it makes it as fun as possible. The Toxic Avenger is a janitor who falls into toxic waste and becomes a crime fighter. Like that’s dumb, but it’s also hilarious.

NF: Right right, I think that fits with Serious Sam, when I invented the Gunstacker.

NF: I mean, it’s not stupid and boring. I always try to be mindful of a gamer’s time. Just to show them something really cool. I personally find all of the original weapons in the earlier games to be generic and boring, but I do like playing them. So I thought, “What would Serious Sam do to amp this shit up?” That was the Gunstacker.

GB: It’s kinda got the Adult Swim filter. The trailers for that were amazing.

NF: Yeah, they were pretty great. I was barely involved in the trailers, but they tried to beat the Gunstacker in the trailer. Like they were like, “This is the single greatest concept of the century. How are we gonna beat that in trailer form?” So they went nuts with it. And it came out awesome. They came out so good.

Huff, the crazy guy in the first trailer? We never knew of him. So when we did the XBLA version, I wanted co-op. Everybody wanted co-op. So I started working up some designs for a second player character. Hologram Sam, he’s your brother, he’s this other guy, military guy, we pulled out the black guy from the multiplayer in Serious Sam and we did all kinds of art for it. And I don’t know what happened, but we were just like, “Oh shit, what if we could get Huff from the commercial?” So we got his likeness, we talked to the actor, and he loved it.

That guy is unstoppable, so funny as a voice actor. We had so much stuff from him, I tried to use a ton of it.

GB: Right, and I love that you get different dialogue in the co-op.

NF: We had him scream “Gunstacker,” and he did a whole bunch of takes on that, so I even put some of those in as his death cry. Like one of them he just goes, “Ohhhh Stackity, oh Stackity Stack Stack.” Like, it didn’t make any sense, just crazy. Yeah, he’s a lot of fun. 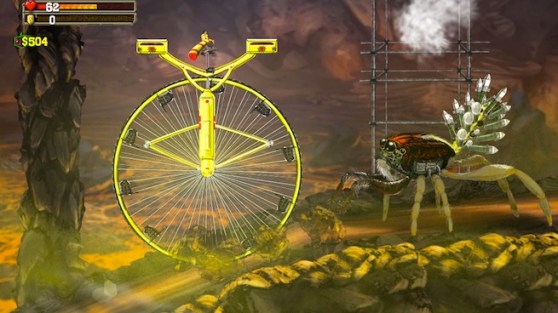 GB: I think the other thing I really loved in that game that was also ridiculous, and kind of overshadowed by the Gunstacker, is the stacking of monster corpses as a gameplay mechanic.

NF: I’ve played the Serious Sam games, and I love them. But what’s funny is that you look back, and the box art for those is Sam standing on a pile of corpses. And that’s like a classic motif in a lot of other games, too. You’re victorious, you’re on all these fallen enemies bodies.

NF: Right, and it never happened in the game! It never happened in the game, are you kidding me? We can’t do this? So at the beginning of that third level, I basically put you in that pit and let people figure it out. You just keep killing the Gnaar guys, and you naturally have to jump to avoid them, and you start seeing yourself getting higher and higher. We have that level in a bunch of shows and demos and play tests and the look on people’s faces is priceless. I like to not spoil it; they just get to figure it out naturally and enjoy it. It’s the best.

So we had stacking guns, stacking corpses. I called it “Corpse Piling,” and that was a bullet point, like “Corpse Piling Technology.” And then the Vuvuzelator was the sentient stack of pancakes. I tried to carry the “stacking” theme throughout.

GB: It’s a motif. And it really says a lot about Sam’s character, and it’s just fucking awesome, right?

NF: Yeah, exactly. It’s all the worry and the pressure that just keeps stacking onto his mind.

GB: Yeah, just the weight of the world is like …

NF: … stacked on his shoulders. He has to blast it apart.