Video game broadcaster Geoff Keighley is unveiling The Game Awards 2014 as the première show for big game announcements and awards in the game industry. The show will replace the decade-old VGAs, which Keighley previously hosted as a glitzy, Hollywood-style awards event where the game industry anointed its rock star developers. 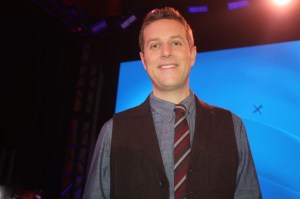 SpikeTV was the longtime host of the show, but it pulled out this year. Now Keighley will be the producer of a new show, which promises to be equally glitzy and includes the support of the biggest companies in the hardcore gaming business. The show will take place on Dec. 5 starting at 6 pm at the Axis Theater in Las Vegas.

The show will have both awards and world premieres. It will also focus more on game developers and industry and include eSports and community awards, so that both game developers and game players can be honored on the same stage. The show won’t be televised on a particular channel, but it will be livestreamed around the globe. The show will feature musical performances, but it will be built around the idea that video games are at the center of modern entertainment and culture, according to Keighley.

“The Game Awards 2014 will celebrate our collective love of games and the passion we all hold in our hearts for this incredible entertainment medium,” said Keighley, in a statement. “Gaming has never been stronger, and this year we will recognize the fastest-selling launch year in history for new game consoles, the rise of eSports and mobile gaming around the globe, and preview the games that will make 2015 the biggest year yet.”

Public tickets for the awards will be available for sale via TicketMaster on Tuesday, November 11.

“The Game Awards is a special event to honor the achievements in gaming, our talented developers and devoted fans. We look forward to celebrating the power of games this December,” said Guillemot at Ubisoft, in a statement.

The other advisory board members also issued statements in support of The Game Awards. Sony will have its own PlayStation Experience event for retailers on the weekend after The Game Awards.

“PlayStation looks forward to seeing our fans and celebrating with them both at The Game Awards and The PlayStation Experience in Las Vegas this December,” said Leydon at Sony, in a statement. “For those who can’t join us in person, we will be livestreaming the weekend on PlayStation Network.”

“Valve is excited to share The Game Awards with over 100 million users on Steam around the world,” said Gabe Newell, Co-Founder and Managing Director, Valve. Alongside the free livestream, Steam will offer a special limited time Steam Sale as part of The Game Awards 2014 broadcast. More details will be announced closer to the event.