As expected, Microsoft today announced the Microsoft Lumia 535, available in single-SIM and Dual-SIM versions, the first smartphone from the company without Nokia branding. Both devices are priced at an estimated €110 ($136) but that’s before taxes and carrier subsidies; exact figures will naturally vary by market and operator.

Microsoft says the Lumia 535 and Lumia 535 Dual SIM will begin rolling out to “key markets” in November. While the company didn’t share a full list of countries, it did share that the devices will hit China, Hong Kong, and Bangladesh first.

Microsoft is calling this its “5x5x5” smartphone package, as it features a 5-inch screen, as well as 5-megapixel front- and rear-facing cameras. If you’ve been following the leaks, the specifications we’ve seen earlier were correct.

The 5-megapixel front-facing wide-angle camera is the same one you’ll find on the Lumia 730 and Lumia 735. Microsoft is betting big on selfies. The rear-facing 5-megapixel camera includes flash, which is a big deal for such a low-end device. 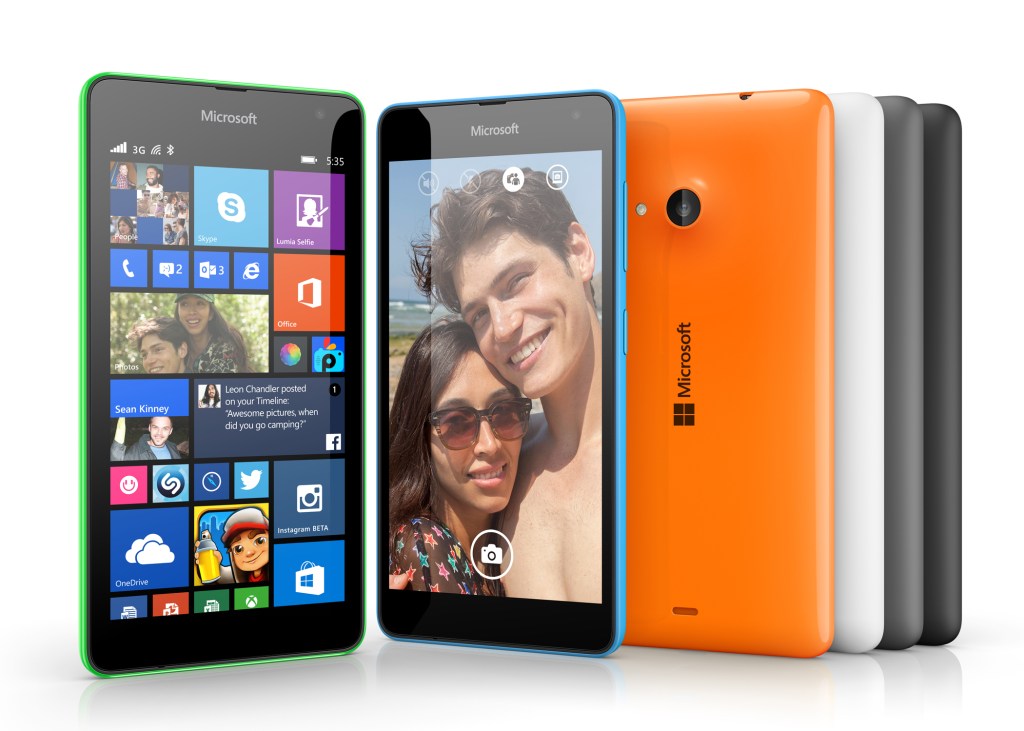 Since it comes in 3G Single SIM and 3G Smart Dual SIM flavors, you’ll want to get the latter if you can get your hands on it. That will ensure you can use two SIM cards at once to make calls, send text messages, and receive both.

All of this is powered by a 1.2 GHz quad-core processor and 1GB RAM. The device has 8GB of storage, but it’s impressively expandable via microSD card, which means up to 128GB of extra space.

The specifications are as follows (the full spec sheets are embedded below):

On the software side, the Lumia 535 is a typical Windows phone. It runs Windows Phone 8.1 with Lumia Denim (Cortana is present), and comes with the usual Microsoft software including Skype, Office editing (Word, Excel, and PowerPoint), Outlook, OneNote, and OneDrive.

Lastly, the Nokia name might be going away, but its striking colors are not. The devices will be sold in bright green, bright orange, white, dark grey, cyan, and black.