After a decade of death, Blizzard has awarded World of Warcraft’s most often killed NPC an impressive new title and, at last, a long-deserved rest.

Gamon is a cow-like Tauren who lives in the Horde faction capital of Orgrimmar. He began Warcraft as an innocent low-level citizen, and equally low-level players who chose Rogue characters in the massively multiplayer online game could get a quest to harmlessly pick his pockets for a key. 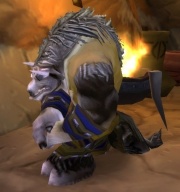 He was conveniently located, kneeling in the city’s most central inn. Unfortunately, in order for players to pickpocket him, he had to be neutral … and therefore a character players could kill. He was the only killable character in the city.

And so his hell began.

Everyone over his level — which was about everyone, since he was level 12 in a game that at the time went to level 60, and now 90 — heartlessly slaughtered him, just because they could. Higher level players logging in would kill him with a single blow. During busy times on most servers, it was nearly impossible to find him alive.

Priests would use their mind-control spell to take him over, as Gamon’s abilities included punting other players and guards a few feet or dismounting players who were riding. They’d make him dance or flap his arms like a chicken before inevitably killing him. (Horde priests are appropriately cruel.)

Players quickly discovered that once injured, Gamon would follow them almost anywhere. And so began the practice of dragging him all over the world … of Warcraft, from one end of the continents to the other.

After thousands of deaths, new life as a meme 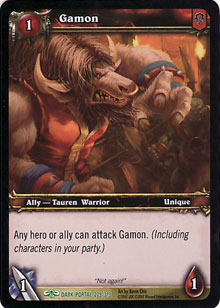 Gamon’s neutrality tempted players — he would never attack first — and his ultraconvenient location made him the ultimate kill target. Blizzard even put him in its trading card game in 2007 with the notation, “Any hero or ally can attack Gamon, including players in your party.” The card adds in small letters: Not again!

In the Wrath of the Lich King expansion, Blizzard added Death Knights to WoW. After completing the starting area for Death Knights (who were evil, but then redeemed), Horde players had to make a run through Orgrimmar to talk with then-warchief Thrall. Most guards and citizens were neutral, shouting taunts and throwing rotten fruit.

Not Gamon: He was hostile, chasing after players if they got too close, exclaiming that he would save the city. “Gamon will save us!” rapidly became a player meme.

When the Cataclysm expansion hit, Blizzard turned Gamon into a level 85 elite with a giant axe. He had achieved the highest level players could get, and had more health and could do more damage than any player.

It was a nasty surprise for players (especially new Death Knights) who hit him out of habit. At that point, players started forming large raid groups to kill him, though he still only dropped a few coins and some worthless items.

(Here’s a video of 300 people attacking him with naked level 1 orcs. You’re welcome.) 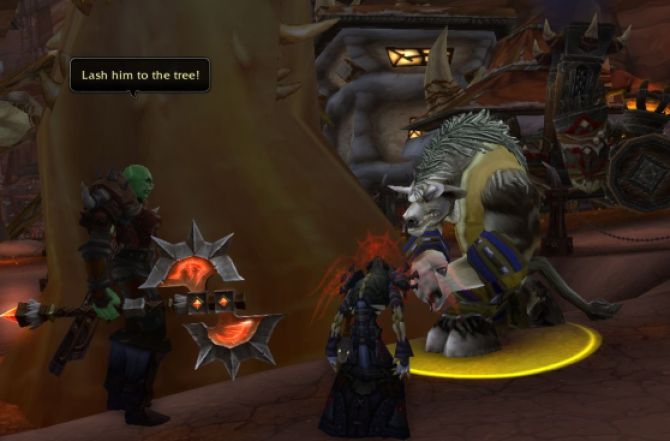 Above: Gamon makes his starring appearance in World of Warcraft’s Siege of Orgrimmar.

Gamon’s redemption began with the Mists of Pandaria expansion. He leveled up to 90 and, through each new patch, rebelled against the power-hungry Horde warchief Garrosh Hellscream, until the warchief’s soldiers eventually subdued him and tied him to a tree.

In the Siege of Orgrimmar large raid group dungeon (where both Horde and Alliance players fight against Garrosh), players can release him to attack General Nazgrim, one of the bosses.

Sadly, in nearly every iteration of that fight (or before it, if he’s released too soon), he dies. Again. WoW even has an achievement if players manage to keep him alive. One person recorded all of Gamon’s heroic dialogue from that fight, including a full 30 seconds of death sounds; you can hear it here.

But Gamon has the last laugh now.

Putting Gamon out to pasture — well, happily back in the inn, anyway 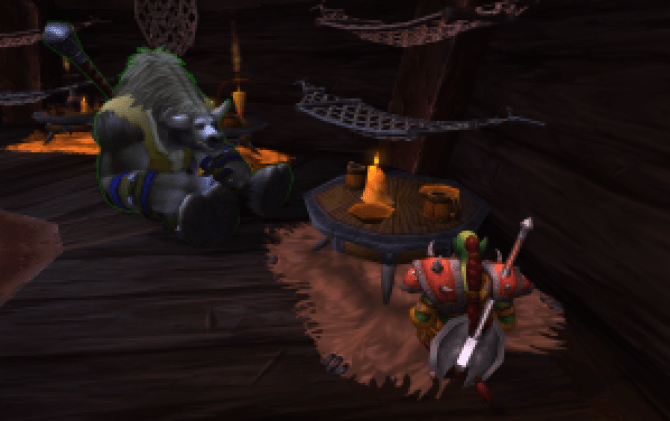 Above: Gamon and a new friend enjoy happier times.

With the latest patch in preparation for the Warlords of Draenor expansion launching this week, he is back in his inn. He sits upstairs next to a table with a full mug, sporting a new title, Hero of Orgrimmar, and a single line of dialogue: “I, Gamon, will save us!”

Most important, Blizzard made him friendly, no longer neutral, to other Horde players. Gamon, after a decade of one-sided battles, is finally unkillable.

(Gamon is getting an even more-prominent role in the new expansion. If you don’t mind a spoiler, check out this WoWhead photo.)