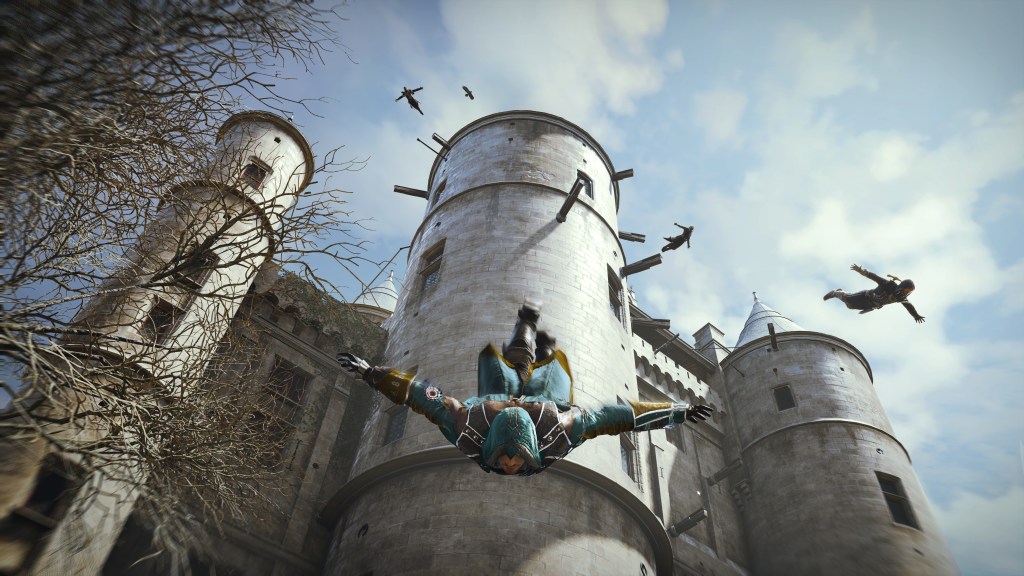 Maybe it’s a response to the criticism Unity received early on for not featuring a female protagonist, but Elise is every bit Arno’s equal. She makes it clear that she doesn’t need Arno and that she is making the choice to have him around. In the story, when you make an effort to save Elise, she gets furious with you for letting the primary villain escape to come rescue her.

It’s a refreshing and smart characterization for a woman character that you can’t actually play.

Unity locked up on me around four times throughout my playthrough. At least one time was while the game was saving, which is pretty scary. I also experienced a small number number of glitches that include the sound or music stopping suddenly or Arno getting stuck on geometry.

The big concern here is that the game will lockup while you’re saving and that will corrupt your file. That’s an important thing to take into consideration, but the rest of the bugs are not going to ruin your time with Unity.

Controls are better but still frustrating

Sometimes I yell at Assassin’s Creed. I used to think it was my fault when I would lose control of my character, but now — after playing Middle-earth: Shadow of Mordor — I know that the problem is really just Assassin’s Creed.

Ubisoft did make some improvements. You now have a dedicated stealth button, and you can do a fast-controlled descent by holding B (on Xbox One) while free-running. But that didn’t stop me from getting stuck on tables when I was trying to get from one side of a cafe to another. I still made leaps that I didn’t intend to. I still ended up with Arno stuck in weird underhangs, unable to climb any further when I was just trying to get to the top of a bridge.

This happens enough that I definitely failed some missions because of it. If my Kinect is recording everything I do and say, the NSA is gonna learn some new swear words thanks to me and Unity. 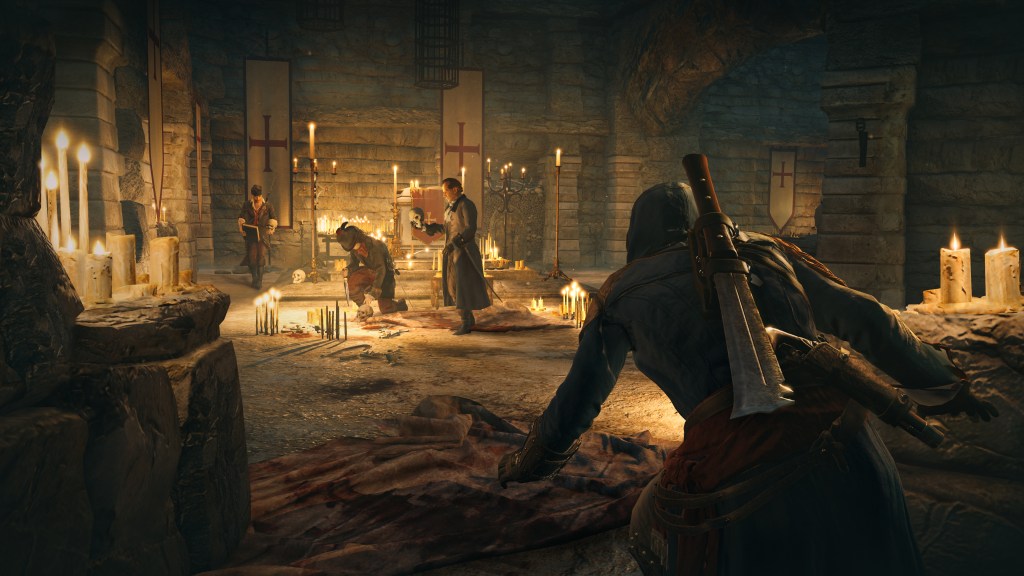 Above: The dedicated stealth and controlled-descent buttons are an improvement, but I still fought with the controls.

The world feels dead if you don’t suspend your disbelief

Open worlds are tough to judge. Things that bother me might not bother you. It occasionally drives me crazy that NPCs do not seem to give a damn what I’m doing. Yo, waitress, I just killed a man in front of you by kicking out his legs from under him and stabbing him in the face … and you’re OK with this? Sometimes crowds will react if I kill a person in the street, but the inconsistency is weird. But it’s also necessary. I can’t imagine playing this game if I couldn’t kill guards in front of people — everywhere is just so densely populated that you kinda need that freedom.

But that defeats the purpose of those huge crowds. If they aren’t behaving in a way that makes sense for actual human beings, they end up feeling just like a decoration and not people inhabiting a world.

I was not expecting to love Unity, but I do. Ubisoft nailed the big assassination missions and everything in between. I lost several days to this game, and I’m looking forward to losing a few more. I want to see if I can find all the highest-rated equipment. I want to do some more multiplayer missions. I want to solve the rest of those brilliant murder cases. I want more Unity.

Assassin’s Creed, the franchise, started in 2007 and showed us what we could expect from the PlayStation 3 and Xbox 360 for the next several years. It feels like Unity is doing something similar for PlayStation 4 and Xbox One.

Ubisoft provided GamesBeat with a digital download code for the Xbox One for the purposes of this review. Assassin’s Creed: Unity debuts for PlayStation 4, Xbox One, and PC today.