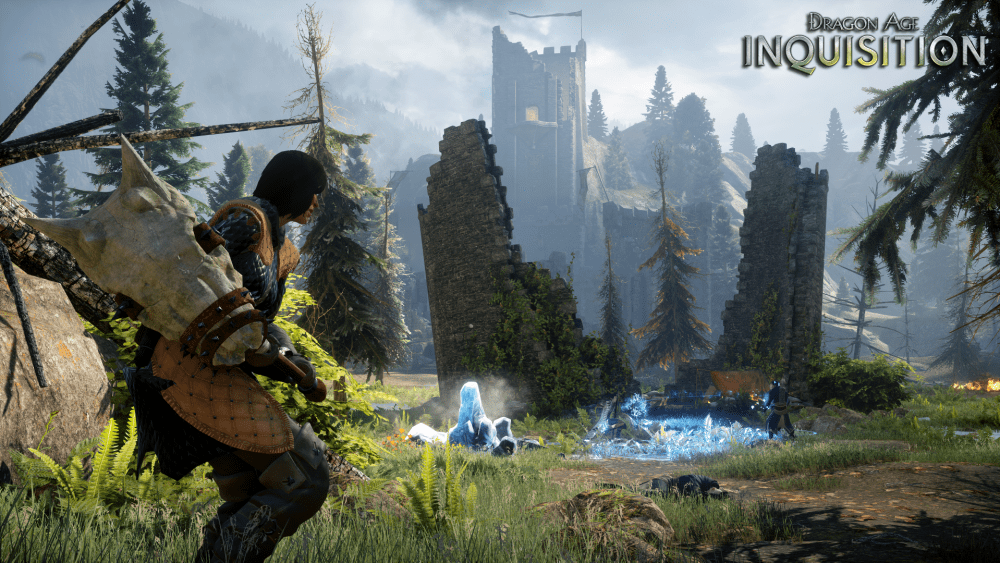 Above: Combat feels the same in hour 5 as it does in hour 50.

Fighting and talking are your main methods of progression in Dragon Age: Inquisition. And while BioWare retains its reputation for storytelling, combat doesn’t fare as well after the 20th hour. Your party splits across Rogue, Mage, and Warrior classes, each with a handful of skill trees filled with various abilities to learn. Every character also develops a distinct skill tree toward the middle, further diversifying their mid-combat options. And you can upgrade a laboratory’s worth of potions, tonics, and grenades to give out to each member of the party.

Players battle either in real-time or through a more strategic, freeze-frame approach. You can swap freely between these two tactics, as well as between each character you take into battle.  Ally A.I. works impressively without your input, using potions sparingly and almost always using the most appropriate skill for every situation. But all of these layers eventually fall away as you mindlessly sink into the combat grind.

Inquisition’s difficulty curve is a numbers game, an escalation of defensive and offensive statistics without any real deviation in behavior patterns. You encounter the same types of enemies throughout your playthrough: agile thieves, teleporting and shielded mages, and heavily armored ground-pounders. The colors on the armor may change, but the method of attack doesn’t. Demons and mythical creatures fare worse, lacking the palette swap and getting their challenge uptick from just having more of them on the screen.

No real incentive exists to deviate from whatever pattern or strategy you discover and master within the first 10 hours. Later, stronger abilities just add more power or additional effects without ever shifting the scope, scale, or nature of battle. If you are more of a real-time fighter, you can eventually button-mash your way to victory in most bouts as elemental effects just become floating words amid the chaos. Those opting for the more strategic angle will eventually menu-surf to their preferred abilities and watch Inquisition play itself.

The tears at the open-world seams 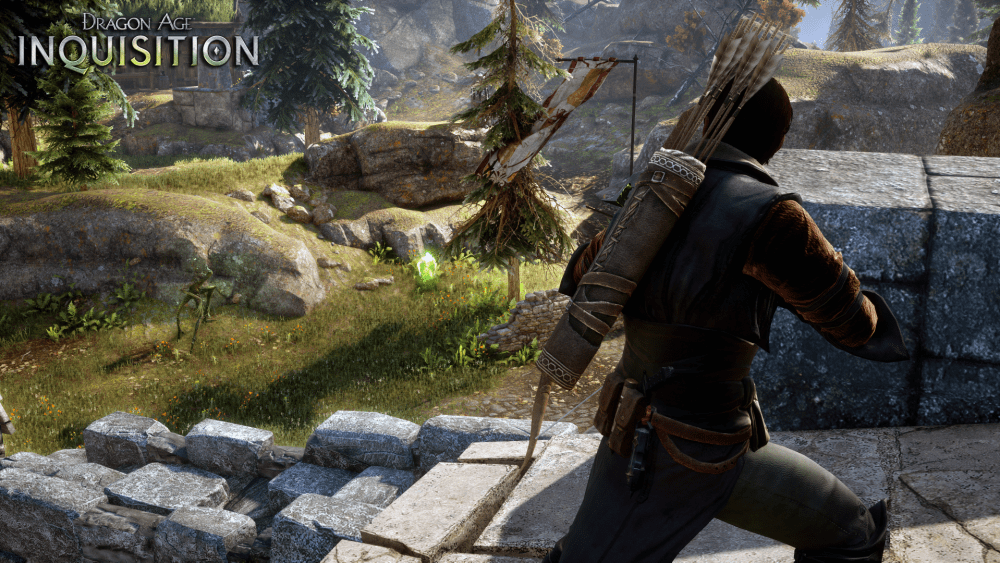 The sheer amount of content begins as a blessing but slowly grows into a curse. For one thing, the graphical hiccups associated with open-world games are out in full force in Inquisition, slow loading textures and spastic character model twitching being the most common culprits. More important, Inquisition is the type of game where most players won’t likely use, or even know the existence of, entire features and mechanics. In one 12-hour gap, I simply forgot I had a horse, because the sense of speed while mounted didn’t feel fast enough to replace running around.

Crafting is another system that you eventually won’t bother with. The most useful armor or weapon sets require too many elements or components that are so rare to make the trip out to get them worth it, and your next favorite shield for your go-to warrior is likely just in the next chest you find. Upgrading weapons is satisfying and useful, but the runes to do so with are so rare and expensive that you’ll only remember that you have the option when you get a new one as a quest reward.

While none of this affects the core gameplay, it tends to give Inquisition a bloated feeling. A lot of these periphery mechanics will play to the aesthetic taste of some players, to be sure. But enough small missed opportunities build up over time to make most players feel like something’s wrong with their play style, a reason why they aren’t making more use out of these core-feeling features.

A main plot more interested in talk than action 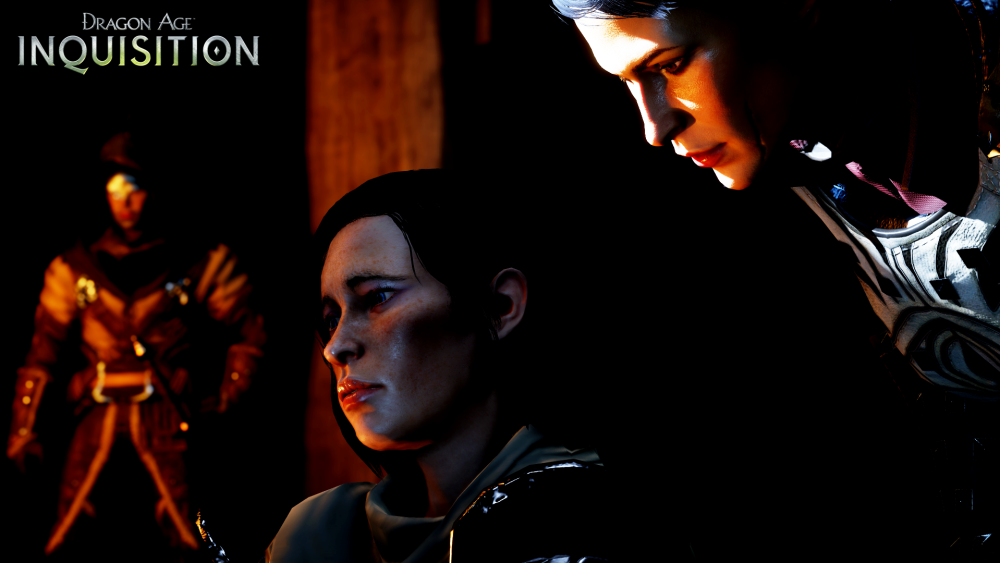 Above: Inquisition’s main story threads are more interested in making speeches about your character’s greatness than letting you prove it.

If BioWare knows how to do one plot very well, it’s of the “assemble a team to fight a very big-evil” mold. While your team is full of the expected level of stellar, well-realized characters, its mission devolves into a lot of marching and monologues of how important their fight against the Breach is. A lot of this emptiness comes from its major show/tell discrepancy.

You learn how vast and diverse the Inquisition and its army are growing through expository text boxes and off-handed conversations. In between story missions, you even see your fortress grow to include the NPC agents you’ve recruited walking around the grounds. But when it comes to picturing your big, epic battles against the impending darkness, your glorious array of forces becomes a massive squad of bland-looking squires in identical armor. Whether you sided with the Templars or the Mages, an additional squad is fighting somewhere offscreen for the Inquisition, and one NPC or another will be on hand to tell you how happy they are with the arrangement.

Some characters will drop names of characters you saved or alliances you forged in the heat of battle, but you are never given a sense that it would have been different had you chosen the other side of an argument. Aside from one of the earlier missions in the story, most of your big decisions ultimately feel like they lead to the same fight approached the same way. For most games, this would be a cosmetic issue, chalked up to the cost of cutscene rendering. But for a game built around rooting your every move back into this central, growing force, you are never given a sense of how your specific actions affected that last grand siege. It doesn’t help that the main thrust of the story plays out over only a handful of missions, amounting to a fifth of the time spent in the world for most players.

It’s a shame, because the ultimate villain of Inquisition has some serious ambitions that go beyond the goals of most fantasy baddies. The doomsday scenario it paints is genuinely motivating, sold with an almost blasphemous, cataclysmic thrill. But everyone is all too eager to just talk you through it. 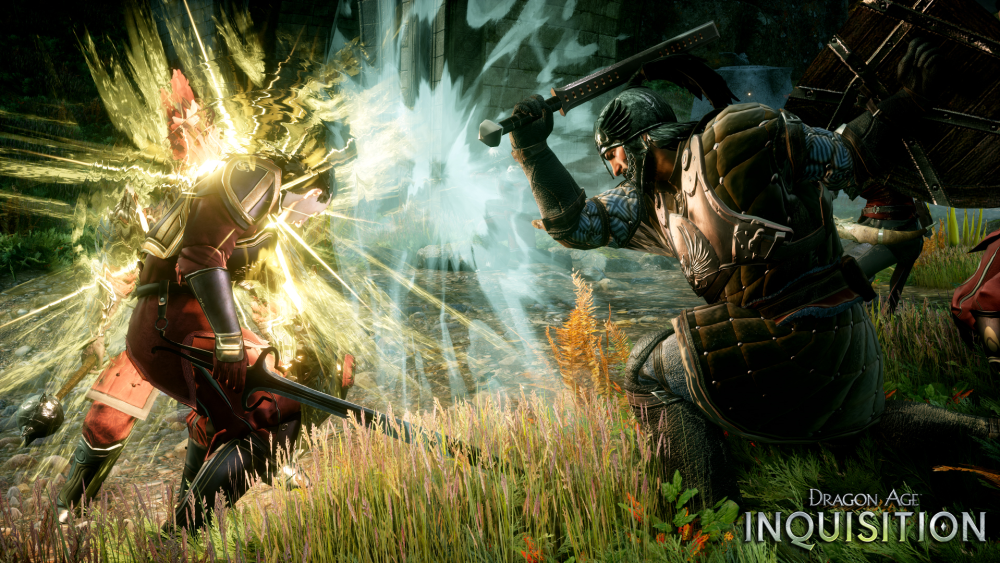 Above: Dragon Age: Inquisition suffers from a weak main story, but one hell of a central hook.

Dragon Age: Inquisition is a Schrodinger’s Goldilocks kind of a game: too big and just right at the same time.

The main campaign is more interested in telling you how great you are than letting you prove it, and combat feels designed for a game half this size. It’s not a far fall from grace, by any means, but it’s noticeable — and occasionally grating — in such a long experience. But if you have been working for the Inquisition for that long, hopefully by then you will be too busy discovering and exploring to care that much.

What BioWare has done better than most in the past is just as smooth and well-tended here. Characters are well-realized beings of desires and complications. The world of Thedas is an inviting glimpse into complicated fantasy, now with that new-generation gleam and polish. Add to that the Inquisition, a central narrative mechanic that will turn the speediest of speed-runners into an obsessive-compulsive herb picker, and the game is a worthy addition to a spectacular Western RPG franchise, only barely surpassed by Dragon Age: Origins.

Dragon Age: Inquisition releases Nov. 18 on the PlayStation 4, Xbox One, PlayStation 3, Xbox 360, and PC. The publisher provided GamesBeat with a physical PlayStation 4 copy of the game for the purposes of this review.