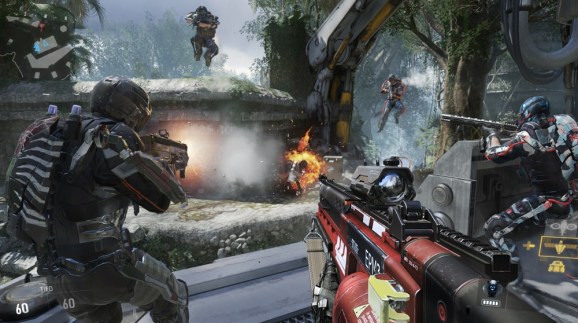 Get used to it. In the multiplayer combat of Call of Duty: Advanced Warfare, you are going to die. With its first stab at Activision’s annual franchise, Sledgehammer Games has created a lethal Darwinian jungle.

The only way to survive and win (as the war computer WOPR in the film WarGames once stated) is not to play the game. Set in the years 2051 through 2061, Advanced Warfare gives you some serious firepower and capabilities as a superhuman soldier. You can use an “exoskeleton” to boost-jump your way to the top of a building. You can punch someone across the room with a pneumatic fist.

But the weapons and gear that make you stronger also make survival harder when others use them against you. While you can do more killing in this Call of Duty, you’re also doing a lot more dying, particularly if you’re an average, older player like me. Fortunately, Advanced Warfare delivers quality multiplayer worthy of a Call of Duty game. That’s important, as 40 million people play Call of Duty every month, and multiplayer is the main reason they keep playing year round. It is a key part of why Call of Duty has sold more than 175 million copies and generated $10 billion to date.

That’s the fate I’ve resigned myself to after playing a couple of weeks of multiplayer in Advanced Warfare on the Xbox One. Yes, dear reader, I have died countless times in order to bring you this information.

I’m getting a little bit better in Advanced Warfare. I credit that in part to getting better access to more lethal weapons and accessories. I have, for instance, a laser sight on my submachine gun that I can use to target enemies while firing from the hip. 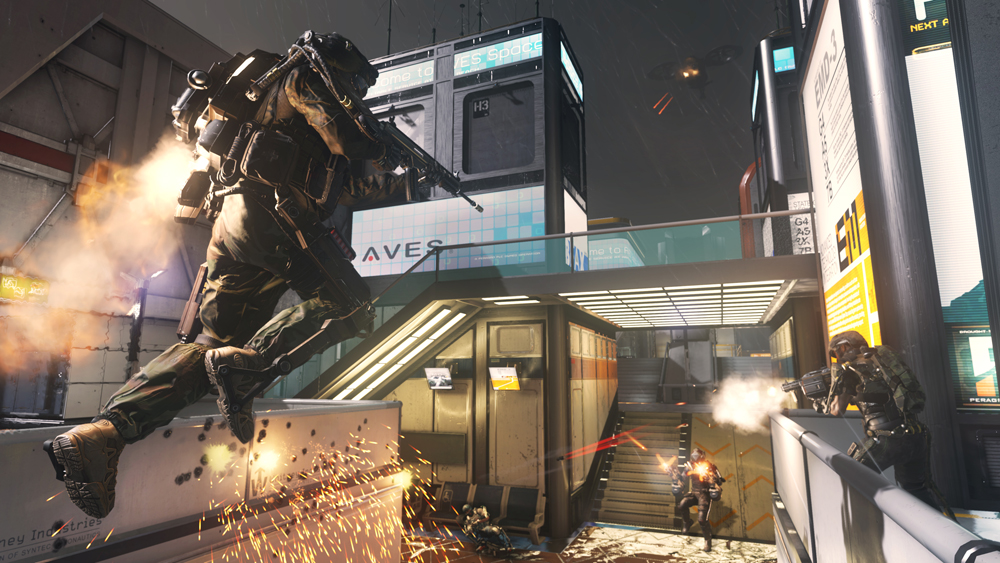 Above: Exoskeletons change the landscape of multiplayer combat in Call of Duty: Advanced Warfare.

If you haven’t learned the basics, Advanced Warfare has a place for “noobs,” or new players. The Combat Readiness Program is a new multiplayer mode that makes noobs feel good about themselves and slowly gets them acquainted with regular multiplayer. Like one of this year’s other sci-fi shooters, Titanfall, the CRP mixes artificial intelligence bots with real noob players in the same matches.

After I played the Combat Readiness Program and logged more hours in the regular multiplayer, my kill/death ratio rose from 0.34 to 0.42. That’s quite an improvement.

In this mode, you play anonymously. You have no voice chat, so people can’t put you down. When the round starts, you may choose a preassembled weapons kit that is tuned for a particular kind of player — like sniper, heavy weaponry, balanced, or “run and gun,” where you hustle along with a submachine gun shooting at everything.

In normal play, you can customize your kit, or class, so that everything is just right. But as a new player, you can easily mess up your selections. If you play a run-and-gun style with a submachine gun, you should also have the perk that makes you run faster. The developers have preselected features that fit well together in the Combat Readiness Program.

If you get a certain number of kills in a row, you get prizes like a remote turret or recon drone in regular multiplayer. But most noobs never last long enough to get a string of kills, so they don’t get to learn how to use most of these Scorestreak prizes. 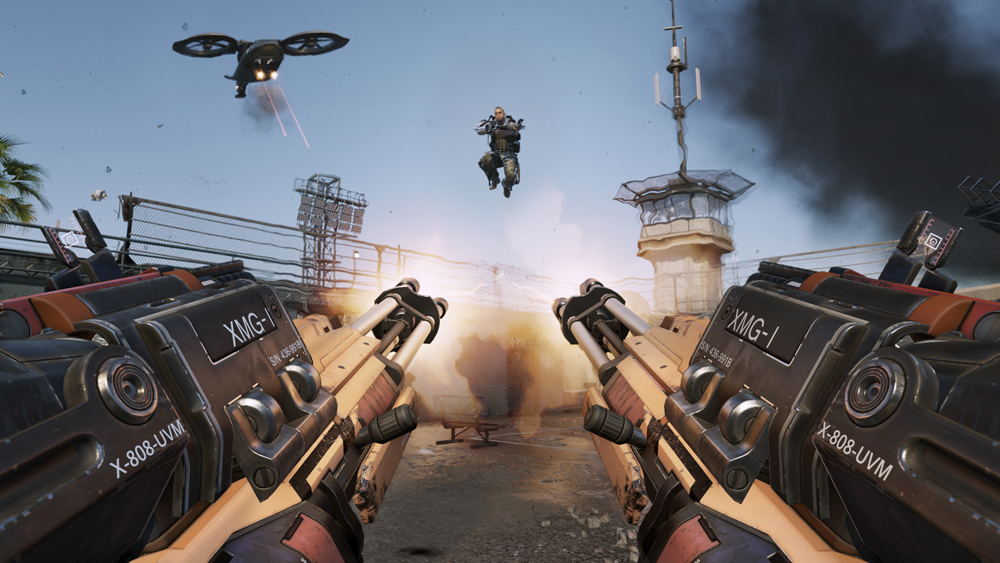 Above: Accuracy by volume with Call of Duty: Advanced Warfare’s akimbo machine guns.

The armored, high-tech exoskeleton you wear is what gives you superhuman power. You can vault up walls, scale buildings, and hang in mid-air. You can dodge enemy attacks. Melee strikes are also quite powerful. You can launch one against an opponent and send them flying against the wall. You can even use the Exo boost to land on top of an enemy from above.

You can also use your Exo suit to give you special abilities such as a shield, extra health, or the ability to hover. But the great thing about the suit is that it doesn’t slow you down. You’re still playing at 60 frames per second, and you can move fast in your suit. 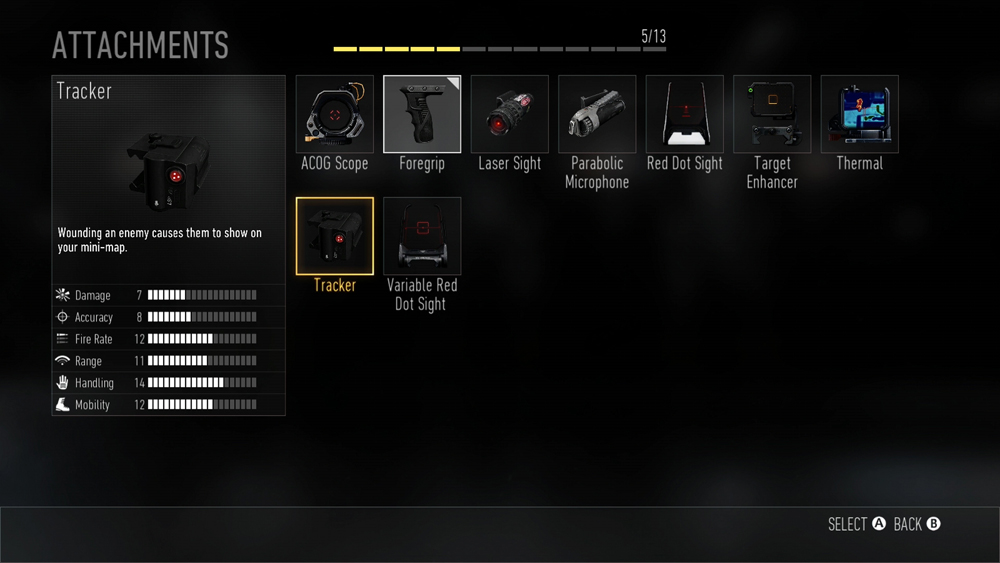 Perhaps the greatest creation by Sledgehammer’s developers is the “threat grenade.” When you toss it, it sends out infrared signals in all directions and maps images of all of the enemies in the area, including those who are hiding behind walls or barriers. If you have a powerful enough weapon, you can shoot right through those walls.

This helps get rid of “campers,” or the cowardly players who stay in one spot, like behind a door, and kill whoever runs by. Campers are very unsportsmanlike.

I liked trying out the different scopes. The Laser Sight works well with a submachine gun as it helps you aim when you fire from the hip. The Thermal scope uses a heat map to show you the red-hot outlines of enemies, but it can be slow. The Target Enhancer scope has a built-in threat detector, which means it will highlight an enemy in red when you are looking down the scope in a given direction. It will even see that enemy through walls, much like the threat grenades do. 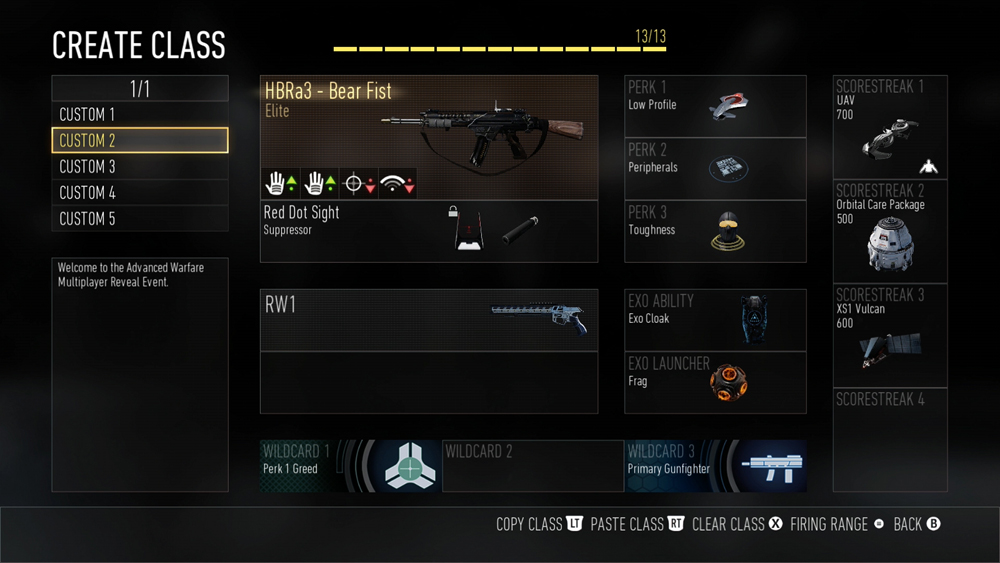 Above: Call of Duty: Advanced Warfare features the Pick 13 system.

Previous games used a “Pick 10” resource system that enabled you to choose 10 different things to throw into your soldier’s combat loadout. Some of these items were expensive, like your primary weapon, and could cost a lot. So you could only load up so much gear. With Advanced Warfare, that system has now become “Pick 13.” With the extra points, it’s not so hard to carry two primary weapons.

For Perks, or special abilities that cost one point each, I use Lightweight to make my soldier run faster. I use Peripherals to increase the size of the absurdly small minimap. And I use a Blast Suppressor to hide my Exo jumps from enemy minimaps. For my special Exo ability, I use the Exo Cloak, which makes me invisible for a few seconds.

That’s about all I need to go into battle. If I’m going to run-and-gun, I use the submachine gun. If I have to take long shots, I pull out the rifle.

In between the matches, you receive new Supply Drops, which let you customize the look of your character or try out a new weapon. The options for weapons are in the hundreds. And as for clothing, there are also lots of options for things like kneepads or gloves.