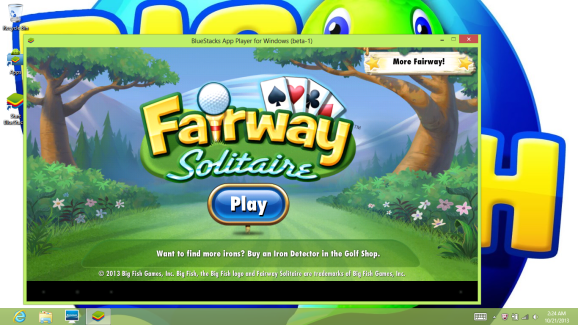 Image Credit: Big Fish
Nearly $900 million can buy a lot of mint juleps.
Churchill Downs, the racetrack giant that hosts the Kentucky Derby, has acquired casual game publisher Big Fish Games for $885 million — a major move in a mobile gaming market that’s approaching $20 billion by the end of this year.
This is one of several big deals this year that highlight the growing attraction of big companies for digital game companies in the mobile or online sectors. Social casino games have become a $2.7 billion worldwide industry in a short few years thanks to rapid growth on Facebook and mobile, according to Eilers Research. This has prompted a lot of merger-and-acquisition deals as well as the creation of dozens of startups. And for Big Fish Games, the fifth-largest maker of social casino games, these kinds of games generated $36 million in revenues in the last three months.
Seattle-based Big Fish also has some other key games. Fairway Solitarie blends cards and golf and has millions of fan. It’s the top-grossing solitaire game in the App Store. Year over year, it doubled its revenue in Apple’s store. It was originally a premium game and was adapted to free-to-play, and now it’s a full-fledged game service on smartphones and tablets. Big Fish supports it by launching a new course every day and maintaining live events.
“We are extremely proud of the company we have built over the last twelve years,” said Big Fish Games founder and CEO Paul Thelen in a statement. “Churchill Downs is a company with a commitment to interactive entertainment and a track record of growth and performance. We believe Big Fish is now positioned to become an even greater force in the casual, mid-core and social casino mobile and online games industry. Churchill Downs is a great cultural fit for us and we are thrilled to be joining the Churchill Downs family.”
Churchill Downs, which is publicly traded on Nasdaq, may host the biggest horse race in America, but it has been active in the game business for a while, creating digital games for real-money gambling. It was no doubt drawn to Big Fish Casino, one of the hottest mobile social casino games on mobile devices.
Big Fish recently added a new chief financial officer, a move that to some foreshadowed this deal.Louisville, Ky.-based Churchill Downs will pay a base of $485 million, with a potential earn-out payment of $350 million in 2015 if certain targets are met. Thelen also gets a potential bonus payment of $50 million based on 2016 bookings, if he hits his targets. The purchase pricewill be paid in cash, except for about $15 million in Churchill Downs stock to be paid to Thelen.The upfront payment is 8.5 times Big Fish’s adjusted earnings before income tax, depreciation, and amortization of $57.3 million for the past 12 months ended Sept. 30.
“The acquisition of Big Fish and our entry into the rapidly growing mobile and online games industry gives us new products, new customers, new geographies and new sizeable growth
opportunities,” said Bill Carstanjen, Chief Executive Officer of Churchill Downs, in a statement. “While many will view this transaction as a logical extension to what we currently do with Twinspires.com, what is most important to us are the strong team and the processes and capabilities that have been built by Big Fish in Seattle, Oakland, and Luxembourg. We are excited to announce this transaction and believe we will do great things together.”
Goldman Sachs is acting as financial advisor and Sidley Austin is acting as legal advisor to Churchill Downs. JPMorgan is acting as lead on the financing of this transaction. Qatalyst Partners LP is acting as financial advisor and Perkins Coie is acting as legal advisor to Big Fish on this transaction.