You’re not going to sneak up on anybody with a Nexus 6 in your hand.

The latest smartphone from Google stands out for a few things, but its gigantic 5.96-inch screen leads the list. And for some users, it may also end the discussion: It makes the Nexus 6 — $649 direct, at varying prices from the four national carriers — awkward to use without delivering enough in return.

It’s not that you can’t stash the Motorola-built 6 in a pants pocket (at least if we’re talking dad jeans) or a shirt pocket (although the way it protrudes by over an inch makes it the pocket protector of phones). But working this thing with one hand — a common use case in grocery stores, airports, trains, buses, bars, and other locations the 6’s designers apparently don’t frequent — requires awkward, uncomfortable contortions.

I had to roll and pitch the phone in my hand to get my thumb to reach icons and onscreen keys along its far side, and I kept worrying that this back-and-forth would launch the thing towards the sidewalk.

And where other enormophone vendors have customized Google’s operating system to exploit that expanded screen real estate, the Nexus 6 sticks to stock Android 5.0 Lollipop. For once, that’s not a virtue in a Nexus device.

There’s no added row of numbers in the onscreen keyboard or any windowing option to let you view more than one app at once. Even Google’s widgets don’t fit: While the Nexus 6’s screen has a five-column layout, almost none span more than four columns.

And because Google elected to follow the pointless practice of other manufacturers of packing in more pixels than the unaided human eye can distinguish — its 2,560-by-1,440 resolution yields a ludicrous 493 pixels per inch — that bright, vibrant AMOLED display doesn’t actually show that much more content by default.

For example, my Nexus 4’s 4.7-in. screen displays 20 lines of a VentureBeat story; the Nexus 6 may have 3.75 times the pixel count and 50 percent more screen area, but it only shows another four lines of that piece.

(To opt out of a large-type version of Android, jump into the Settings app’s Display category and change the font size from “regular to “small.”) 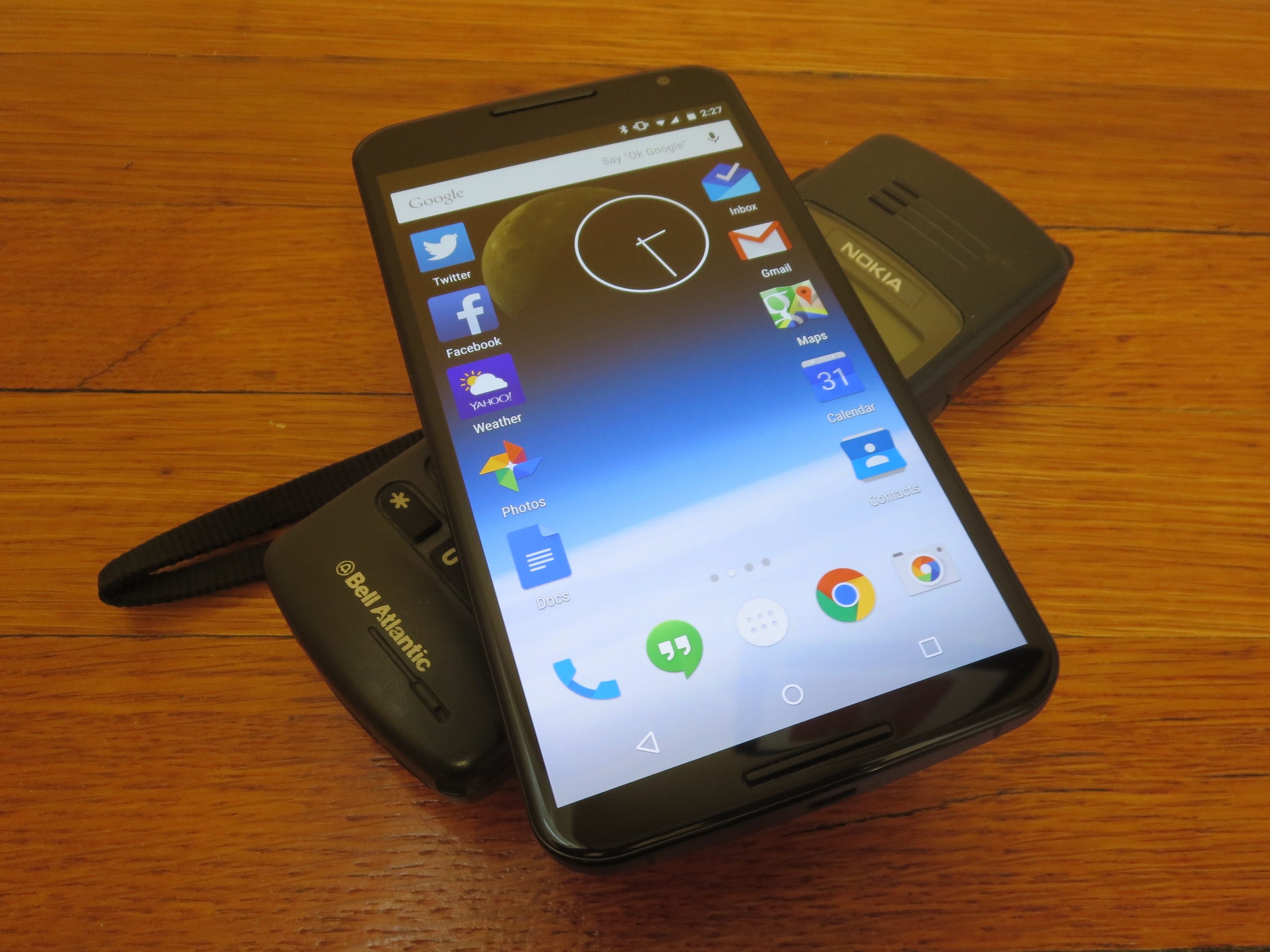 The Nexus 6’s expansive outlines accommodate a 3220 mAh battery that permitted me to forget to plug in the phone at night without waking to a dying phone. But in active use, with the screen kept on and Pandora Web radio playing continuously over a T-Mobile LTE connection, the 6 lasted a much less impressive 7 hours and 48 minutes.

The included AC adapter’s turbo-charge feature breathed 20 percent of life into the phone in 30 minutes, but that blocky brick also makes the iPad’s charger seem small. Using a generic micro-USB cable and charger slowed down things by about a third.

I can’t complain about call quality — I was downright impressed by how well the noise cancellation muted the screech of a BART train headed into San Francisco. But voice-over-LTE calling (and, at T-Mobile, Wi-Fi calling) awaits a software update.

The optical image stabilization of the 13-megapixel camera on the back does a bit to repair the reputation Nexus phones have for poor image quality, but Google’s camera app still botched a couple of exposures and exhibited notable shutter lag. (See my Flickr album of sample shots.) And pictures of fidgety toddlers — always the hardest use case for phone photos — still tend to come out blurred. 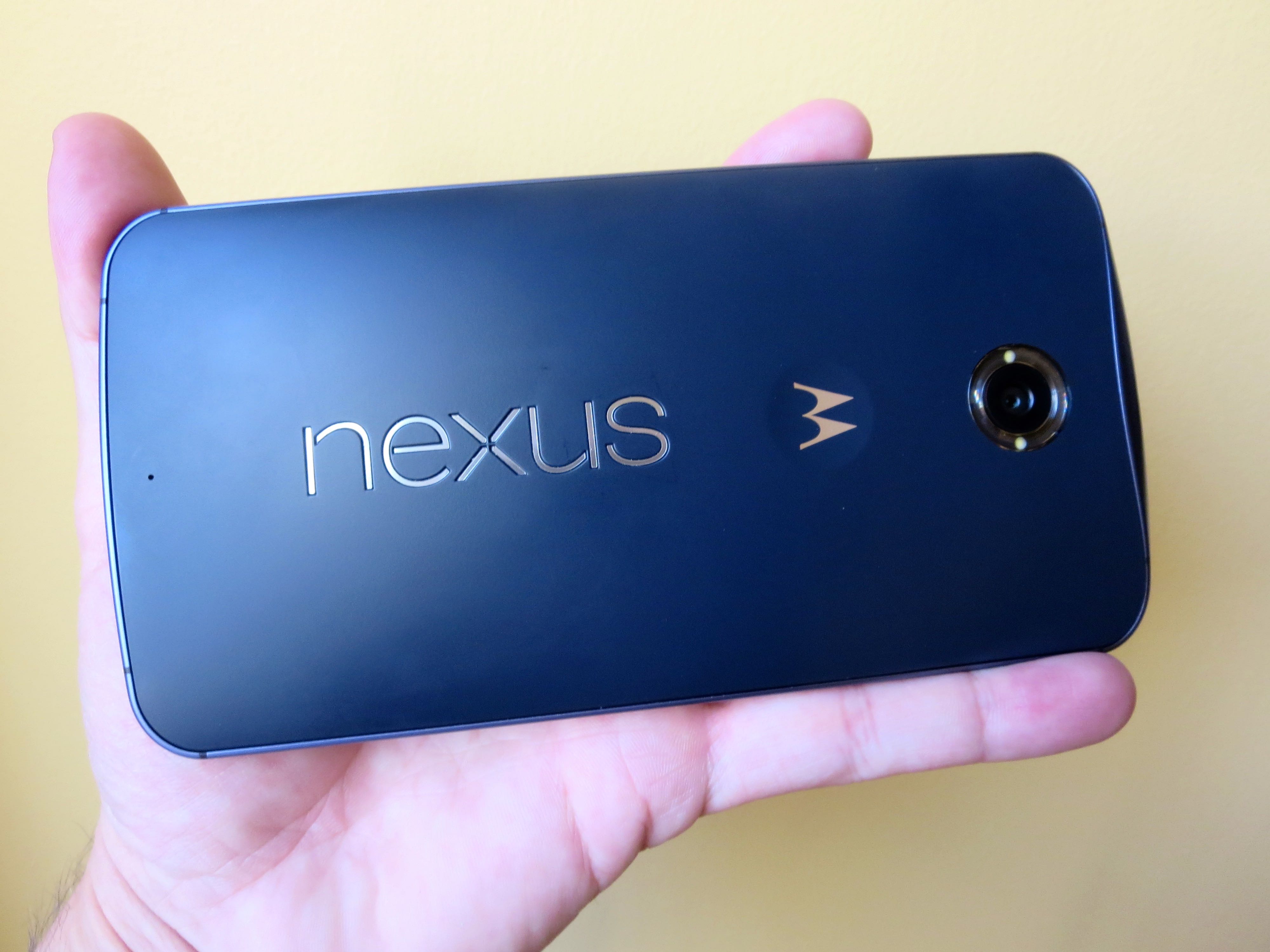 As with other Android phones, you get the added benefit of being able to create a “photo sphere” interactive 3-D panorama.

The 2-megapixel front camera was more liable to confuse exposures than the back camera. It records 1080p video; the back defaults to that but can also record 4K video, should you want to blow your plan’s data cap that much faster.

The Nexus 6 does easily outclass Apple’s almost-as-bulky iPhone 6 Plus, not to mention Google’s own Nexus 9 tablet, in shipping with 32 gigabytes of storage instead of 16. But without a microSD slot, you can’t augment that capacity after purchase.

If carrier choice has held you back from a Nexus purchase, the 6 also improves on its predecessors: Verizon will sell it, which hasn’t happened with a Nexus phone since 2011’s Galaxy Nexus. We can only hope that Verizon will ship Google’s updates faster than it did three years ago.

Verizon has yet to announce pricing as of Tuesday night, AT&T will offer it for $249.99 on contract or $682.99 unlocked, Sprint has only revealed a $696 “Easy Pay” unsubsidized price, and T-Mobile will sell it for $649.92 a week after everybody else.

Buying the Nexus 6 at $649 unlocked from Google, once it’s back in stock, will save money, maximize your flexibility, and minimize what should already be a short wait for Android updates. But even if that price beats the going rate at carriers, it’s still a lot higher than any other Nexus phone — yet another departure from Nexus norms that has me worried.