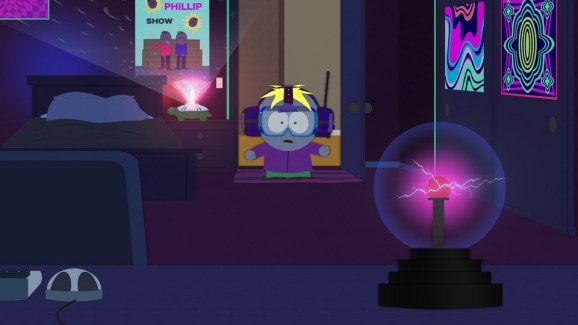 Tonight’s episode of the animated show South Park, dubbed “Grounded Vindaloop,” follows the adventures of Butters — the show’s regular whipping boy — as he loses his grasp on reality due to spending too much time in the Oculus Rift. Naturally, that leads to him getting stabbed in an alley by a prostitute.

Check out a clip from the episode:

We’re still likely months away from a consumer Oculus Rift, but that’s not stopping anyone from getting excited about it. And it’s public appearances like this that could generate serious buzz in the lead up to launch.

While South Park creators Matt Stone and Trey Parker are very tapped into the gaming scene (as evidenced by their many episodes that touch on the subject), they speak to a much wider group of people. Tonight’s episode could help get a mainstream audience curious about the potential of virtual reality.

You can catch the full Oculus Rift episode of South Park by checking the show’s website. It should be online tomorrow.