The biggest stars at this year’s BlizzCon event had nothing to do with space aliens or the denizens of Azeroth. A bespectacled gorilla with a lightning gun and a cheery, time-traveling English soldier stole the show.

At its annual fan convention, developer Blizzard Entertainment announced Overwatch, its first new game in 17 years that isn’t a part of its Warcraft, StarCraft, or Diablo franchises. Overwatch is a team-based multiplayer shooter for PC that has a variety of superpowered characters to choose from (12 heroes were available to play at BlizzCon, and Blizzard promised it’s working on adding several more). The company wasn’t ready to talk about how it’s going to sell Overwatch just yet, but it did say a beta is coming in 2015.

I was at BlizzCon all weekend long and spent as much time as I could (10 multiplayer rounds, to be exact) with Overwatch. Even in my post-convention haze — my back hurts from carrying my laptop, and my hearing hasn’t been the same since the Metallica concert — I’m still thinking about this game a lot. Here are a few things I learned from playing. 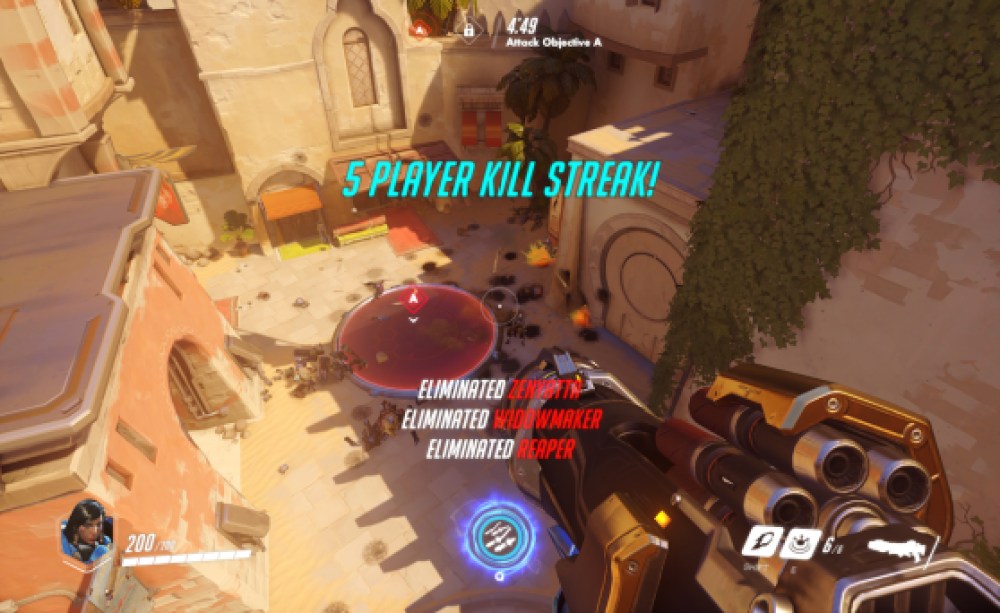 Above: Pharah is great at dispersing crowds with her rocket launcher.

Blizzard is mostly known for its expertise in the real-time strategy, role-playing, and massively multiplayer online genres, so its take on FPS games is fascinating in and of itself. And this shooter moves pretty damn fast. You can take down most of the heroes with just a few shots, and when you die, it doesn’t take long for Overwatch to pull you back into the fight. Death also gives you the opportunity to change into another hero if you didn’t like your last choice.

Overwatch does require a bit of multitasking because movement (more on that later) is quite different from other multiplayer games, and it took some time for me to wrap my head around the heroes’ special abilities. The 6-on-6 battles can get chaotic, but once I knew what I was doing, I couldn’t wait to jump into another match and experiment with the other characters.

Shooters don’t always have to be so violent

I’m so used to violent multiplayer games that it took me a while to realize that Overwatch’s use of blood is very minimal. At first, I thought that it had none since I didn’t notice it in my play sessions (I realized I was wrong after looking at some gameplay footage again). You do see some blood splatter here and there, but it’s a cartoonish kind of violence, so it’s not like heads and limbs are falling off players’ bodies.

This fits well with the game’s uplifting tone. At Overwatch’s inaugural BlizzCon panel, the developers said they wanted to build a world that was worth fighting for, a place that players wanted to come back to again and again. So instead of seeing war-torn battlefields, you’ll find maps that are beautiful renditions of familiar real-world locales filtered through Overwatch’s version of the future. Some of the characters also reflect this upbeat attitude in their dialogue: Mercy, a healer who can fly for a brief period of time, even says “Heroes never die!” while in battle.

You’re still killing each other, so the game isn’t about holding hands and making friends with your enemies. But seeing such positivity in a shooter is refreshing and most importantly, still a lot of fun. The level of gore could change over the course of Overwatch’s development, but I have a feeling Blizzard is going to keep the buckets of blood away from this one.

It breaks the 2014 jetpack trend

This year’s crop of triple-A multiplayer games — Titanfall, Destiny, and Call of Duty: Advanced Warfare — all have one thing in common: jetpacks (or some variation of it). They allow players to make huge leaps or double-jump to the top floors of a building to avoid gunfire. Apparently, Overwatch didn’t get the memo. It doesn’t even have a “sprint” button, so unless your character has a fancy ability to make up for it (teleportation, flight, wall-climbing, grappling hooks, etc.), they have to move the old-fashioned way.

It’s not necessarily a bad thing, but it is different and makes your hero choices more meaningful. In general, the most agile characters are also the weakest when it comes to health. 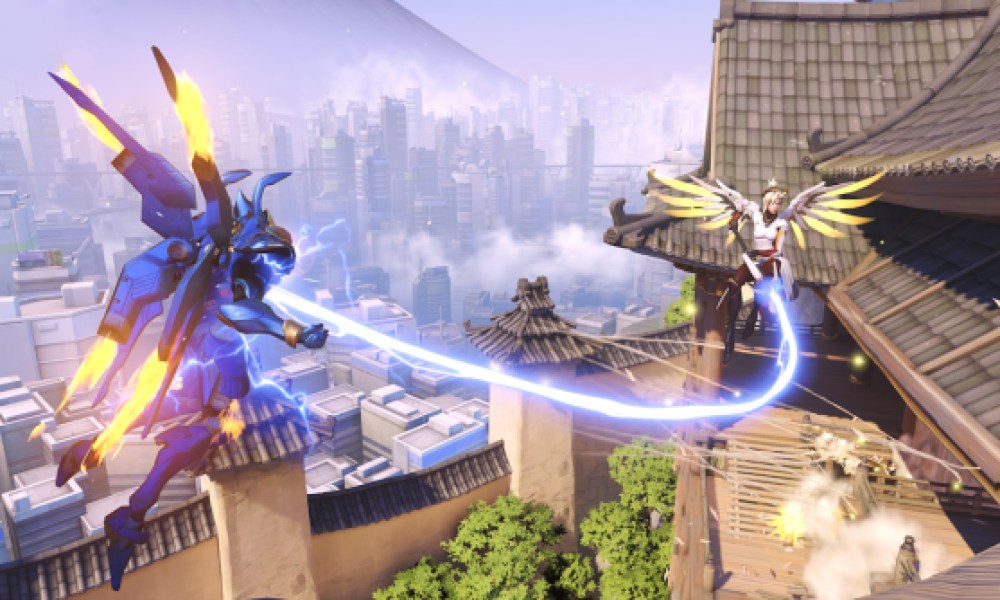 Above: Mercy (right) is one of the medics in Overwatch’s roster.

A functioning team is the key to winning in a lot of multiplayer games, but because Overwatch’s heroes fall into such rigid classes (offense, defense, tanks, and support), teamwork is especially vital here. Being on a good team can lead to quick and decisive victories, so recognizing the strengths and weaknesses of your hero goes a long way. For example, I wasn’t helping anyone when I kept running into the front lines as Symmetra, a support character with a small amount of health. Her play style requires a lot of patience, and I should’ve let my teammates clear a path before going in.

A few heroes feel too fragile

I understand why the support class is a little vulnerable, but I found it strange that offensive characters also don’t have much health. I first noticed this when I played as Hanzo. The Japanese archer kind of acts like a sniper, so you have to pick your targets (and sniping spots) carefully. Like a dummy, I stayed in the open while I experimented with Hanzo’s attacks, and I was a little annoyed when I found out he can die rather quickly.

I hope Hanzo and others get a health boost at some point. In the demo, the only way to attack players without worrying too much about your health was with damage-absorbing tanks like Reinhardt (the big knight) and Winston (the gorilla). 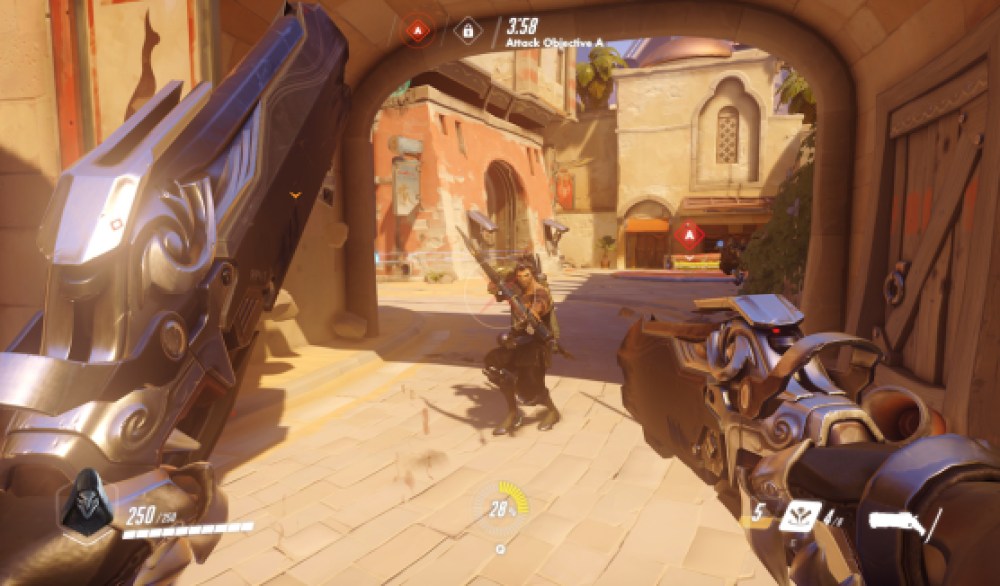 Above: Yeah, Hanzo is not going to survive this encounter.

The biggest problem I had with the demo is how two of the maps (the Egyptian-themed Temple of Anubis and Hanzo’s hometown of Hanamura) lock their objectives (capturing territory) behind artificial chokepoints. The attacking team has no choice but to funnel through these small areas and try to withstand the wrath of the defenders. In both maps, the defending team spawns right near the last objective.

The final showdown in Anubis is tricky when you’re on offense. You either have to go through the front entrance of a temple or try to flank your opponents from a small passageway on the side. Either way, it’s easy for your enemies to spot you (especially if they place turrets in there) and light you up. Hanamura has a few more attacking options in its two-story building, but I found it equally frustrating.

You can get some amazing kills

On the bright side, you can score some awesome kills with your hero’s powers. During a battle on Anubis, a player was chasing me down a narrow street. I was attacking him with Tracer and kept backpedaling away. The important thing to know about Tracer is that her Recall ability allows you to time-travel: It takes you back to where you were three seconds ago, resetting your health bar to whatever it was back then. Before this match, I mostly used it to retreat if I was in danger. 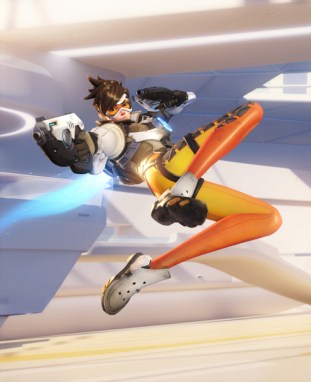 Above: Tracer’s pistols are like shotguns: They’re most effective at close range.

That was my intention in this case as well, but something even better happened: I ended up right behind the guy, and took care of him before he could turn around. In retrospect, it makes sense. We were fighting in a relatively straight line for a couple of seconds, so of course Recall would drop me behind him. But in that moment, I wasn’t thinking of that at all. And I felt like a badass for pulling it off.

Tracer is the perfect mascot

Tracer also seems like the official mascot of Overwatch. She’s the hero that Blizzard talked about the most during the game’s unveiling, and in one of the BlizzCon 2014 logos, she was posing next to well-known figures from StarCraft, Warcraft, and Diablo. It’s not hard to see why after playing. Her time-traveling skills are one of the more visually impressive abilities in the game (it feels fantastic when you chain them together), and her positive, perky attitude just makes her a likable character.

You can see a glimpse of her charm in the gameplay trailer below.