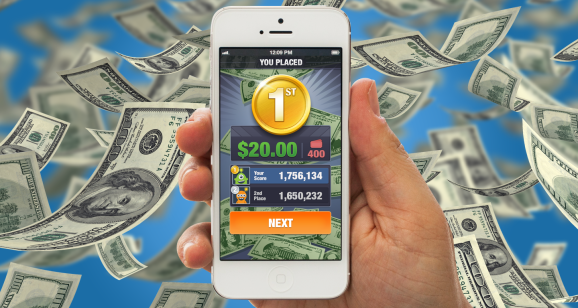 Skillz now provides gamers with a way to livestream their action in addition to real-money competitions.

Competitive gaming on mobile isn’t all about huge events that fill Madison Square Garden. Many players are playing and winning real cash by playing from their own home.

E-sports company Skillz revealed today that it has paid out more than $2 million to its players since the start of the year. Skillz lets people compete in cash tournaments live on their smartphone. It hosts more than 100,000 tournaments every day across a number of different mobile games, like endless platformer Survival Run with Bear Grylls. While Skillz is boasting about the money, it is also highlighting the diversity of its audience. The company claims that “nearly half” of its players are women.

“Our mantra, ‘E-sports for everyone,’ is not just lip service,” Skillz chief executive officer Andrew Paradise said. “We are so proud to have built such a diverse and active community of competitors. Competition is fun for everyone, no matter what the sport. There’s no reason that eSports have to be some sort of boy’s club, and we’re happy to lead the charge in creating a more inclusive industry.”

Skillz also shared some other data about its players:

Competitive gaming is a growing part of the industry. Hundreds of thousands of people tune in to watch the championship events for games like Hearthstone, Dota 2, and League of Legends. While those games attract a huge, dedicated, hardcore audience, Skillz is trying to make a space for everyone else.

Making e-sports for everyone else is starting to pay off. The company generates cash by taking a small percentage from each match. As its audience grows and makes more money, so does Skillz.