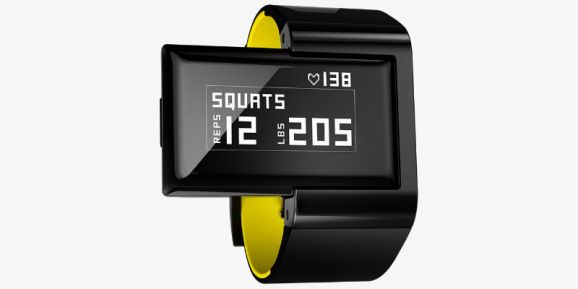 Fitness trackers abound, and though there is a big market for them, wearables companies are looking for ways to stand out from the crowd.

Atlas Wearables has designed a fitness wristband that closely monitors the wearer’s form when doing things like pushups, curls, and squats. It compares the user’s form against a library of “ideal” motions for a variety of exercises and suggests improvements.

The Austin, Texas-based company has just closed a $1.5 million funding round led by Houston-based JRG Capital. In all, 15 individual investors contributed to the round, including Mark Rampol, CEO of the Zico brand of coconut water. Atlas raised $630,000 in an Indiegogo campaign earlier this year.

Atlas Wearables CEO Peter Li told VentureBeat that the company’s wearable, the Atlas Wristband, uses a 3-axis accelerometer and a 3-axis gyroscope to track the movements of the user. It sports an OLED touchscreen with capacitive touch.

The device also counts steps, reps, and other basic stats. It’s waterproof to 50 meters. The battery lasts about three days, and, unlike many wearables, the Atlas Wristband uses a standard mini USB cable for charging.

Li is 25 and has a Master’s degree in biomedical engineering from Johns Hopkins University, with a focus on tissue engineering.

He says the Atlas Wristband will go on sale this winter for $249.