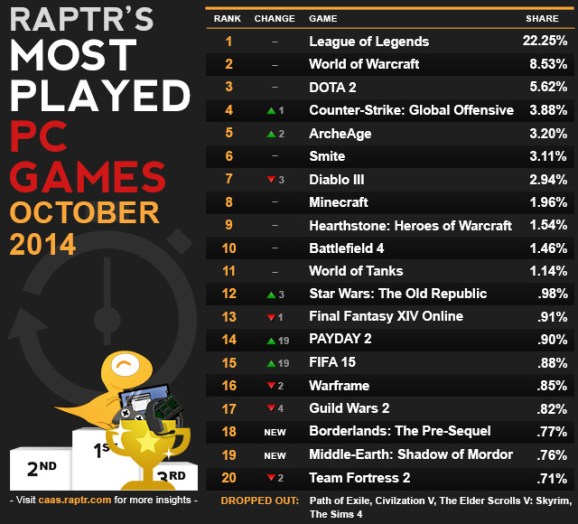 These Raptr online game usage stats are getting boring. Every month, Riot Games’ League of Legends comes out on top as the most-played game of the month. October was no different, with League of Legends commanding 22.25 percent share of the total playtime, according to gamer social network Raptr. 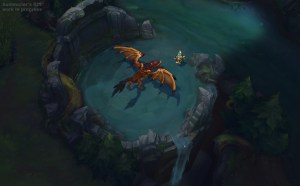 This fast-paced fantasy-themed multiplayer online battle arena (MOBA) game, has held the spot for months. As a free-to-play game, LoL is enormously popular around the globe. It runs on a lot of PCs, as its system requirements aren’t that high. And Riot Games has been steadily feeding new content to the fans, many of whom play it competitively in e-sports tournaments. Last month, its play percentage was 22.54 percent.

Playtime for League of Legends was up 2.78 percent in October, compared to September.

Blizzard Entertainment’s massively multiplayer online role-playing game World of Warcraft came in second at 8.53 percent, followed by Valve’s Dota 2 (a MOBA as well) at 5.62 percent, Valve’s Counter-Strike: Global Offensive at 3.88 percent, and ArcheAge (another MMO) at 3.2 percent. Still, League of Legends has a bigger share of playtime than the next five games put together.

FIFA 15, Borderlands: The Pre-Sequel (17th), and Middle-Earth: Shadow of Mordor made their first appearance in list this month. Overall gameplay time was up 4 percent. Blizzard’s Diablo III slipped from No. 5 to No. 7.

World of Warcraft, the decade-old massively multiplayer online role-playing game,  got a boost thanks to the release of The Iron Tide patch, which introduced new character models, world events, revamped group finders, and more. Players likely came back as well to prep for today’s launch of the Warlords of Draenor expansion.

Star Wars: The Old Republic rose three spots thanks in part to pre-order bonuses for the upcoming expansion, Shadow of Revan. Payday 2, the bank heist game of cops-and-robbers,  also returned to the top 20, jumping 19 spots to No. 14. A John Wick movie promotion helped as you got to play as Keanu Reeves’ character.