This War of Mine stands battlefield games on their heads. What happens, it asks, to the people who have to scrape out a living in the middle of a war?

The result is a dark, somber, and seductive game, a sort of Sim Slums that asks you to look out for a little crew of refugees as best you can.

This War of Mine debuts today for PC (reviewed here), Mac, and Linux on Steam and GamesRepublic for $20 from Poland’s 11 Bit Studios. 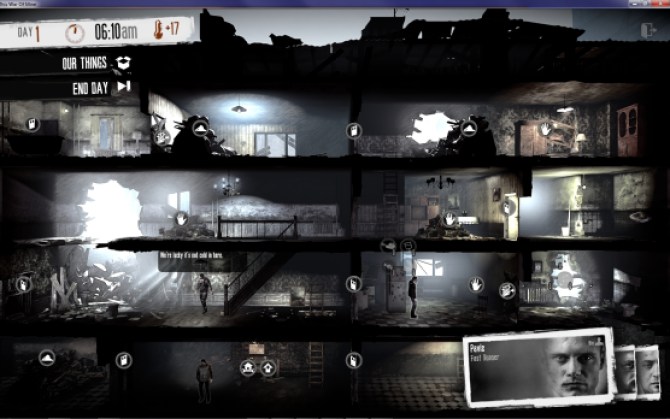 Above: Your home base: the ruined, multilevel building where your survivors spend their days.

The day/night cycle of survivors

This War of Mine has two phases: day and night. You start with three civilians, each with different skills. During the day, your crew will hole up in your ruined multilevel house, resting, healing, making tools or food depending on the supplies you’ve gathered. You might receive visits from people looking to trade, but generally, you spend the time tinkering, crafting, and managing your survivors’ needs.

At night, most rest or stand guard, while one you select goes hunting for salvage at locations you choose. They might sort through an abandoned building that offers little risk (but little reward, as others have picked it nearly clean) or through occupied houses or buildings that offer more challenges.

You can sneak around and avoid people — or you can fight them for what you need. Just be aware that, as in real life, decisions you make do have consequences, especially on those who carry them out. You can easily make your characters depressed enough to commit suicide.

The daily cycle, with its sim-and-crafting by day, stealth-and-salvage by night, gives the game wonderful variety within the same play session. 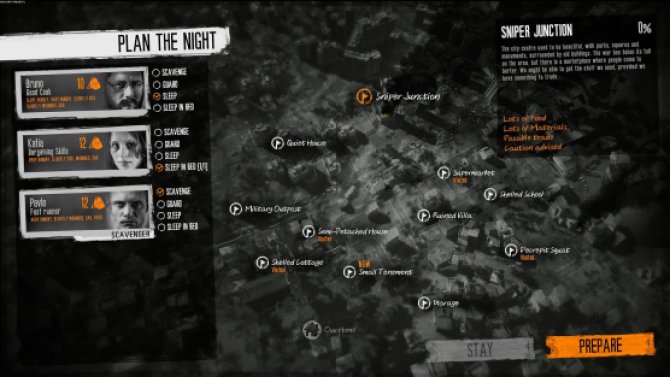 Above: You choose what each of your characters do and where they go.

A variety of locations

All of the places you’ll go to salvage are buildings, and developer 11 Bit has drawn them all in the same style. But that doesn’t mean they’ll feel the same. Each has its own personality based on what you find inside: different types of items to salvage and people to interact with or avoid, and differing levels of challenge.

You might target a hospital one night because you’re low on medical supplies, finding that other salvagers like you are generally either friendly or indifferent as they focus on their own needs. Or you might go to a house that has a lot of supplies because the people inside are fiercely hoarding — and are just as fierce about defending their territory. 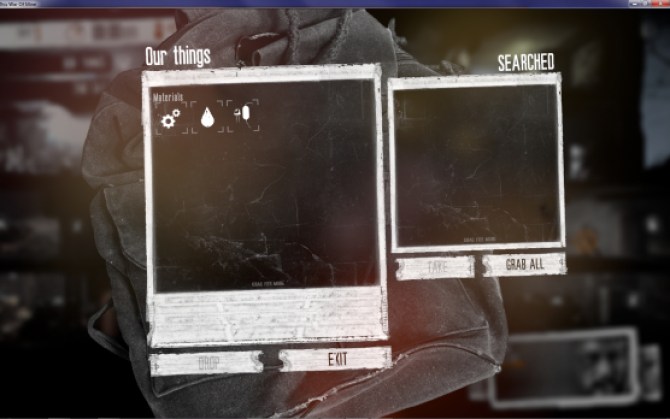 Above: Inventory and crafting screens are easy to scan and use.

This War of Mine gives you control of small 3D people in a large 2D setting. Most buildings have multiple levels, and the cutaway view shows what’s going on inside — at least as much as your characters can see, anyway.

The graphics are all done in a charcoal-sketch style that is beautiful to watch and brilliant at bringing contrast to those items that really need your attention. It’s a dark game, and the somber screens, all shades of gray, help to reinforce the mood.

Things you can interact with are prominently marked with an icon, so the small people don’t cause you to hunt, frustrated, for the right pixel to click. Salvage, crafting, and inventory screens feel thoughtful, designed to immerse the player in the story, and the technique works well. 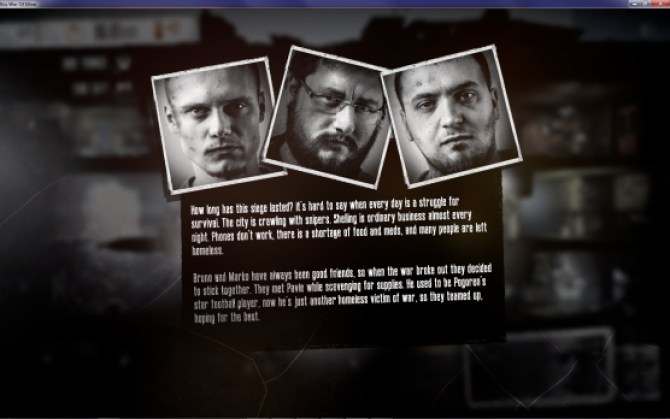 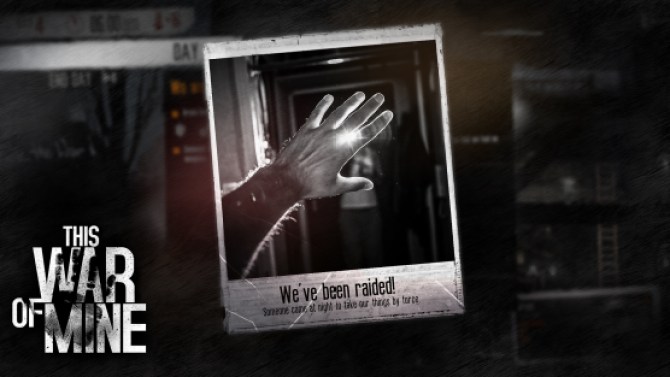