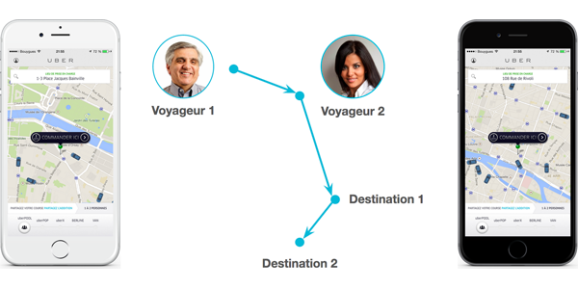 Uber announced today it has expanded its carpooling service to Paris, only its second city, a move that could mark the first step toward competing directly with French ridesharing giant BlaBlaCar.

In a blog post, the San Francisco-based company said “uberPOOL” lets users connect with individual drivers who are headed to the same destination, such as the airport. Uber says the service, which launched earlier this year in San Francisco, is considerably cheaper than taxi rates. If an uberPOOL is not available, then the company will offer a 10 percent discount on an uberPOP ride.

For the moment, Uber’s carpool service is primarily focused on travel within cities, both short and medium-sized trips. But tapping into the carpooling market brings it closer to competing with BlaBlaCar, which enables car sharing between cities. If uberPOOL gains some traction, it’s not hard to imagine Uber or its users beginning to use the service to book longer trips if the price is competitive.

The latest move by Uber comes as it continues to face a rocky regulatory landscape in France and across Europe. A Paris court recently fined the company for its marketing practices. It remains to be seen whether introducing this carpooling service will draw scrutiny from regulators.