Assassin’s Creed: Unity was one of Ubisoft’s big releases for this holiday, but it is stumbling — and that is hurting the French publisher.

Ubisoft shares are currently trading at $13.50 on the Euronext Paris stock exchange. That price is down 10 percent from the $15 the stock was worth on Tuesday when the latest Assassin’s Creed game made its debut. The market’s response is likely directly related to mixed review scores for Unity, which is out now on PlayStation 4, Xbox One, PlayStation 3, Xbox 360, and PC. The open-world action release has also drawn attention for its numerous bugs that are gaining viral traction. But Ubisoft is trying to respond quickly. The company announced that it is working on a patch to deal with the issues people are experiencing, and it is also saying that Unity might make it change how it releases games in the future. Assassin’s Creed is incredibly important to Ubisoft’s bottom line, and the company is trying to get out ahead of the criticism to ensure the franchise’s future. 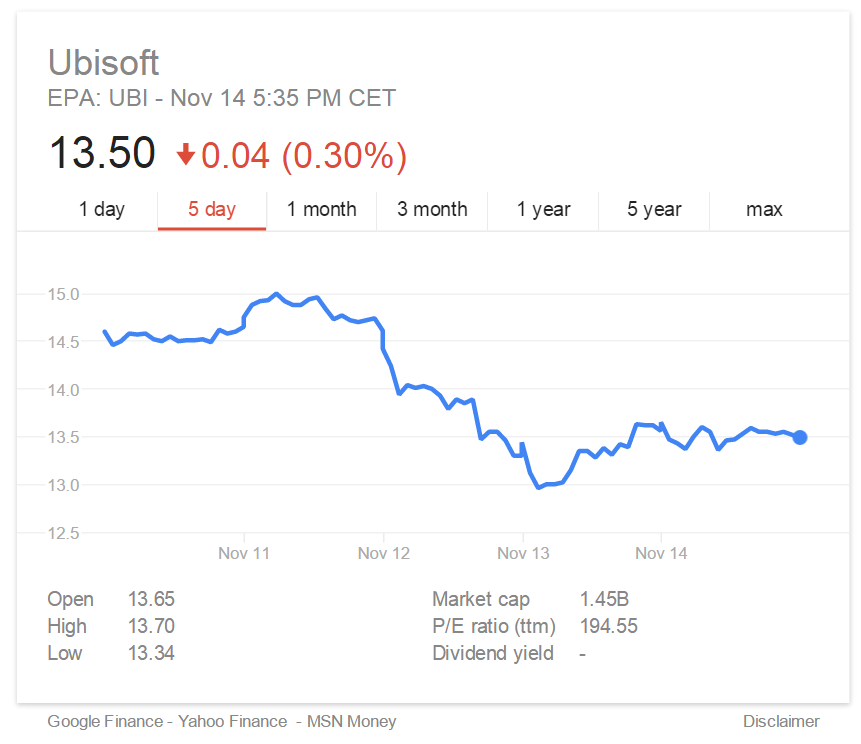 Above: Ubisoft is having a rough week, and its investors aren’t happy.

“We are working to adapt our services and communications with consumers accordingly,” an Ubisoft spokesperson said in a statement provided to the BBC. “Both by changing the way we work with reviewers and by offering customers open betas or other early access to some games — all so that they have the information they need and want.”

Assassin’s Creed: Unity is a massive game with a significant online component, and open tests or some kind of early access could have potentially helped Ubisoft discover bugs that it let get through into the retail version.

Ubisoft also came under scrutiny for setting the embargo (an agreement between the publisher and press outlets about when a review can go live) for 12 hours after the game went live. Working “with reviewers” suggests the company will try to avoid that in the future.

As for the patch, here is some of what Ubisoft is working on fixing:

The company says it is also looking at framerate issues that players are reporting. The game runs below 30 frames per second on both Xbox One and PlayStation 4, and it’s often much worse on Sony’s console.

Fans of the franchise are obviously upset. Ubisoft’s blog announcing the patch has nearly 4,500 comments from players reporting different issues or voicing their anger that this stuff wasn’t fixed on launch day.

We’ve seen this happen with other games before. Publisher Electronic Arts launched its military shooter Battlefield 4 in November 2013, and that title was plagued with connectivity issues and glitches that lasted for months. EA had to promise that developer DICE would not move on to any new projects or content packs until it fixed the game.

The concern for EA, and now for Ubisoft, is that these problematic releases have permanently damaged their brands. We’ll see what happens when EA unleashes the next Battlefield in 2015, but Ubisoft’s investors are obviously already concerned that Assassin’s Creed is in trouble.