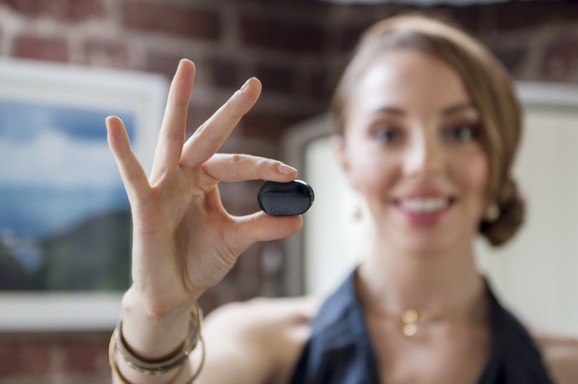 The Ditto has no buttons, no display, no lights, and weighs just 8 grams. All it does is vibrate to let you know when something important is happening.

Bob Olodort spent years working as a consulting designer for Samsung, in the years before the iPhone turned the phone industry upside down.

Four times a year, he’d visit Samsung headquarters in South Korea to present a handful of elegant, innovative phone designs that he had created, each one optimized to provide an ideal set of features for a carefully identified target customer. Each phone was a model of simplicity and elegance.

And then Samsung would get involved.

“They would louse it up by putting in everything — that’s their style at Samsung,” Olodort told me by phone today. A few young Samsung engineering managers would each add their own pet features. Later, the carriers Samsung sold to would insist on another set of features. Pretty soon the phones would be crammed with complexity and redundant features.

“You’d get exactly the opposite of what you’d get at Apple where you had Steve Jobs saying ‘No, no, no.'” After awhile, he got fed up with the “everything but the kitchen sink” approach to phone design and left to start his own company, designing his own devices.

Now that company, Simple Matters, is getting ready to release its first product. And the Ditto is even simpler than anything Jobs ever helped design.

“It has no display, no lights, no gimmicks,” Olodort said. No buttons. No switches. Nothing except a little 8-gram pod (6 grams if you take the clip off and just slip it into a pocket) with a Bluetooth connection to your phone and a powerful vibrating motor inside.

For $29, the pod serves as a remote vibrating notification device for your phone. You use a companion app (iOS or Android) to tell it what you consider important: your boss sending you an email, for instance, or the babysitter calling you during the day.

Then, when one of those things happens, the Ditto will vibrate, alerting you to the fact that there’s someone you actually care about trying to get in touch with you. You can even set different vibration patterns for different callers, so the babysitter is three short bursts and your husband is a single short burst.

Or, if you’re about to leave your phone behind at home or in a restaurant, the Ditto can warn you by vibrating. Because it works via Bluetooth, it’s got a super-simple proximity system: When it drops the Bluetooth connection with your phone, that means it’s out of range, so it will warn you. That can mean anything from 50 to 300 feet of distance, depending on local conditions. It’s powered by a standard, replaceable watch battery that will last four to six months, Olodort says. It’s completely waterproof, and should be able to survive a shower, a swim, or even being accidentally sent through the washing machine.

Ditto’s primary user is probably women who keep their phones in their purses and therefore miss notifications or phone calls. (It’s no coincidence that the Ditto is designed to clip to a bra strap, where it’ll be completely invisible.) But guys who have baggy pants who tend to leave their phones behind or who, like me, find that their phone is constantly switching itself into silent-and-not-vibrating-at-all mode might also welcome a secondary notification system.

Simple Matters is currently running a Kickstarter fundraiser for Ditto, which is about halfway toward its $100,000 goal with just nine days to go. But Olodort said he wasn’t terribly concerned about the possibility of the Kickstarter failing: He’s doing it primarily for the publicity purposes, he said, and the company will be producing the Ditto and shipping it early next year whether or not the Kickstarter goes forward. 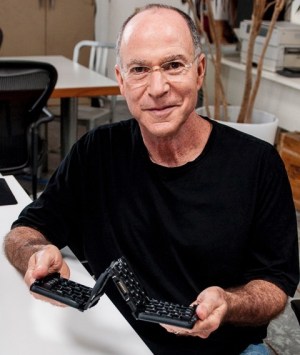 Above: Bob Olodort, the cofounder of Simple Matters, holding the folding Palm keyboard he invented in the early 2000s.

Olodort himself has a long career of invention already. For instance, he created a widely acclaimed folding keyboard for the Palm about 10 years ago.

Simple Matters has raised about $1 million in capital from private investors and employs about 10 people, plus contract engineers in Silicon Valley and elsewhere. It will employ Chinese manufacturers to create the Ditto, and employs manufacturing engineers in China. The company itself is based in Santa Monica, California.

The goal, Olodort said, is to create a device that is so simple, so cheap, and so useful that it becomes a “no-brainer.”

“I’m not wearing Google Glass. I’m not looking at my wrist every five minutes. I’m a professional. But I want to know when something important happens.”

With Ditto, he will.