From a single image to a mind-blowing trailer

It’s an interesting situation, finding yourselves the visionaries for a game that doesn’t yet exist. That’s what happened to the team at Platige Image when CD Projekt Red asked them to bring Cyberpunk 2077 to life. The two studios had collaborated since 2006 on the Witcher titles, but the brief for Cyberpunk was something altogether new.

“We had an extremely talented guy working on it: Maciej Jackiewicz,” said marketing manager Olga Cyganiak. “Because Tomek [Bagiński] was the director, but then he was also involved in another project for The Witcher, and that was going at the same time. Actually, almost one guy created all of it. That’s why there’s no animation. It’s very static because he had no more hands.”

So despite what the credits might say, the Cyberpunk 2077 trailer is very much one man’s vision: “The whole vision of it was the art director, Maciej Jackiewicz. In the credits, you have a lot of different people, but that’s his aliases.”

Above: Concept art for the Cyberpunk 2077 trailer from Platige Image.

The response to the trailer was incredible when it debuted nearly two years ago.

“I think that’s the most acknowledged work of ours,” said Cyganiak. “It was a smashing hit, with like 5 million viewers during the weekend. Everything went perfect here. The music is cool. It’s amazing.”

But they really had little to base the trailer on. CD Projekt Red had no game assets to work from, just a concept. “They had only the sketches from the [pen-and-paper] role-playing games and nothing else,” said Cyganiak, “so we had to create the world. It’s from the ’90s, right, the game and we had to put it like — you have to have this ’90s feel, but then it has to be futuristic.”

The perils of overpromising

With such a strong and widely viewed CGI trailer in place, I asked if CD Projekt Red’s vision now had to match that of Platige Image.

“That was the problem,” said Cyganiak. “We’ve created something and they used it actually for raising money for the project and for hiring people. That was the purpose of it — to make people interested in it.” Above: The original sketch that inspired the Cyberpunk 2077 trailer [left]. You can see the updated version of the sketch in the background of the trailer at 1:05.

Image Credit: Platige Image
And it seems that Platige Image is as in the dark as the rest of us when it comes to what Cyberpunk 2077 will actually look and play like when it finally arrives. “Actually, we have no idea what they are working on,” said Cyganiak. “They have something, and I know they are really very strict about it. We hope they’re going to come and work with us on the next cinematic. We’re keeping our fingers crossed.”Platige Image is well aware of the risk that CGI trailers can over-promise on what games actually deliver. With Cyberpunk 2077, that concern is greater, and CD Projekt Red feels pressure to live up to the hype.

“That was an awfully big risk that CD Projekt took,” said Cyganiak. “They asked us for a cinematic with no visual references for the game. In my opinion, they have to match a bit the cinematic.” 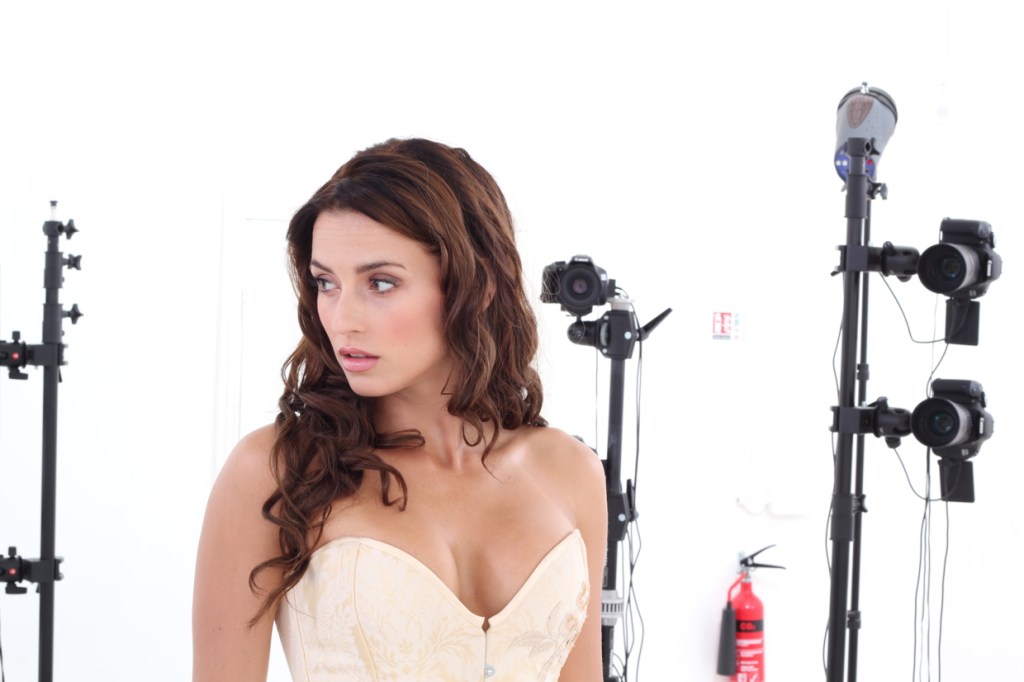 Above: Body-scanning the model used in the Cyberpunk 2077 trailer.

CD Projekt Red wanted the trailer ready for January 2013 to have half a year of team building and fund-raising for the game, and this didn’t give Platige Image much time. Because they were working to such a tight schedule, they used full body-scanning for the first time on the Cyberpunk trailer. “We couldn’t model the character by hand, so we went to the U.K.,” said Cyganiak. “We scanned a Playboy model and then did some work on the model, so that was one week instead of one month. After that we decided that we have to have our own body scan equipment and we bought it.”

The Fight Club of games

So, much of the mystery surrounding Cyberpunk 2077 remains, but at least we know a little more about it, not least that it’s an ongoing concern for CD Projekt Red. The fact that the developer has kept the game away from public view for so long is actually incredible, given that it’s an project with tens of developers actively working on it. It’s been in development since 2012 and has a multinational team in place, yet nothing has leaked. In that sense, it’s very much like David Fincher’s Fight Club movie. No-one talks about it.

But I’m sure I’m not the only one who’ll be eager to hear what CD Projekt Red has to say when it finally does start talking Cyberpunk. I’m already planning my next visit to Warsaw in 12 months time.