Above: Venice in Second Life.

GamesBeat: Have you talked about how many people are in Second Life right now?

Altberg: The monthly active user count is just south of a million. When it peaked it was just north of a million. … Second Life started development 13 years ago and reared its head 11 years ago. There are parts of Second Life that, yes, are old. It’s a challenge to get it to be competitive in today’s world, when it comes to devices or framerate or graphical quality, when you think about lighting and making something realistic looking….

[There are] a number of things that made Second Life successful but also constrain it a bit as far as how big a virtual world ultimately can be and should be. Which is why we’re investing a ton of energy into this next generation product. We’re going to solve the things we think are holding Second Life back. Performance, scale, graphical quality, ease of use, multiplatform. It’ll be able to be a great companion to new technologies like Oculus, where you need to have a tremendous framerate, times two.

That’s where we are. We’ll probably start revealing the beginning of this thing toward the middle of next year sometime. That’s what we’re shooting for. That beginning will not be as feature rich or enable all the use cases that Second Life offers, but for some of the simpler use cases, we’ll be able to do something that’s going to make Second Life jealous.

Altberg: Past creations from other companies have been positioned as virtual worlds but haven’t hit the same components that Second Life has: user-to-user economy, user-generated creativity, a communications platform, 3D building platform, scripting platform. All those layers that we’ve combined to make a virtual world, this next-gen project will be in that spirit, rather than just a reductive flavor of that. Maybe not at the very first, but … we don’t want to constrain what people can do with it.

Think about all the machinery or architecture or things you want to be able to simulate in advance of building them, or to train people. There’s an incredible number of business use cases that have barely even started, where you can get a large number of people to successfully communicate and collaborate and create in virtual space. They can be trained and teach in virtual space. We’re scratching the surface of what will ultimately happen. Aside from just all the social and entertainment possibilities.

It’s the power of being able to take someone to a completely different place and have it feel natural. When you’re in a virtual space, if you have the right user experience and performance, your brain cannot distinguish between the virtual and the real, which shows you the incredible power you can have in those contexts. Now that VR is getting this whole new extra boost of excitement and a tremendous amount of investment, whether it’s Facebook buying Oculus or Magic Leap, where people barely know what they do and they get $500 million, this is all great for us. The whole space of virtual reality is getting so much investment and momentum behind it. We’re sitting here with 11 years of operating a successful virtual-world business. We’re excited to take it to a whole other level.

At the same time, the rest of the industry will take it to another level with better input devices, whether it’s Leap Motion or SixSense or the new cameras that you can do interesting things with to read people’s expressions and transmit that to avatars. The human-to-human interface through the computer or device is going to a whole other level, which is awesome for us. It’ll make the types of experiences people create and have a lot better. 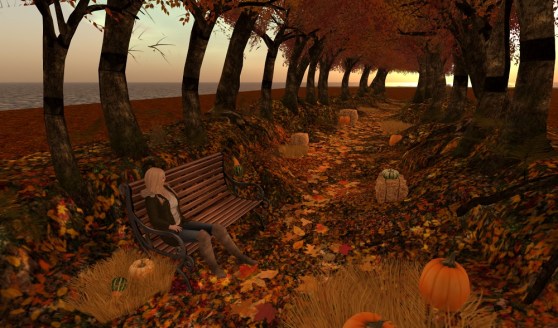 Above: Another scene from Second Life.

Altberg: For us, the more the merrier. … We’re not in the hardware business. We’re in the software business and in a special segment of user-generated content. We don’t create content ourselves. Blocksworld and Second Life and the next-generation platform are about enabling users to create experiences, as opposed to us creating the experiences. Most companies around don’t take that user-generated content approach. They build some experience themselves.

The reason we did Oculus with Second Life is not necessarily because we think they’re the perfect marriage. There are constraints with Second Life with regards to its performance. You’re not going to get the framerate you need for it to be a consumer-grade perfect fit. But we’re learning a ton. We’re going to apply all these learnings to the next-generation platform. Our content creators also learn a ton about how you create content that’s optimized for this device. 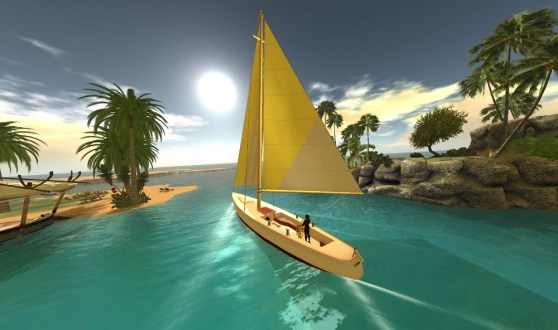 Above: A sailboat in Second Life.

You might see a bit of a jitter as you move your head around. It’s not completely smooth. Things will improve, both through things we’re doing to Second Life and things that Oculus is doing, but in the meantime, I don’t want you to think that we’re trying to tell you that Oculus and Second Life are the best thing since sliced bread. It’s still early.

We’re in the process of learning. Our creators appreciate it a ton that we’re doing this, even though it’s not perfect, because they’re able to understand what the future is going to be like. They can re-experience the content they’ve created. We’ve heard some things already; “I would have made this thing differently because now I’m able to walk around it and my perspective is totally different.”

No matter what, when people can actually be inside their experiences with the Oculus, it’s incredible. Jo Yardley, which we can talk about more later, she’s built Berlin as it was in the 1920s. She has a large, extremely happy and devoted community that lives there. When she was first able to go in to Second Life with the Oculus and actually be inside her own creation — not looking at it but being inside it — she cried. It was just so powerful to have that experience.

GamesBeat: Can you put basically any Second Life location in Oculus? 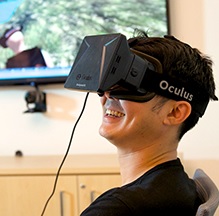 Above: Viewing Second Life via the Oculus Rift.

Altberg: Everything in Second Life, everything, over a petabyte of user-generated content, is all available to use with the Oculus. We probably have more creators for the Oculus than anyone else. They just don’t realize it. And anyone can be a developer, if you want to call it that, because obviously creating in Second Life has a much lower technical burden than if you were to license Unity or Unreal and hire an engineering team and build a 3D experience. That’s a huge effort.

In Second Life, I would say normal people … Jo, that built this stuff, she’s not a technical person. She was just inspired to create a virtual space that she was passionate about. She figured out how to do it. We’ve lowered the bar for who can create a virtual experience beyond what anybody else has. Anybody with the Oculus today can download the Second Life viewer and explore the entirety of Second Life with Oculus, with the caveat that not all the user-created experiences have necessarily been optimized for it. It will all work. You can cruise around, chat with people, explore their experiences. A lot of Halloween content is out there right now, looking to scare folks. It’s all there.