The massively multiplayer online PC gaming market is expected to grow from $24.4 billion in 2014 to $30.7 billion in 2017, according to a market research report by analyst firm Newzoo and performance marketing firm Ad2Games.

The companies published the report on the eve of the G-Star game conference in Busan, South Korea, where online games are huge.

The cost of acquiring users varies greatly by territory, ranging from 37 cents per user to $5.63.

Johannes Rolf, chief marketing officer and managing director of Ad2Games, said in a statement, “The games industry continues to be extremely dynamic. It is crucial to understand current and future developments, especially around user acquisition. With the experts from Newzoo, we are able to provide key insights that show what is currently happening and how things will develop in the years to come.”

The overall PC/MMO market will grow at a compound annual growth rate of 7.9 percent from 2014 to 2017. The market growth is being fueled by the rise of free-to-play games, growing 12 percent annually. But pay-to-play online games, where users reach a certain point in the game and have to pay to proceed further, will decline 0.9 percent per year.

Newzoo CEO Peter Warman, also said in a statement, “PC Gaming has always led the games market in terms of innovation and will continue to do so. No other platform meets the increasing desire of consumers to create and share content this well. Obvious evidence of this is the uptake of e-sports in the West and the popularity of consumer-generated video.”

Warman added, “Free-to-play PC games have lowered entry barriers, increased gamer numbers significantly, and facilitated globalization. But free-to-play as an industry term is set to vanish, and hybrid business models will become the norm. Combined with the insights from user acquisition experts Ad2games, we want to emphasize the strength of PC gaming at a time that a lot of press and analyst focus has shifted completely to mobile.”

Asia Pacific has the largest overall revenue in 2014 with $14.19 billion, accounting for 58 percent of the total. MMO games generate 70 percent of global PC/MMO revenues, totaling at $17 billion, with 85 percent of that coming from free-to-play.

Meanwhile, Eastern Europe shows the fastest growth of free-to-play, with a CAGR (compound annual growth rate) of 17.4 percent. The average cost per loyal acquired player is highest in Korea and Japan (browser games at $4.38; client games at $5.63), and it is lowest in Latin America (browser: 36 cents; client: 86 cents). 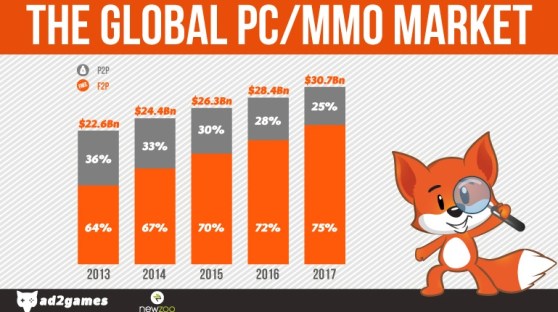