Gamers are crazy for PlayStation 4 right now, and a lot of that has to do with a perception that Sony has its game together. But that image is starting to unravel a little bit due to its issues with updates and online.

Since PS4 launched in November 2013, Sony has released four major updates for the system’s software. It has added requested features like 3D Blu-ray movie support and a video editor called ShareFactory. But things fell apart for Sony when it introduced the 2.0 update for PS4 on Oct. 28.

Filled with bugs and broken software, update 2.0 introduced a number of problems for PS4 owners. Many found that the system would get stuck in the new “Rest” mode. Others had the system freeze or take minutes to complete simple tasks. It even interfered with the performance of the Blu-ray drive. Since then, Sony has introduced two new updates on Nov. 5 and Nov. 11 to fix the 2.0 update. The system is more stable now, but it took two weeks to get to that point.

PlayStation 4’s system software is not Sony’s only problem right now. One of the company’s big exclusives, the racing game Driveclub, is busted. The $60 release doesn’t work online. Sony has disabled a number of features to get it working in a limited way. The publisher has even delayed the free PlayStation Plus version of Driveclub until it can get it functioning for those who bought it.

Sony’s PS4 updates are inconsistent, and the company’s quality-control department has let a lot of problems slip out into the public. Driveclub’s online is a debacle on the level of SimCity. But at least the company is rolling out some new features. 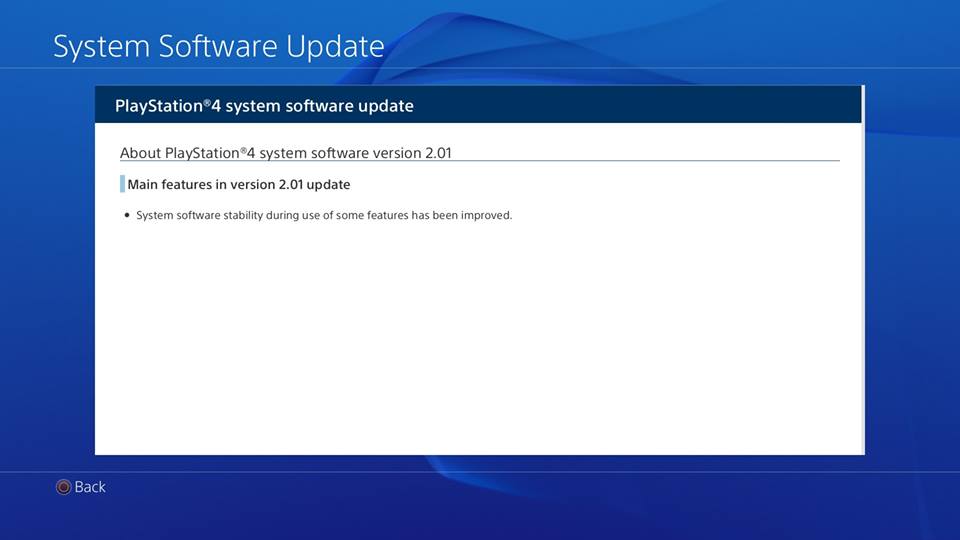 Above: It took multiple attempts for Sony to get its latest PS4 update working.

You typically don’t see a lot of movement in terms of price within the first year of a console’s life. With the PS4 selling well, you’re likely not going to see any price drop for a while. Thois makes sense, but the Xbox One has dropped from $500 down to $350 (at least for the holiday), and that comes with a pair of games. For comparison, you can get a PS4 for $400 with Grand Theft Auto V and The Last of Us: Remastered.

You can also get a white PlayStation 4 with Destiny for $450, but that again doesn’t look great compared to the competition. Microsoft has a white Xbox One with its exclusive Sunset Overdrive for $400 or a Call of Duty: Advanced Warfare bundle for $450 that comes with a 1TB hard drive.

Sony isn’t doing a terrible job of creating value with the PS4, but the company seems like it is selling every system that it ships regardless of the price.

The price isn’t bad for what you get, and it only looks bad in comparison to a desperate Microsoft.

From a strictly financial viewpoint, the PlayStation 4 is absolutely on top right now, and it’s one of the best-selling products at a company that has struggled in recent years.

“Sony fixed everything wrong with the PS3 this time, and successfully exploited Microsoft missteps with DRM and specs,” he told GamesBeat. “PS4 deserves to be in first place.”

While the analysts are impressed, PlayStation 4 is better as a promise than a reality right now. It’s a fine system with a ton of potential, and Sony spent 2014 building a substantial lead over Xbox One and Wii U that should the company well through the next several years as more developers start focusing their efforts on the hardware with the most owners. But over its first 365 days, the system hasn’t broken out to justify how its blazing selling. Sony has even admitted that it doesn’t know why PS4 is so popular. That doesn’t mean the company won’t eventually deliver — early 2015 is stacking up nicely with PS4 exclusives like The Order: 1886 and Bloodborne.

If you already own a PS4, you should feel pretty great about its future. If you don’t have one, you won’t miss much if you keep waiting until next year.