New photo messaging app Unseen thinks the road to success should be anonymous and go through the country’s most active universities and colleges.

Unseen launched in July out of software company Bearch as a simple photo wall where collegiate communities could anonymously post images via their iOS or Android mobile devices. It doesn’t really act as a full-fledged social network the way Facebook is, and communication is limited to each community. 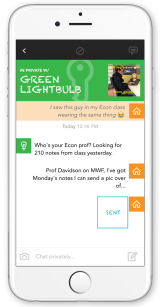 You can add notes to photos (as shown in the image above) for context or humor.

And today, Unseen is rolling out an update that brings direct messaging to the service. Those messages are encrypted and stored only on the devices of the sender and recipient, so there’s less chance of a security breach leaking private information to the public.

“The larger a college campus is, the lonelier and more disconnected a place it can be,” founder Michael Schramm told VentureBeat. While people certainly find a core group of friends by their second year of school, Schramm said, it becomes harder to “breach those social bubbles” to meet new people with similar interests.

“What we’re trying to do with Unseen is provide a very simple, anonymous platform students can use to connect with others on campus … because when it gets too complicated, that’s when communication breaks down,” he said.

Schramm said the biggest reason Unseen is getting the direct messaging feature is because the team noticed how people would attempt to extend a conversation started via the photo wall by listing screen names for other services like Kik or Snapchat. That makes sense because it means that users aren’t hopping away to rival services.

Unseen’s strategy for scooping up new users harkens all the way back to the early days of Facebook. The app, which is available on iOS and Android, is only available to those attending a college or university. On top of that, Unseen requires a certain threshold of users to sign up for each college before it becomes accessible. Right now, Schramm said, there are about 150 college communities using the app, but new communities are meeting that threshold every day. 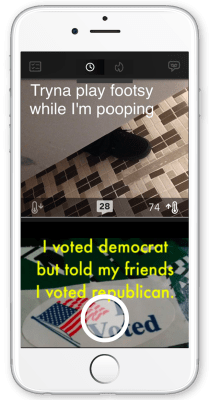 Above: More examples of things being shared via Unseen.

As for what’s been popular on the service, Schramm said he’s seen everything from students looking for people to go to a party before sporting events to subtle requests for help to people just looking to connect outside their dorm rooms.

Unseen faces some big challenges, like competition from a plethora of preexisting photo sharing apps (Instagram, Snapchat, Whoshere, etc.), some of which also focus on security. Since Unseen’s communications are anonymous, there’s always the possibility that the service will be used to break the law. For instance, you might recall VentureBeat reported earlier this year that Instagram was being used to sell illegal drugs.

“We do have moderators scanning each community and removing content if it violates our terms of service,” Schramm said. “So if we see someone trying to buy Adderall, we yank it immediately.”

Founded in 2014, the Austin, Texas-based startup has raised a total of $2.4 million in funding to date. Unseen currently has four full-time employees and faces indirect competition from a variety of geolocation-based photo sharing apps. Schramm said the service is still determining how best to generate revenue.