Disclosure: The organizers of Slush paid my way to Helsinki. Our coverage remains objective.

HELSINKI — In front of a giant and sympathetic crowd here, Nokia unveiled its N1 Android tablet. The new device marks the Finnish company’s return to the consumer market in the wake of selling off its devices business to Microsoft for $7.17 billion earlier this year.

Numerous attendees at the Slush 2014 startup event in Helsinki wondered if Nokia would wind up competing with its former self and what it would really accomplish with the late move into Android tablets.

For starters, Microsoft already has a branded Nokia Lumia 2520 tablet that runs the Windows 8 operating system. So we’ll see a Nokia Android tablet competing with a Nokia Windows tablet, sold by two different companies. Microsoft has renamed its Nokia handset business Microsoft Mobile, and most of Nokia’s consumer product designers were part of that group.

But Microsoft also laid off tons of Nokia employees, and the rest of Nokia, which is focused on mobile infrastructure, didn’t lose its desire to compete in consumer devices. Microsoft apparently did not intend to hang onto the Nokia brand, or at least it will not keep it entirely to itself. Microsoft only had the right to field Nokia-branded phones for 18 months. And Nokia gave Microsoft its Nokia web sites. If you try to look at the Nokia N1 Android tablet by typing in a search for Nokia, you’ll go to a web site that sells Microsoft Windows products. That’s puzzling in itself.

Adding further to the confusion: Before the event, Nokia showed off a box that looked like a set-top box, leading to speculation it would introduce such a device for the living room. The image spread across the Internet. Now it turns out that image was just the box for the tablet. Nokia is going to have do a lot of additional PR just to counteract the false impression it created by teasing the product with that image. 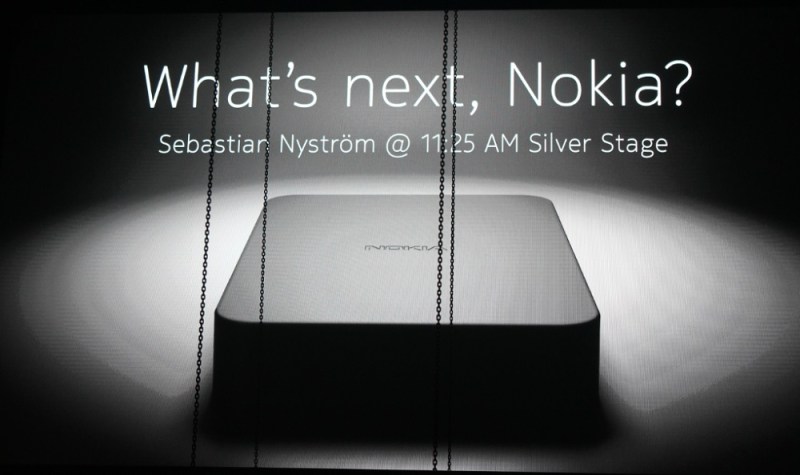 In its favor, Nokia did not just slap its name onto another Android tablet. It also unveiled its Z Launcher smart Android user interface today.

The new app lets you scribble on a screen as a short cut to call up what exactly what you want to find, said Sebastian Nystrom, Head of Products at Nokia. The app is available for free. It is published in the Google Play store for Android devices.

“This conference is about new beginnings, and we have a great new beginning to share,” he said. “It is the tablet that thinks ahead.”

Anticipating a question about why Nokia was doing an about-face, announcing a mobile device after selling off its mobile devices business, Nystrom said the team decided at heart, “We are about bringing the magic of technology to real people. Nokia is about making great design better and available to everybody.”

Nokia will launch its N1 tablet in China in time for Chinese New Year in the spring of 2015. By then, some of the agreements with Microsoft — which restrict Nokia’s ability to compete — may begin to expire. It will introduce the 7.9-inch N1 in more countries after that. Foxconn, which makes similar products, like the Apple iPad mini, will manufacture Nokia’s tablet.

People that I spoke with wondered why Nokia was moving into Android so late and whether the Z Launcher was really enough of a differentiator to justify the new device. Nokia may provide more clarity in the coming days.