The space strategy game Galactic Civilizations III offers players a surprisingly sophisticated ship builder as part of the game. Gamers can design their fleet by picking out parts and dramatically reshaping them, grouping them, creating new functions, and combining them into new forms.

Designers at Stardock Entertainment played with the tools and invented a wide variety of ship shapes. When I visited Stardock headquarters earlier this fall, I saw a few examples in progress that were both beautiful and complex.

(And I heard a few stories about other tests — what would you make a flock of ships look like if you had a dirty mind and they could resemble anything you chose? Yeah, they did that, too.)

But Stardock wanted to see what else players could come up with. So the company offered $1,000 and eight spots in the game to players from GalCiv III’s early access beta who submitted their own ship designs. Contest entries closed Sunday, and player voting on the eight finalists (by anyone with a Stardock account) starts today.

“I am always amazed by the ships players create,” GalCivIII lead designer Paul Boyer said. “They think of crazy combinations of parts that I would never have thought of using, and get incredible results.”

We asked the developers to send us, not the list of finalists — and none of these are — but the ones they thought were interesting. These are the quirky, the offbeat. Some are beautiful. Some are just… weird. For each, we’ve included the short text that the player submitted with their design. You be the judge. 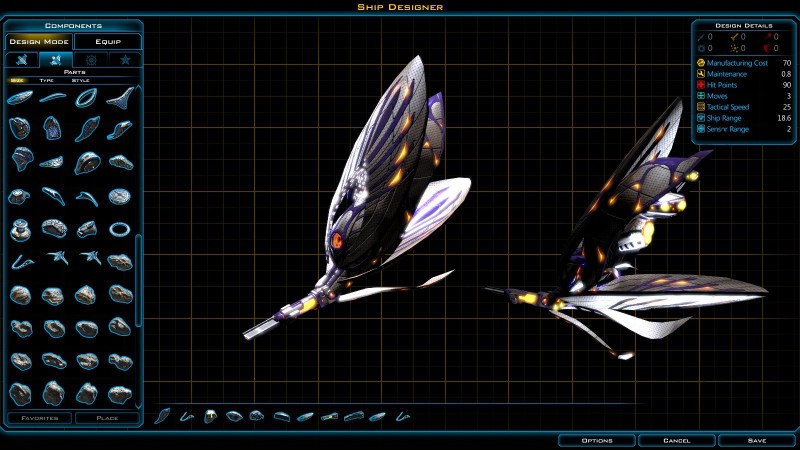 Above: From KainsRache666: "I really like the idea of organic designs, so I tried to create some kind of scout ship, which might be inspired of some kind of insect. I imagine it to have its shell closed when warping and fully opened when scanning its surroundings. The shell itself is meant to feature a huge antenna, and the 'eye' on the front would be a sensor array."