It was three weeks before Christmas, and Adam Langridge was shopping for a female action figure for his daughter.

The Wonderstruck Games developer went to three different shops and couldn’t find a single one. “I eventually found one, and it was Supergirl, but it was Supergirl beaten up, and her clothes were torn, and she was cut and bruised. And the whole point of this girl was that Superman could save her. And I was so angry about it. I got really, really cross,” he said.

Langridge would later rant about the experience at an office party, leading one coworker to suggest that Wonderstruck make the main character of its latest project, an action-heist game for PC out on Nov. 20, a woman.

And with that one suggestion, Sophia Take, the eponymous heroine of The Marvellous Miss Take, was born.

Sophia Take is not your usual video game character. With her stylish wide-brimmed hat and purse, she looks like she’d be more comfortable breakfasting at Tiffany’s with Audrey Hepburn than pilfering paintings from gallery walls. Yet that’s exactly what she sets out to do after someone steals her family’s art collection and splits it up among various private collectors.

Making the game’s protagonist a woman immediately made it better. “The strange thing is, if we had used a white, male protagonist, when you see that kind of character in a video game your preconceptions of that guy is that he is good at violence,” Langridge said. “And we absolutely knew that we didn’t want to have that in the game. So the best solution for that, the verdict, seemed to be to have this completely different character who you wouldn’t expect to [see] in lots of other games. And that was someone who was, like, a cool lady with a cool handbag and hat. And with that character, with Sophia, it’s not that you come with different expectations, it’s just that you come with no expectations. And it allows us to set the agenda of what this character can do.”

Wonderstruck’s desire to do something different weaved throughout the development of The Marvellous Miss Take. Bright and cartoonish, its visuals draw from classic heist movies like The Pink Panther, The Thomas Crown Affair, and Ocean’s 11, and its stealthy, nonviolent gameplay seeks to subvert standards seen in such games.

“In a lot of stealth games, the standard thing you do is you hide behind a wall, you watch the guards, guard patterns or whatever, the usual thing. But as soon as the guard looks away, you creep up behind him, knock him out or shoot him, thrown him in a corner, and then carry on. And you can just sort of very methodically pick apart the entire puzzle of the level and that sort of thing,” said Wonderstruck designer/programmer Chris Matthews. “So from a gameplay point of view, we just thought, well, it’ll be more interesting if you can’t just knock out a guard and then you don’t have to worry about him for the rest of the level. So you just constantly have to be aware of your surroundings.” 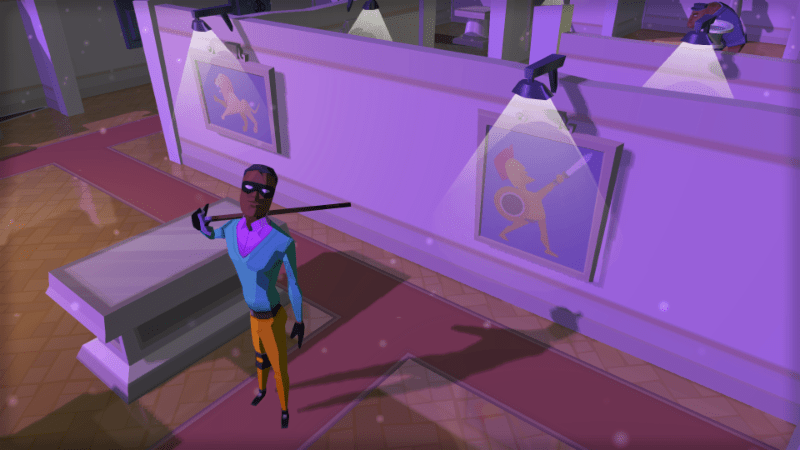 Above: Harry Carver is a character designed for those looking for more of a stealth challenge.

Sophia gets a partner in crime

Although The Marvellous Miss Take is a game about outrunning, distracting, and outwitting guards, Wonderstruck realized it had room for a more thoughtful approach. It wanted to create a foil for Sophia, an experienced thief forced to walk instead of run.

A dashing rogue with a walking stick and a knee brace, Harry is Sophia’s mentor and love interest. The concept for Harry began with an old Shigeru Miyamoto interview, where the legendary Nintendo game designer said it was possible to complete all of Super Mario Bros. without collecting a single coin. That got Wonderstruck thinking about how it could add that level of challenge to its own game.

“Playing as Sophia, it’s a pretty difficult game, but once you get very, very good at the action side of it, you can pretty much react to any situation that happens,” Matthews said. “You don’t have to think far. You don’t have to think 10 seconds ahead, because you know if something goes wrong [you] can probably react and improvise and do something cool. But we realized that if you try and play it without running and just walk everywhere, it is still possible, but you’ve really gotta play a more slow-paced planning style, thinking ahead.”

“We always tried to regard Harry as the expert mode,” Langridge said. “So you’d crack a level with Sophia and you’d feel pretty good about yourself. A few levels on you might want to go back to it as Harry and try to beat the level with a different set of skills, with different paths open and closed to you, and go after different objectives. And it feels completely different to play.” 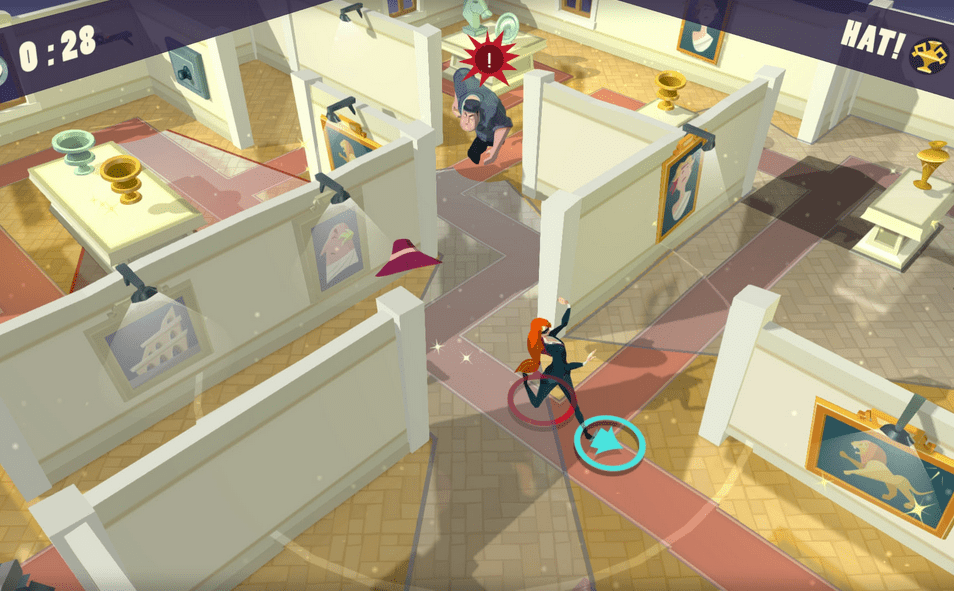 Above: Sophia must think on her toes to outwit and outrun guards.

The Marvellous Miss Take has made the rounds at game shows like EGX London, and so far the reaction has been positive. Man or woman, young or old, Wonderstruck said people find something appealing about this unusual heroine.

“When we first showed it earlier on in the year … we had a lot of proper gamers coming by and we had this fantastic, big, white, burly-looking bloke come over and look it up and down and then the first thing he said was, ‘Oh, yeah, I love how it’s a woman. You don’t see that much. Yeah, that’s really good. I like that,'” said Langridge. “And then he sat down and played it and got on really well with it.

“We’ve noticed that for the first time of any game that I’ve seen, that I’ve been associated with, that everyone sort of sees it and is interested. Men and women. And all like it for the same reasons. And there hasn’t been a divide. I guess some people think, ‘Oh, it’s a female heroine, men won’t be interested.’ But that hasn’t been what we’ve seen at all. Men dig it, and also the ladies dig it, too, which is fantastic.”