On Friday morning, Nov. 7, Chris Metzen was standing in front of thousands of people on BlizzCon’s gigantic main stage. He looked like he was on the verge of tears. His voice was wavering. The hand holding his mic was shaking. And people in the audience started drumming their legs in anticipation.

The senior vice president of story and franchise development was building up to a historic moment at Blizzard Entertainment’s annual fan convention. He was about to announce the studio’s first new game in 17 years that isn’t related to its three popular franchises (Warcraft, StarCraft, and Diablo). Overwatch, a stylized team-based multiplayer shooter for the PC, made its debut with a short animated film, winning the crowd with its intriguing premise of dueling superpowered agents and a triumphant musical score.

Metzen’s nervousness wasn’t just tied to a new game announcement. Overwatch is just the latest result of a years-long change going on within Blizzard. The company is no longer relying on just triple-A blockbuster products that retailers can stock on their shelves. Hearthstone: Heroes of Warcraft and Heroes of the Storm have led the charge for smaller, digital-only releases. They’re part of genres (collectible-card game and mobile online battle arena, or MOBA, respectively) and business models (both are free-to-play while Overwatch is still undetermined as of this writing) that are brand new for Blizzard.

Together with World of Warcraft, Diablo III, and StarCraft II, this is perhaps the most diverse lineup of games the developer has ever had in its 23-year history. The energy and enthusiasm that surrounded them was palpable at this year’s show, where I saw a confidence and swagger that wasn’t present at BlizzCon 2013. According to the people who make those games, it’s exciting to watch Blizzard undergo this transition. While they say they never lost their passion for game development, it’s also never been this open and transparent for the world to see. 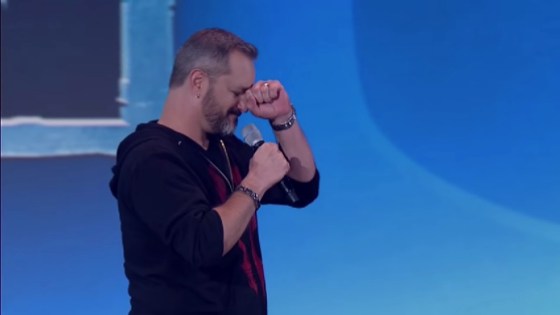 Above: Metzen getting emotional just minutes before the Overwatch reveal.

‘We didn’t go anywhere, but we’re back’

A few hours after the announcement, Metzen and Overwatch game director Jeff Kaplan were sitting in front of a substantially smaller audience at a press conference. Metzen sounded noticeably more relaxed, if a little exhausted. He spoke about how important working on Overwatch and other recent games have been for the company.

“What you see happening in the last couple years with Hearthstone, Heroes, Overwatch — we can talk about Overwatch! Holy shit! Sorry. I feel like … I almost said this at the opening [ceremony]: We didn’t go anywhere, but we’re back,” said Metzen. “I feel like this studio’s sense of raw energy and creativity and focus and appreciation for maybe even smaller scale projects has been rekindled. It has no bearing at all on the fact that World of Warcraft is our most precious, precious product. We have obviously a really great team driving that business.

“But you start to see this spark now — smaller points of engagement — that are totally driven by passion, totally driven by people geeking out of their minds. You can feel it around the studio. It’s wonderful. Right after 20-something years, it’s the coolest time to be at this place.”

That wasn’t something I expected to hear from the people who made the incredibly popular World of Warcraft, which is still a vital part of Blizzard’s (and parent company Activision’s) business. The massively multiplayer online role-playing game is turning 10 years old this month, and its fifth expansion, Warlords of Draenor, came out on Nov. 13. But operating such a large game for so long overshadowed what Metzen calls their creative “spark.” Blizzard was in danger of becoming “the World of Warcraft company.” 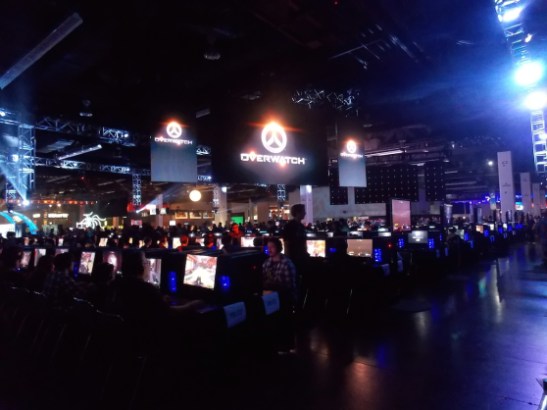 Above: The Overwatch demo area had 600 PCs loaded up with Blizzard’s latest game.

That line of thinking eventually led the company to begin work on Titan, the codename for their successor to WOW. Unfortunately, development didn’t go smoothly. In spring 2013, Blizzard scrapped its original plans and started over from the beginning. And just a few months before this year’s convention, Blizzard told video game site Polygon that it actually canceled the game after it couldn’t find a way to make its ambitious ideas work.

The topic of Titan was unavoidable at the show. Several reporters at the press conference asked if Overwatch had any connection at all to the failed MMO. Kaplan gave a diplomatic answer, saying they borrow ideas from past Blizzard games all the time and Overwatch has just as much of Titan in it as it does of WOW. While Metzen didn’t want to get into their original vision for Titan, he did touch on the challenges they experienced in trying to turn it into a reality.

“I can tell you what it was: It was frustrating,” he said. “It was a big, giant idea. It was almost like six video games in one. … And we wrestled with it for a long time. And it sucked. We couldn’t figure it out.” 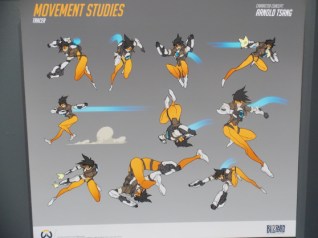 Above: Concept art of Overwatch’s Tracer.

The idea for Overwatch brought them out of that funk. Kaplan described how it took over the studio in a “grassroots” way, drawing attention and excitement from folks who were working on other projects. When they decided to go all-in on it, Metzen says “the music just exploded.

“We started looking at this game for what it was, and it just unleashed this tidal wave of passion and certainty and distilled, clear ideas. … It was just this monstrous thing of energy,” he said. “It’s been the funnest year getting our feet back under us, getting our surety back.”

Listening to them talk about their comeback story (and the fact that they even needed one at all) was fascinating — how often do you hear a developer as big as Blizzard admit its faults out in the open like that? It affected my perception of the rest of the show. I couldn’t help but see the higher production values at BlizzCon 2014 as Blizzard’s way of sharing that newfound energy with 25,000 of its biggest fans.