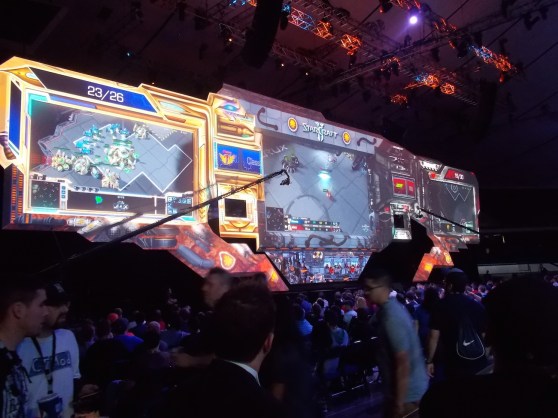 Above: The StarCraft II competitors sat in soundproof rooms (those two black boxes in the middle of the stage).

If for some reason you only had time to check out one thing at BlizzCon, it had to be the StarCraft II tournament stage. The animations and scenery projected on the giant screen made it feel alive. It had a bunch of different backdrops, and the borders changed depending on which race players chose (the Zerg, for example, had pulsating tentacles and purple goo surrounding the player’s screen). When a match was over, the stage would change again to reflect the winner’s side.

Chris Sigaty couldn’t believe how well it turned out. Though he didn’t have a hand in building it, the executive producer of StarCraft II and Heroes of the Storm says he would love to “unleash” his artists on it for future shows. Sigaty has been with Blizzard since its early years. He started out as a tester for Beyond the Dark Portal, an expansion for the real-time strategy game Warcraft II: Tides of Darkness.

He’s less than two years away from earning his helmet, which is given to employees who’ve been with the company for 20 years (they get a sword at five years, a shield at 10, and a ring at 15).

“Yeah, we’ve changed. … We’ve changed how we talk, how we listen, how we interact,” said Sigaty. “Internally, we’re doing a lot. Even how teams are individually just reaching out to communities: ‘What do you think? Come check out what we have.’ We’re trying to have a much more open-arm approach. There’s some level of perception out there that I see when I read that Blizzard has traditionally been more behind a wall. I don’t think that was ever an intentional thing. … That’s not who we are.

“There are a lot of passionate individuals who’ve been here for a long time, and a lot of great new talent all coming together. There are people running relatively small teams doing really cool stuff. I’m super excited to be a part of it. I think the spark has always been there, but it’s much more visible now.” 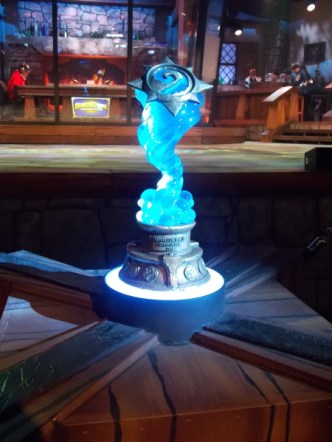 Above: The shiny Hearthstone trophy.

StarCraft II wasn’t the only game that had an amazing stage. For the Hearthstone World Championship, Blizzard built half of a tavern inside of the Anaheim Convention Center. The level of detail was astounding. It had the kind of attention and care you’d normally find at a Disneyland ride.

Players sat at opposite ends of a long dinner table while a digital fire flickered next to them. Stacks of casks hung near the walls. The staircases leading backstage even had framed pictures of art from actual Hearthstone cards.

It looked almost too pretty to break down. But Hearthstone senior producer Yong Woo assured me that it’ll live on in some form at future tournaments. He says they’ve been “fighting tooth and nail” to bring pieces of that stage back to their Irvine, Calif. headquarters.

Woo joined Blizzard five years ago, where he helped out on other games before becoming a part of the Hearthstone team. He thinks the company is in the middle of a “transformative” time.

“What does it mean if we don’t sell boxed products? What does it mean if we do online-only distribution? It’s been really exciting,” said Woo. “I go to work every day, and it just really feels like we’re innovating, we’re growing, we’re learning. And Hearthstone — every day is about learning. We’re doing things we’ve never done before. We get this data about new experiments we’re trying: ‘How is that venture doing? How’s it being received? How is the expansion being received?’ It’s been a super positive and amazing experience.”

Although Hearthstone only came out of beta earlier this year, it already has 20 million players across PC, Mac, and iPad (support for Android tablets is coming in December). Blizzard released a single-player update, the Curse of Naxxramas, this past summer, and it’s getting ready to introduce 120 new cards in the upcoming Goblins vs. Gnomes expansion.

“It’s never stagnant. That’s kind of the best part: We’re always evolving,” Hearthstone software engineer Rachelle Davis added. “We iterate over and over and over until … well, actually, always. We never stop. [Laughs]” 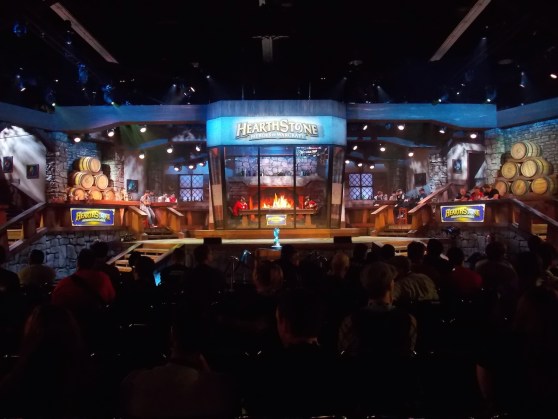 Above: Hearthstone developers worked closely with a stage designer to make this come to life.

‘I don’t care if it cracks the world’

Between new expansions, multiple e-sports tournaments, details about the live-action Warcraft movie (see the gallery below for pics of the props), and interesting panels, it was impossible for me to see or play everything at BlizzCon 2014. It was so busy that WOW senior designer Brian Holinka felt like his team could just kick back and enjoy the show because they didn’t have much left to say before the Warlords of Draenor launch.

That WOW wasn’t the main draw of the show speaks volumes about how different this BlizzCon felt from last year’s. The explosion of energy that Metzen was talking about was evident in the developers’ words and reactions. After the crushing failure of Titan, they desperately needed to get back into a groove, and they found it by focusing on these smaller projects.

“Recognizing that our power comes from the simplest place — just the passion — that’s the thing we know,” said Metzen. “When we’re erring on the side of that, we’ll probably be OK. … For me, this is my opinion: I don’t care if [Overwatch] cracks the world in half with its economics. I don’t care at all. I just love it. And it’s so cool to get back to that place of just developing from that core passion.” 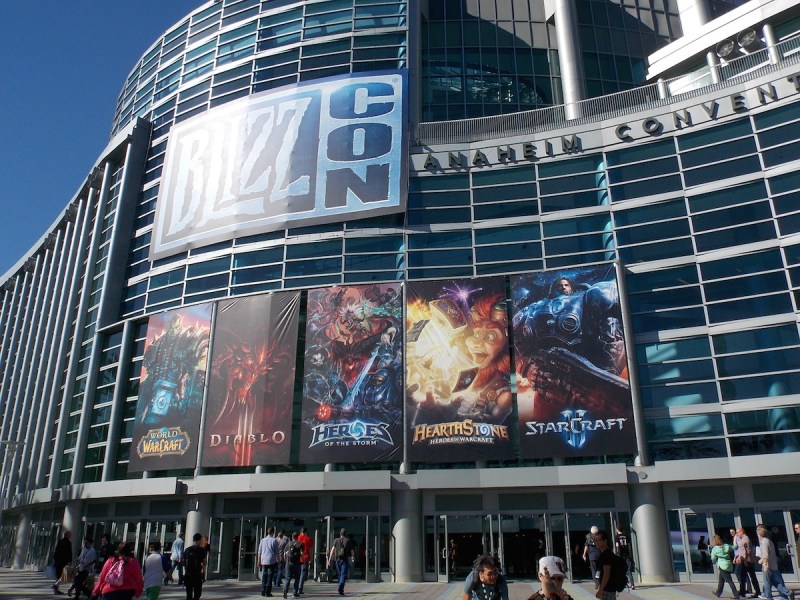 Above: Expect to see an Overwatch banner up there next year.