Would you be too embarrassed to ask Victoria’s Secret questions about their products because they could track you later and send you followups?

A product of Montreal-based tech incubator Virtual Artifacts, the new site and app allows a user to sign on with their Facebook credentials, and then set up various selectable identities, including an anonymous one.

A user can choose one of those identities whenever interacting on the site, which consists of topic-based discussion groups where users can post their comments, add images or other media, and like individual comments. Brands and interests you have liked on Facebook automatically populate your groups, but a user can create new groups.

The problem Social X is trying to solve is not just the embarrassment of users, CEO Jean Dobey told VentureBeat.

“We were trying to solve the issue of engagement on Facebook,” he said, since his company sensed that brands were not having honest dialogues with users concerned about saying too much in their own voices.

“People should be able to freely express themselves,” marketing VP Tim Morris told us. “They’re self-censoring themselves.” 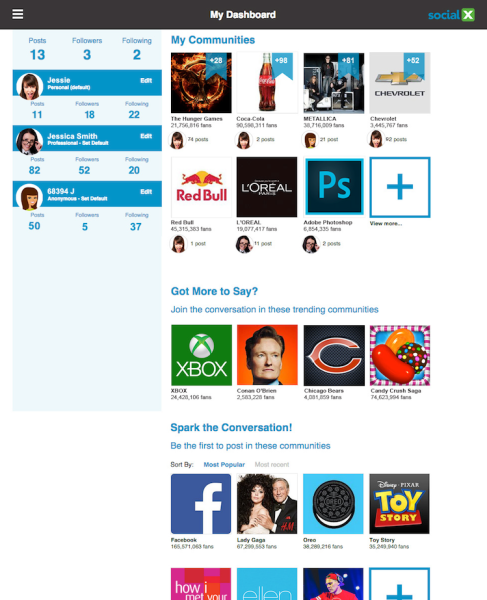 Above: A mockup Social X screen

By allowing anonymous or fictional selves, Social X wants to offer brands a space where their customers can honestly communicate. And that’s the business model for the offering, where brands will pay “as little as $5 a month” for unvarnished groups of 11 to 500 people.

Virtual Artifacts sees Social X as a “micro-social network around Facebook,” a kind of secret society where users can speak truth to power — in this case brand power or other users in a group — and brands can hear the hard facts. The brand-facing version of this platform — Social X Community CRM — echoes the company’s perspective that this is a new way to relate to customers.

But the design and tools are rudimentary, with no messaging between users, no sharing of posts, and no critical mass of users to start. The company said it has shown the environment to some brands, but there’s been no pilot phase that created a community of users to build on.

One innovation of Social X is actually a return to the old days — there’s no tracking whatsoever of users. More services may start making a competitive advantage out of not having every one of your actions, non-actions, or hesitations turned into fuel for analytics engines designed to track you down. And there are no ads.

But the anonymity factor has unleashed in more than a few humans their inner beasts, trolling and flaming without fear of damaging their real selves. Dobey said users’ accounts will be shut down when there are sufficient complaints.

Anonymity as an angle is also being tried by a social network called Social Number, whose motto similarly happens to be “Express yourself, freely!” Ello has attracted attention for allowing users to sign up with fake names. And then there are such anonymous social apps as Whisper, Secret, and Yik Yak.

Morris said that Social X is different, because it is helps make Facebook more expressive by adding a kind of multiple-identity layer — and it lets all those shy users say what they really want to say to Victoria’s Secret.