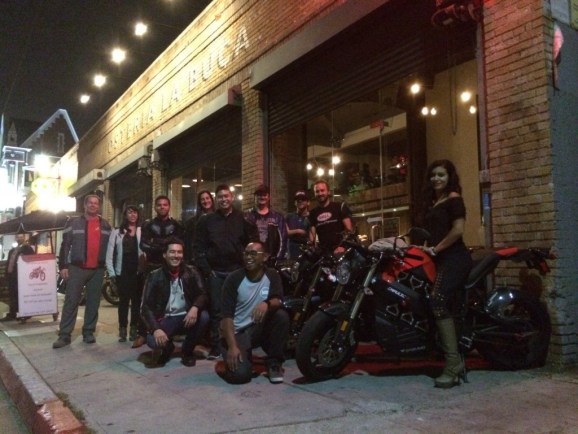 A gathering of electric motorcycle riders.

Bikers are pack animals by nature.

They like to ride in groups and enjoy the open road with a few friends. Biker gangs are well known to ride together wearing the same leathers. Group rides for charity are common in the summer and fall riding seasons. Clubs form around brand names and styles of bikes alike.

Are there now groups of electric motorcycle riders tearing up the streets?  Is it possible to have a group ride?

If you live in Los Angeles, the answer is yes.

Hollywood Electrics has been running group rides through the canyons north of LA every month for a while now. They generally have more than 10 electric motorcycles along for the ride, touring nearby scenic roads and then ending up at a restaurant that uses an electric motorcycle for deliveries.

What’s it like riding with a dozen or so electric motorcycles?

Well, you can have a conversation at any stoplight.

You get to see wild animals on the side of the road that normally would have fled due to the noise of loud pipes.

You don’t smell any fumes from the bikes in front of you.

You get smiles and stares (and sometimes questions) from people nearby whose ears aren’t offended by your engine noise.

You get to enjoy riding with all of the benefits of riding a powerful motorcycle safely in a group without any of the smell or noise associated with gasoline-powered bikes.

That isn’t to say that gasoline bikes aren’t allowed. Friends of people who ride electric motorcycles sometimes still ride them. And they’re welcome to join the ride and tag along–but their riders had better be prepared for some good-natured ribbing about the fumes they make and the noise that stifles conversation.

But bikers are bikers, regardless of electric or gas power; if you can ride, you’re welcome to join a group of people enjoying a two-wheeled ride through the canyons.

If you’re familiar with electric vehicles, you already know that range is limited and recharging time can be considerable.

Electric motorcycles have these limitations too, so long-distance journeys are still rare.

To charge up, each of these bikers stopped for 30 minutes to 1.5 hours to recharge at Level 2 charging stations or RV parks.

This means that riding 400 miles in a day is possible, but it takes considerably longer than on a gas bike due to charging times. In fact, Terry Hershner recently joined the Iron Butt Association by riding 1,047 miles in 22 hours and 57 minutes.

I’ve gone on a few rides with friends who ride gas bikes, and it required some extra planning and time.

First I rode to a charging station near the fun roads we planned on riding that day. Then I charged up for about an hour with external chargers on my bike and my friends arrived when I was finished charging.

We rode for an hour and a half around Harriman State Park north of New York City, then finished back at the charging station in a little town nearby. We had lunch together while my bike charged again, and then we rode home. Total mileage together was a little over 100 miles.

The range on electric motorcycles has increased every year, such that a full battery will get you about as far as a tank of gas on many bikes.

However, the recharge time is still the bottleneck. As soon as sites with CHAdeMO or CCS DC fast charging can be used with electric motorcycles, it will be possible for many more people to take longer electric road trips.

For electric motorcycles to have the ability to go on long road trips with gas bikes–400 or more miles per day–there are several potential futures.

Battery technology could advance to the point where we have 10 times the energy density that we currently have. That would provide a 1,000 mile battery, making it unnecessary to charge during the day.

Faster charging would allow batteries to be charged as fast as gas bikes are filled up. For example, if a 15-kWh battery on a 2015 Zero S could use a Tesla Supercharger at 135kW to charge, it would take only about 7 minutes.

Multiple chargers, like those fitted to Terry Hershner’s bike, would allow the rider to plug two (or more) Level 2 chargers into their bike at the same time. Combined with higher battery capacity, this is a reasonable solution for the near future while we await any technological breakthroughs.

In the end, electric motorcycles are amazing to ride: Just ask anyone who has gone for a test ride.

But if you want to take a road trip, you will need to put a few extra dollars into your own faster charging system to take along for the ride–and bring a good book to read too.

And, by the way, if you see a “gang” of electric bikers … you may find them among the kindest and most considerate group of people you will meet.