The video game industry in Poland is fast becoming one of the most respected and prolific in Europe. GamesBeat spent a week visiting some of the game development and film studios making a worldwide name for themselves. You can read the stories that came out of our visit here. The Polish government paid for Daniel Crawley’s trip. Our coverage remains objective.

Sometimes a game announcement prompts such a visceral reaction that it’s impossible to ignore.

I was having lunch in a Warsaw restaurant when I first heard about Hatred, a game that graphically portrays the genocidal rampage of a psychopath, who kills brutally and indiscriminately. It’s a game from a small Polish developer, Destructive Creations. The trailer shocked me, as it did the translator that accompanied me, who was himself an avid gamer. We weren’t alone, judging by the ferocity of the media and forum response to the trailer, both condoning and supporting Hatred.

According to the developers, Hatred is a response to political correctness in gaming. “These days, when a lot of games are heading to be polite, colorful, politically correct and trying to be some kind of higher art, rather than just an entertainment — we wanted to create something against trends,” read the initial press release. “Something different, something that could give the player a pure, gaming pleasure.“

Digging into the short history of Destructive Creations revealed that the team all previously worked at The Farm 51, based in the same town of Gliwice. By chance, I was due to meet Wojciech Pazdur, director of development at The Farm 51, the next day, and I took the opportunity to ask his thoughts on Hatred.

A waste of talent

Pazdur confirmed that the team at Destructive Creations was working with him until about six months ago. “Some of them left because they wanted to do stuff like this,” he said. “Or, at least, it was one of their ideas. I strongly pushed to go, for example, with [upcoming first-person action game] Get Even, which is still a quite brutal game. There is shooting, there is killing.”

But not on the same level as Hatred, which seems wholly indiscriminate with the brutality it dispenses. It’s a game that Pazdur thinks is bad for the industry.

“I don’t really like their game right now,” said Pazdur. “Not even the brutality itself, but for me, the way the brutality is used. … And it gives a lot of ammo to people who want to attack the gaming industry for being brutal.”

For Pazdur, violence and brutality is justified in games, but not when included for their own sake.

“I always personally believe that a game needs to mean something,” he told me. “Brutality can be included, but it has to be used, for example, to tell the story. There is nothing else than brutality [in Hatred]. It’s not justified in any way. It’s not telling a story.” 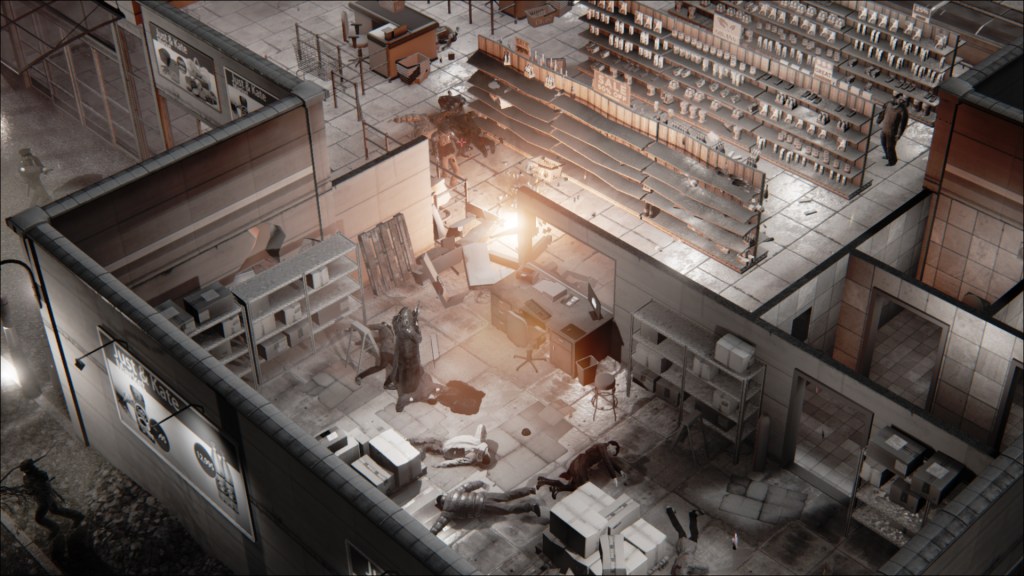 Above: The killing spree that is Hatred.

But the gaming press is guilty of a certain level of hypocrisy when denouncing the violence on show in Hatred, he says. Critically acclaimed titles like Grand Theft Auto also let the player attack random strangers and wreak havoc across a realistic city.

I wasn’t, I pointed out, and I would generally try to avoid pulling people out of cars and committing random acts of violence. I didn’t always pull this off, but I tried to go through GTA without being a brutal killer.

“When you are playing GTA and you feel bad pulling somebody out of a car, that means that this game touches some aspects of your humanity,” said Pazdur.  “I would say it can be somehow justified.”

“Even if you know that many other people will just find fun tormenting all these people. If it gives you this kind of feeling, it means it can touch some of your emotions and make you think. But I never believe that a game like Hatred may make anybody think about this aspect that you have just touched.“

So does he believe there’s actually a market for a game like Hatred?

“Unfortunately, I’m afraid there is a market for this game,” Pazdur said. “Even if I would prefer not.” 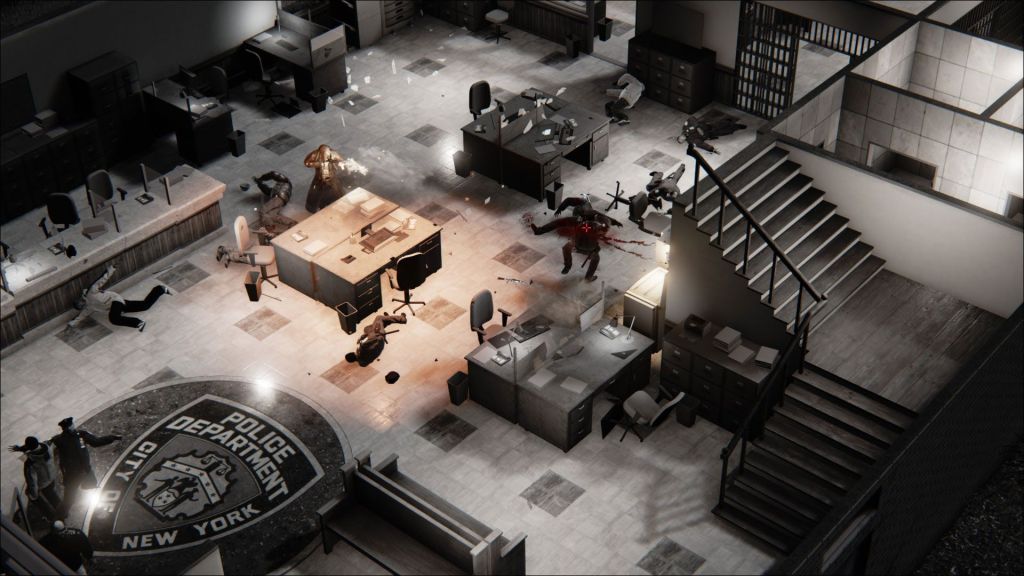 The fact that the Destructive Creations team is making Hatred actually saddens Pazdur because he thinks it could do better.

“I know these are skilled people and they are wasting a lot of time,” he said. “Personally, I feel sorry for them because I know they could do much better things.”

He pointed to some of the great projects in development in Poland right now, like role-playing games The Witcher 3 and Cyberpunk 2077 and zombie action game Dying Light.

“There’s a lot of really great stuff that you can do [in Poland], and for me, [Hatred is] just like a cheap jump for the money, justified with showing that, ‘We’re rebels. We are fighting against political correctness,’” Pazdur said.

While’s not a fan of political correctness either, Pazdur doesn’t believe that’s actually Destruction Creations’ true motivation. “I really believe it’s simply getting controversy for really cheap marketing,” he said. “That’s why I’m distanced from this and I would rather not buy this game, and I would rather not recommend buying it for anyone.”

And he’s not convinced that Hatred will actually make it to market, at least in its present form.

“I’m really curious if they will manage to push it through Steam,” he told me. “Personally, I feel that they might simply try to lower this [brutality]. They might change the course of the game when they see that they will never release it — they will simply change it. Like, they will add more story, they will justify it, they will remove some brutality, and for me, again, it will be a sign of not being honest. That will just make a game that is not so shocking, but it won’t be a really great game, in my opinion.”

“Personally, for most of these guys, I wish them best luck,” said Pazdur. “But not with this game.”

A critique on shitty games?

Karol Zajaczkowski is a PR specialist. Previously, he worked at CD Projekt Red, Poland’s premier game studio. He’s now based at 11 Bit Studios, the team behind downbeat strategy game This War of Mine. I talked to him about Hatred, and he gave me his personal take on the controversial game.

Like Pazdur, he feels the ultraviolence in Hatred needs justifying with some kind of story, which it clearly isn’t.

“I see no reason for that because you just kill innocent people,” he said. “It’s all that is there. There’s nothing else in that game. Here, the guy just walks out of his home and just starts shooting people. Especially those finishers, they’re just totally unnecessary. Maybe I’m too old, but I mean, I feel personally bad about it because there’s something inside me that says that it’s bad.”

Zajaczkowski doesn’t buy the argument that Hatred is a protest against the current state of gaming — the line that Hatred’s developers and supporters have stuck to. “I’m open to have a discussion about violence in a game,” he said, “but there are ways to do that, and that’s not one of them, to be honest. If you think that games are shitty then make a good game.”

He also questioned the psychological well-being of someone who would want to make a game like Hatred: “I wouldn’t want to make an animation where I shoot a defenseless woman in the head because it’s wrong, and if there’s people doing that then I just [wonder] if they’re OK.”

But he isn’t worried about the game’s impact on the thriving development scene in Poland: “In general I believe that the industry [in Poland] will defend itself because we will make a lot of good games.” 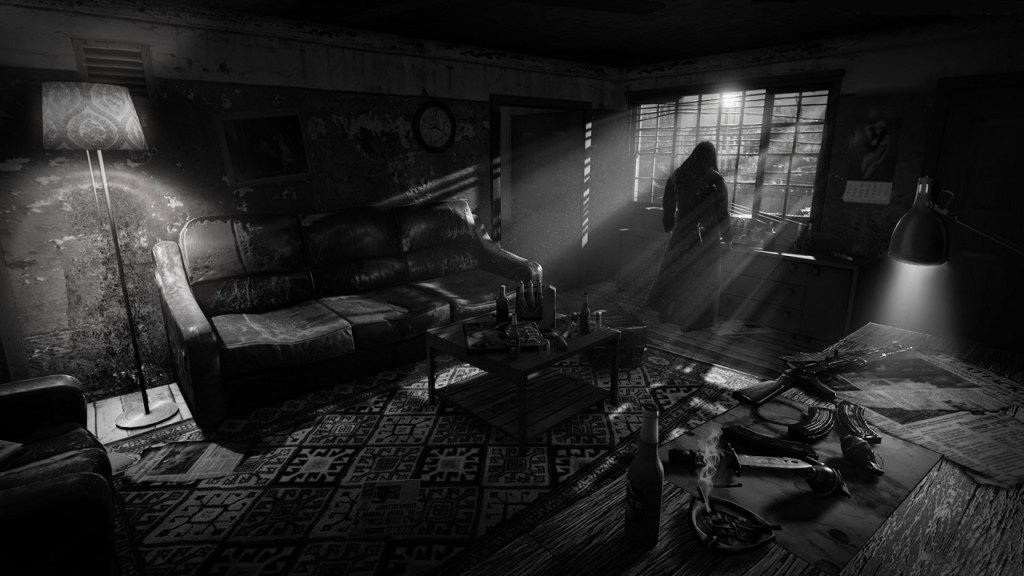 Above: Hatred’s protagonist is “full of hatred for humanity.”

I contacted Jarosław Zieliński, the chief executive officer at Destructive Creations, to put some of these criticisms of Hatred to him. He was interested to hear the thoughts of his former employer at The Farm 51, but he didn’t agree that the team left in order to pursue more brutal projects.

“No, that’s certainly not true,” he told me via email. “We left because we were unhappy with the management.”

Zieliński also denied that the team was wasting its time on Hatred. “We’re making a good quality game and we exploit our skills to the max,” he said, “while they were wasted in the past. Especially [now] that it looks like our game has a potential to sell pretty nicely.”

A lot of that sales potential comes from the “shitstorm” that Hatred’s trailer created, according to Zieliński.

“We knew that our reveal will cause some shitstorm, but never expected it to be so huge,” he said five days after the trailer launched, posting on the Destruction Creations website. “We wish to thank all of our haters and all upset press for a great marketing campaign they’ve done for us. A week ago, we were a little company from the middle of nowhere, just some guys making some game. Today everyone heard about ‘Hatred’ and us.” 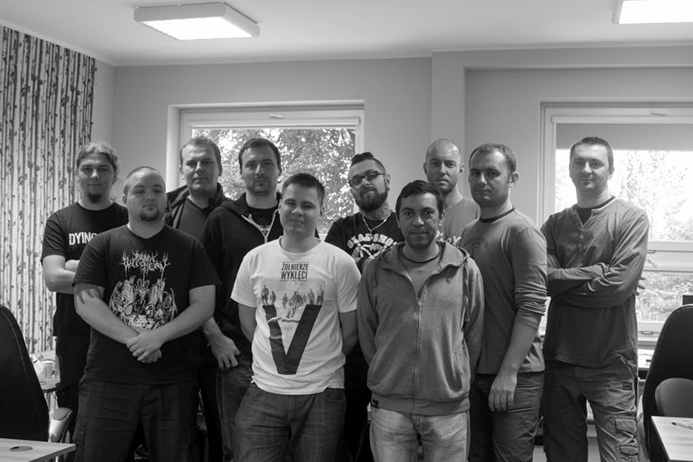 Above: The development team at Destructive Creations. Jarosław Zieliński is second from the left.

So was the trailer designed to deliberately court controversy, as Pazdur suggests? No, says Zieliński. “He [Pazdur] should remember that I always wanted to do something like this as we were quite [good] friends in the past, and cheap publicity wasn’t the reason,” he said. “It’s not about pushing the boundaries, it’s about making something we want, without any hesitation and without listening to all those complainers.”

He denied that Desctructive Creations will make changes to Hatred if it fails to get on Steam, the largest digital game distributor in the gaming world.

“No, we won’t change anything. Our fans would kill us,” he said, explaining that other similar games, such as the psychological horror titles Manhunt and Postal, are already on Steam. “The truth is that our game isn’t any more brutal than many others. It’s just the setting that people get crazy about. Sometimes I think we will get an ‘M’ rating because there are not excessive violence scenes in Hatred like those in Manhunt.

If Hatred does fail to get onto Steam, Zieliński said that Destructive Creations has some “backup plans.”

Zieliński insisted that his game isn’t just about killing innocent people despite that it doesn’t justify the main characters’ deeds by “talking about his past and other stuff like this.”

“If you’ll think about it, it’s actually more moral than justifying mass murdering by greed for money or treasure hunting, isn’t it?” he said.

I asked Zieliński about Karol Zajaczkowski’s concern for an animator that is happy to create a scene where a defenseless woman is shot in the head.

“Now this is really awkward,” he said. “Actually, I’m animating everything on male models, and I’m happy it is suggestive enough for people to feel uncomfortable watching it because it’s the proper reaction for such scenes in reality. By the way — what is the difference if it’s male or female model? For me there’s none; it’s a virtual character and for [an] animator it doesn’t matter if it’s a girl or a spaghetti monster.“

“Karol is a PR specialist, and he should talk about things he’s familiar with,” he added.

And despite the huge wave of controversy that surrounds Hatred, Zieliński is adamant that it won’t affect the reputation of the game industry in Poland.

“Did any controversial game reflected badly to any country’s industry in general? Nope.”