You don’t hire a swimsuit model as a spokesperson and then run a modest ad campaign. And Machine Zone’s Game of War television ads starring Kate Upton are definitely not modest.

The developer has already aired the TV ad starring the Sports Illustrated cover model more than 200 times since it debuted during Thursday Night Football on the NFL Network last week. And Machine Zone has already spent more than $4.5 million of its $40 million budget to promote its mobile strategy game, according to data provided to GamesBeat by iSpot.tv, which tracks TV commercials live as they happen. Unsurprisingly, Machine Zone is aiming this ad at networks and television shows that have significant male audiences. This should help Game of War, the No. 3 highest-grossing iOS app, continue getting a piece of the $21 billion mobile industry

The Game of War commercial has appeared most during college football games and ESPN’s news show SportsCenter, but Machine Zone has spent the most to get the commercial on during NFL games. Of the $4.5 million spent so far, $2 million of that is just for ads during pro football. Another $500,000 is for college football.

ISpot.tv also tracks the online social actions that people make following an ads airing, and the company found that football audiences had the biggest response to Upton’s strut through an ancient battlefield. But Machine Zone also get a significant reaction from the viewers of a program called Against All Odds that documents people performing heroic actions in the face of mortal danger.

In the first few days of its airing, the Upton ad prompted more than 62,000 searches for Game of War.

Other shows the ad appeared on include WWE Friday Night SmackDown and reruns of Star Trek. BBC America, ESPN, and the Science Channel hosted the most airings of the commercial in that order. 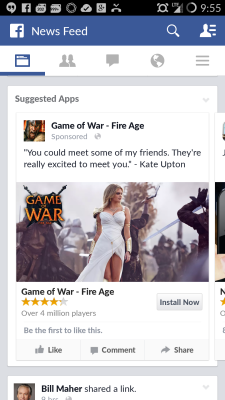 Above: You’re likely going to start seeing Kate Upton dressed up as Athena in an ad for Game of War on Facebook.

Machine Zone isn’t alone on spending millions of dollars on television marketing. Candy Crush Saga publisher King and Clash of Clans developer SuperCell both spend more than that advertising their games over the air. But developers typically aren’t expecting you to see an ad for a game and to pick up your smartphone and tablet and download it while you are on the couch. Instead, these campaigns are all about brand awareness. The idea is to make players more aware of Game of War so that the next time they see an in-game or Facebook ad for it, they are more likely to go through and download it.

It’s a roundabout strategy, but it’s working for Clash of Clans, Candy Crush Saga, and, now, Game of War, which all inhabit the top five on the highest-grossing chart on both iOS’s App Store and Android’s Google Play.