I found myself wishing as I worked on my character that more of those areas were available to lower-level players. You can only play half of these eight before level 100, so you can go several levels without seeing a new dungeon. It does encourage players to spend their time in the excellent questlines, instead of running dungeons over and over again to level, and those you do get to see are generally top-notch. 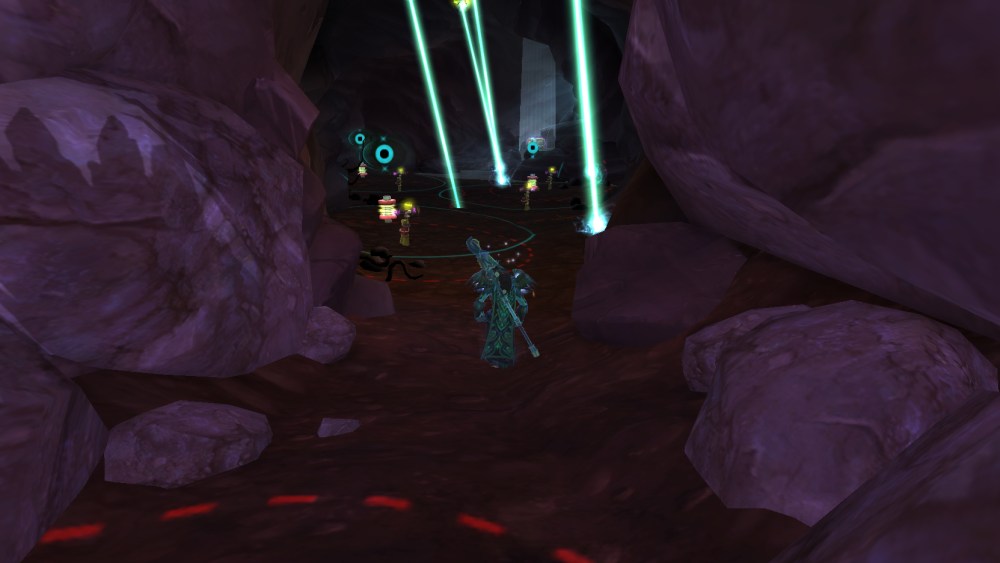 Above: This treasure is in a cave, and it requires navigating laser beams, turrets that slow you, and items that zap you if you get too close.

Treasures for the taking

The Mists of Pandaria expansion pack introduced the concept of treasures, objects you could snag on the ground, and the Warlords expansion takes this much further. Every zone has dozens of these items, and getting to some of them is a minigame in itself, with jumping puzzles and the like.

One memorable cave [above] forces you to navigate deadly lasers and turrets and totems that slow you down. It’s a ton of fun, gives a lot of experience points to players that are still leveling, and provides a pile of useful and lighthearted items. The treasure challenge in that cave rewards a mechanical pet. 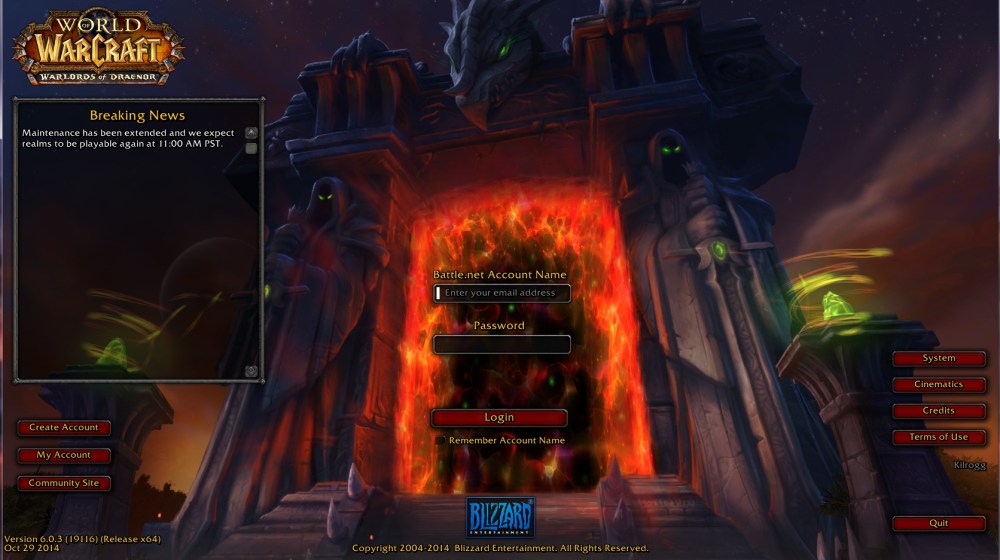 Above: Draenor players were stuck with this far too often the first few days: A nonfunctional login screen.

Blizzard recently offered players five days of free play time (and an apology) for the issues that have made it difficult for people to fully experience the expansion. It’s hard to get settled into the groove of Draenor when the servers are hanging up every hour or two or bugged questlines fail to complete, standing in the way of progress through a zone.

Some of that is beyond the company’s control; at launch, servers were the target of a dedicated denial of service (DDoS) attack. But some of it was poor design, bottlenecking millions of players at the same points in the same zones at the same time. This is WoW’s fifth expansion; at this point, the company knows what launch day looks like. Queues aren’t fun, but they’re reasonable. Players having issues once they’re in is something else altogether.

Those issues have been gradually settling out, and a massive change to the way realms are run helped smooth things considerably over the weekend. But even last night, servers were still having some lags and delays, and lines for dungeons were up to an hour long for players of damage classes due in part to the reduced number of people allowed on per server. 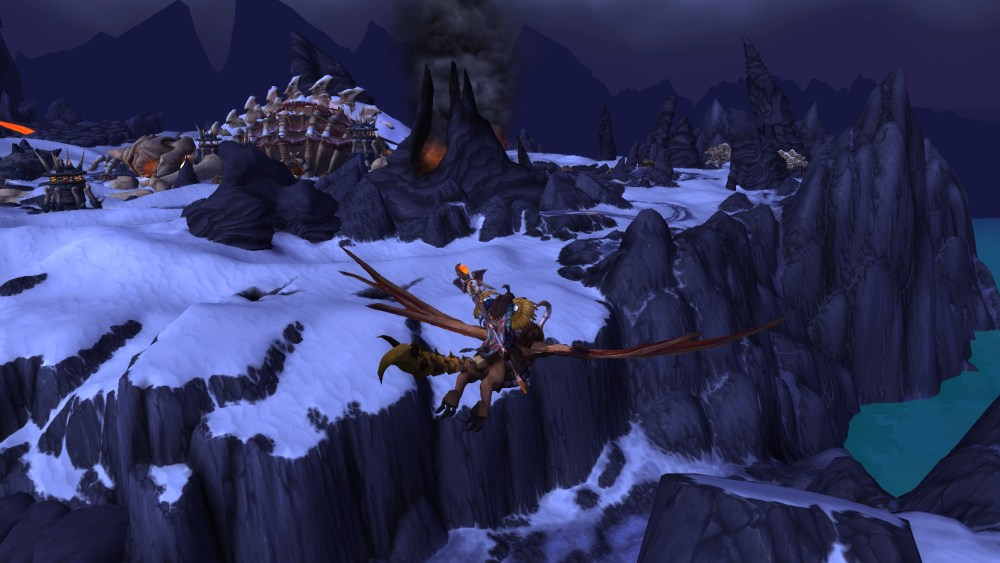 The bones of the Draenor zones are based on the continent of Outland from The Burning Crusade, WoW’s second expansion pack. Outland was the exploded-in-space version of Draenor, a wasteland that had been created from Draenor’s lush landscapes, so it’s fun to occasionally have a moment of déjà vu when you realize what you’re looking at is something you once played across in a very different form.

Some of the eight zones are quite lovely. Gorgrond’s jungles and deserts are particularly striking, and the dark, gloomy forest-and-swamp ambiance of Spires of Arak is a nice contrast. Ashran is an island home to both the current player hubs (where characters do their banking, or change the look of their gear) and an outdoor, always-on player versus player zone. 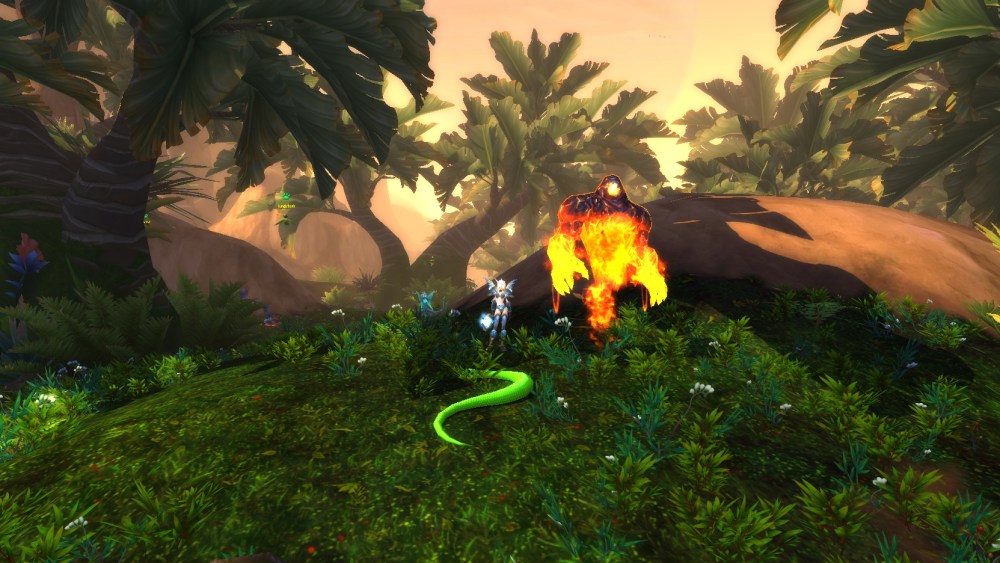 Above: Pausing for a moment (with the Forge Guardian players can get from a second-level Forge garrison building) in the trees of Gorgrond.

But some landscapes just feel … old. I’m extremely envious of the beautiful Shadowmoon Valley, the lush starlit landscape that Alliance players start with (see GamesBeat community manager Mike Minotti’s take on that at the end of this review).

The Horde gets Frostfire Ridge, a hash, unforgiving landscape composed entirely of snow, black rock, and magma. Sigh. Suitable for the faction, I suppose, but we’ve had just this look in other snowy zones, including Storm Peaks in The Wrath of the Lich King expansion. And Talador feels like just another grass-and-stone Elwynn Forest, the Alliance zone for level 1-10 characters. 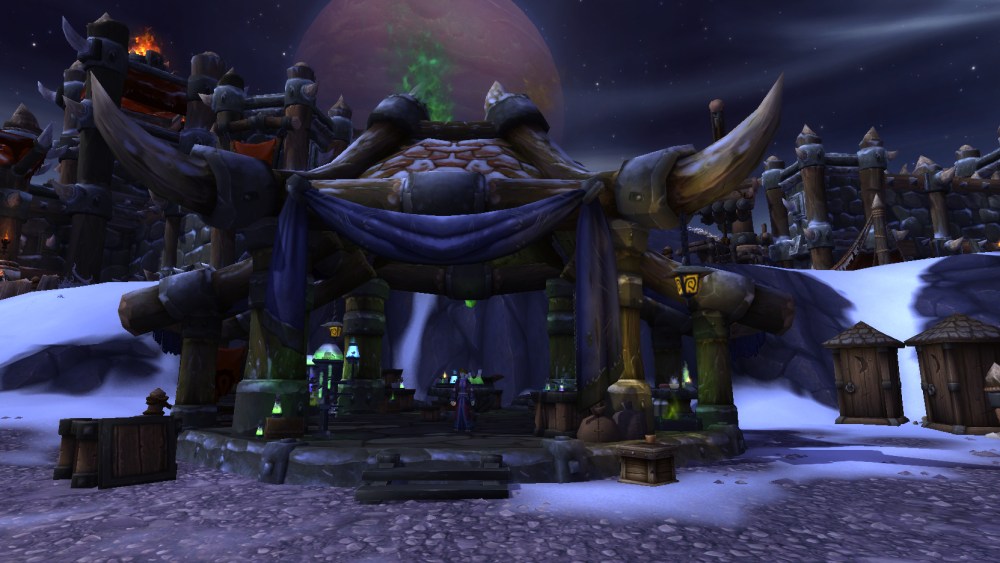 Above: The Alchemy building in your garrison: almost as rewarding as actually having the alchemy tradeskill, with little of the work.

Blacksmithing, leatherworking, tailoring, and the like — tradeskills — got a dramatic revamp for Warlords, with all activity now centering on the profession buildings in the garrison. That’s where you’ll get your new patterns, where you’ll create the rare crafting materials you need to make them, and where you’ll place followers to help you.

But at this point, all patterns are available to anyone of any skill. The only incentive to level a tradeskill higher is that you’ll get more of the materials you need to make things. Useful, to be sure, but not exciting.

Cooking creates great food; but the very best food for adding character power for raid dungeons comes from a different garrison building, not a profession. All but the best patterns are available to players if they build the proper building, regardless of their tradeskills. This is the first expansion where I haven’t been working on maxing out skills right away.

Warlords of Draenor is, simply put, the biggest change to World of Warcraft since it debuted in 2004. Player abilities, tradeskills, questing, dungeons, graphics — all have received a dramatic overhaul, with your character plopped down in the center of it. Not all the changes were perfectly executed, and lingering problems mar the play experience. But this is a tremendous start to the new expansion, and just the kick in the pants this game needed after 10 years on the streets. 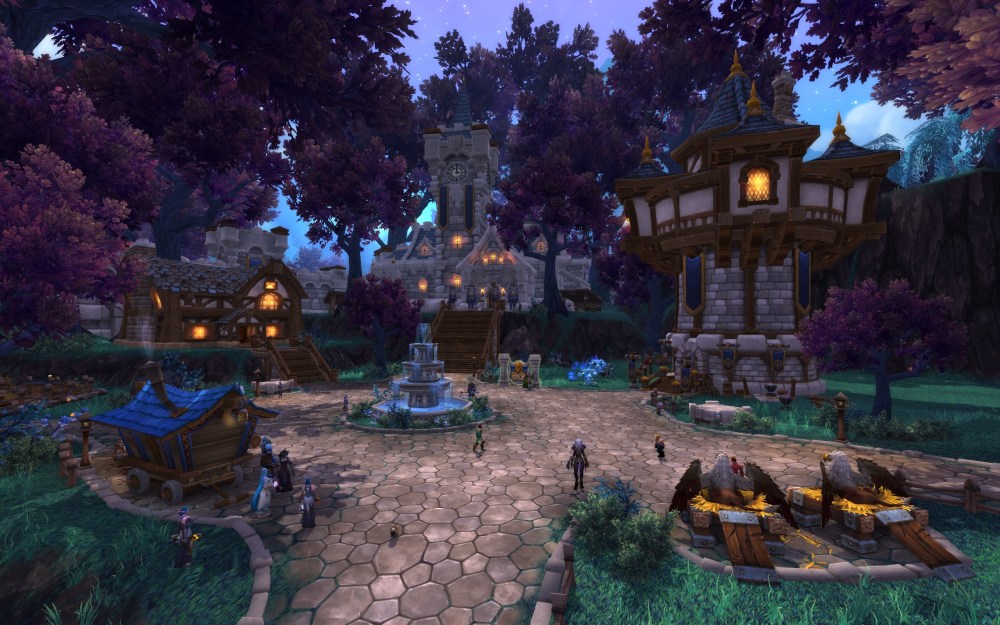 Above: A fully upgraded Alliance garrison — where the high and mighty hang out.

A second opinion (from an Alliance player)

Thank you, representative of the master Horde race, for permitting me to express my opinion as well. As an Alliance player (I was levelling a Death Knight Draenei), my experience was pretty similar to Heather’s, although my quests were a bit different and featured a separate cast of characters. Instead of focusing on the Orcs who didn’t join the Iron Horde, I fought alongside the Draenei, the other powerful race native to Draenor.

The quest lines I completed were fun and engaging, and they were certainly more memorable than the ones I experienced in Mists of Pandaria. Warlords of Draenor does a great job of establishing its villains, and everything you do revolves around your battle to stop them. Completing quests is just as much about about progressing the expansion’s story as it is a means to earn experience points.

Besides that, I pretty much agree with Heather regarding the expansion’s quality. The garrison mechanic really is great, and it brings back a little bit of that city-building quality that I loved in the original Warcraft games. I also enjoyed some of the changes made to my class. Extraneous skills are gone or combined with others, so my action bar is a bit less cluttered. Also, I’m playing on a relatively small realm, so those staggering server issues haven’t bothered me too much.

So, assuming you can get in, this is definitely one of World of Warcraft’s better expansions.

World of Warcraft: Warlords of Draenor is available now for PC and Mac, and it requires the base World of Warcraft game to run. The publisher provided download codes to GamesBeat for the purposes of this review.