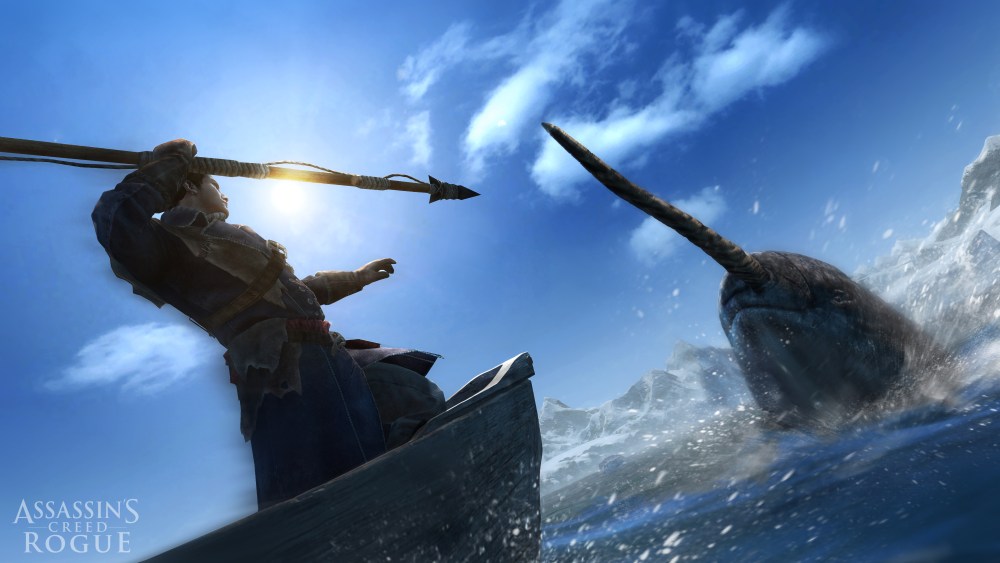 Above: Shay can hunt narwhals, whales, and sharks.

It’s too similar to AC4

Rogue is almost a carbon-copy of Black Flag. The world isn’t as huge or open as Black Flag’s Caribbean sea, some of the animations are the same (Shay kicks treasure chests and reloads his guns just like Edward did), and you go through the same upgrading system for your ship as before. The latter was the most tiresome, as I already did that two times with Black Flag and its standalone downloadable content, Freedom Cry.

Rogue also doesn’t have a multiplayer mode, so if you liked that aspect of the older games, that may affect if you decide to play this. I never really cared for it in the first place, so I didn’t miss it at all.

Sometimes, I just wanted to tell Shay to shut his mouth. The Irish Templar is a cool character overall, but whenever someone says the word “luck” in front of him, he never fails to utter his life motto: “I make my own luck!” He said this at least half a dozen times. Either he’s insecure, or the writers are just playing some kind of cruel joke on us.

Some bugs here and there

Rogue is a technically solid, but a few bugs did bother me. During what was supposed to be an emotional cutscene early on, dialogue and sound effects were way ahead of the action onscreen (I had to reload back to the last checkpoint to watch it properly). In two instances, Shay got stuck in mid-air while his falling animation looped over and over — he eventually fell to the ground the first time, but I had to restart my PS3 after the second infraction. And at one point, Rogue completely froze during a chase sequence. 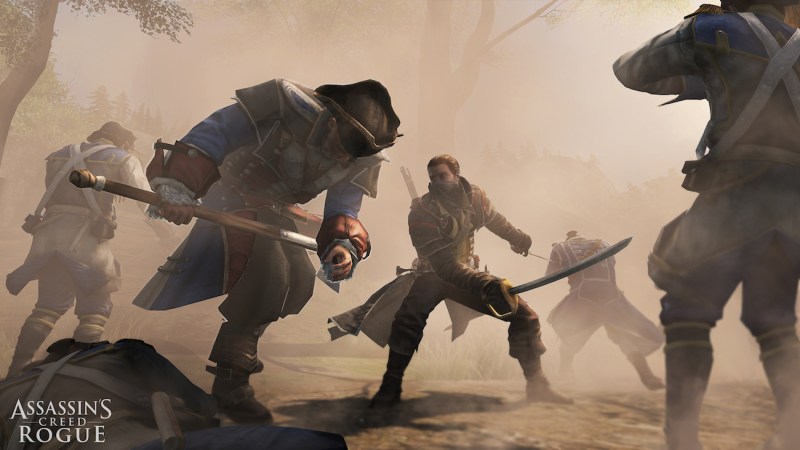 Above: With his gas mask on, Shay kind of looks like Aiden Pearce from Ubisoft's Watch Dogs.

After playing so many AC games, a lot of the basics feel like muscle memory to me: “OK, I gotta climb this tower to reveal the rest of the map. I have to swing through the trees to get that Animus fragment.” It’s so automatic that each game I play feels less like a new experience and more like … work. A routine. And the new stuff in Rogue isn’t enough to break away from that rut.

Yet I still find myself drawn to the Assassin’s Creed mythos and the time periods it uses to tell that story. I know the plot is absurdly convoluted and the way Ubisoft continues to insert itself as a character in that world (you can see copies of Far Cry 3 and Splinter Cell in the modern-day levels) still has me scratching my head. But dammit, I need to know what happens next. The events of Rogue lead directly into Assassin’s Creed: Unity, too, so now I all want to do is just play that.

If you’re an experienced AC player, here’s my advice: Rogue feels like a good expansion, and it’s worth seeing Shay’s role in the ongoing drama. But because it’s so similar to Black Flag, I think you’re better off waiting for a price drop. If you’re new to the series, you should pick up Black Flag first; not only is it cheaper, but the story there is easier to understand for newcomers, and you get more out of it.

Assassin’s Creed: Rogue is out now for PlayStation 3 and Xbox 360. GamesBeat bought a PS3 copy of the game for the purpose of this review.