Climbing the Hyperion corporate ladder will be tough — the long hours, the bad pay, the constant threat of evisceration. Searching the world of Pandora for treasure without having your skull turned into a cereal bowl by Psychos will be even tougher.

Zero Sum — the first episode of Gearbox Software and Telltale Games’ latest five-part epic Tales from the Borderlands — asks players to accomplish all of this and more.

Players assume the role of two main characters in Zero Sum: Rhys, a pencil-pushing grunt for Borderlands’ evil Hyperion Corporation; and Fiona, an archetypal thief with a checkered pass, a kid sister to look out for and a stylish bowler hat.

Neither one of these antihero characters is particularly interesting, but — as is so often the case with the Borderlands franchise and Telltale’s graphic adventures — it’s the interactions with a colorful cast of supporting characters and a terrific script that win the day for Zero Sum. 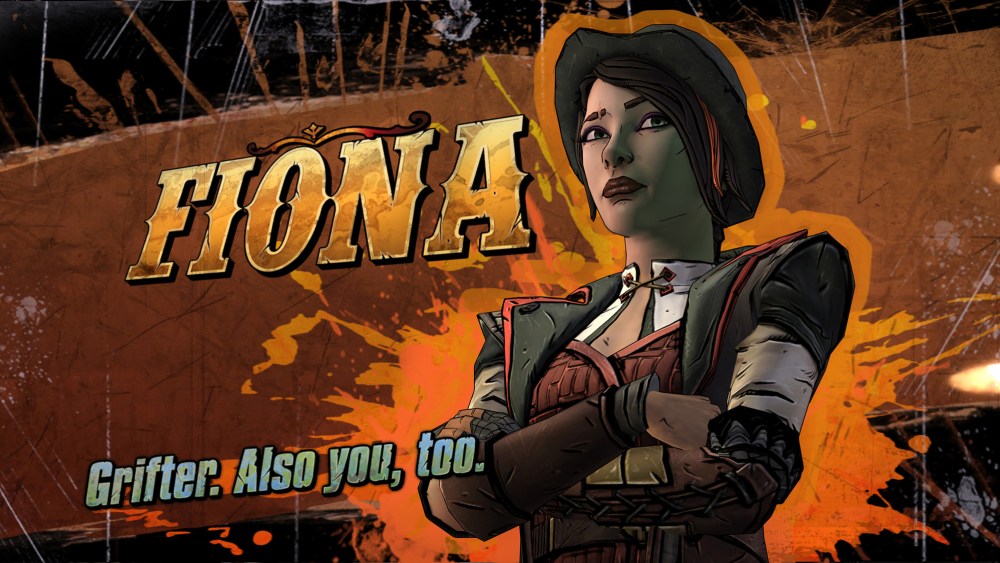 A dazzling cast of new faces

My favorite part of Zero Sum was definitely my own shock at just how funny and interesting a cast of completely new characters could be. I thought the well of hilarious Borderlands characters had run dry after staples like Claptrap, Steve the Bandit, and my all-time favorite video game bad guy, Handsome Jack.

The introductory episode’s cast is solid on all fronts. Patrick Warburton brings his typical larger-than-life vocal swagger to Vasquez, the antagonist. Chris Hardwick breathes life into meek sidekick Vaughn, and Laura Bailey and Erin Yvette do a decent job of moving the only lackluster part of Zero Sum’s script forward as sisters Fiona and Sasha.

However, the star of Zero Sum is without a doubt a humble Loaderbot. I don’t know which genius in the development staff decided to perfectly personify one of the most boring creatures in the Borderlands franchise and insert him into Tales from the Borderlands as a supporting character, but that person deserves a shiny gold star on the Telltale performance chart.

Loaderbot assails the player with gut-splitting pop culture references as he single-handedly saves the main characters’ asses. Loaderbot is only a part of Zero Sum, but the machine steals the show immediately and never lets it go. If I would have known the capacity of these robots, I never would have killed hundreds of thousands of them in the fields of Pandora. I can’t wait to see what Gearbox and Telltale choose to do with this character.

The only misstep in casting was Troy Baker as Rhys, the main character who is actually closer to being Dilbert than his beloved mentor Handsome Jack. The role is a departure for Baker, who plays it admirably, but I can’t shake his many blockbuster personas when I hear his dialogue. It sounds like Jack Mitchell, Joel, or Booker DeWitt is suddenly a Hyperion corporate worm, and I am not into it.

Zero Sum takes the type of interactive, engaging storyline that Telltale Games is known for with franchises like the Walking Dead and The Wolf Among Us and seamlessly mixes it with all things Borderlands.

At no point during my roughly two-hour playthrough did I not feel as if I was playing both an authentic Borderlands sequel and a Telltale point-and-click episodic drama.

It has the absolute best of both, and I was fully engaged in the two diametrically opposed storylines. I cared about the characters and couldn’t wait to see what would happen next as I breezed through the story in one sitting.

The quick-time events and point-and-click moments are simple but meaningful, and I believe Zero Sum is an excellent candidate for enjoying alongside friends. Gather some of your buddies, pass the controller around, and enjoy the laughs together.

Make sure you fail some of those death-defying quick-time events. I need you to trust me on this. The main-character death scenes are so morbidly hilarious that you need to experience at least one. 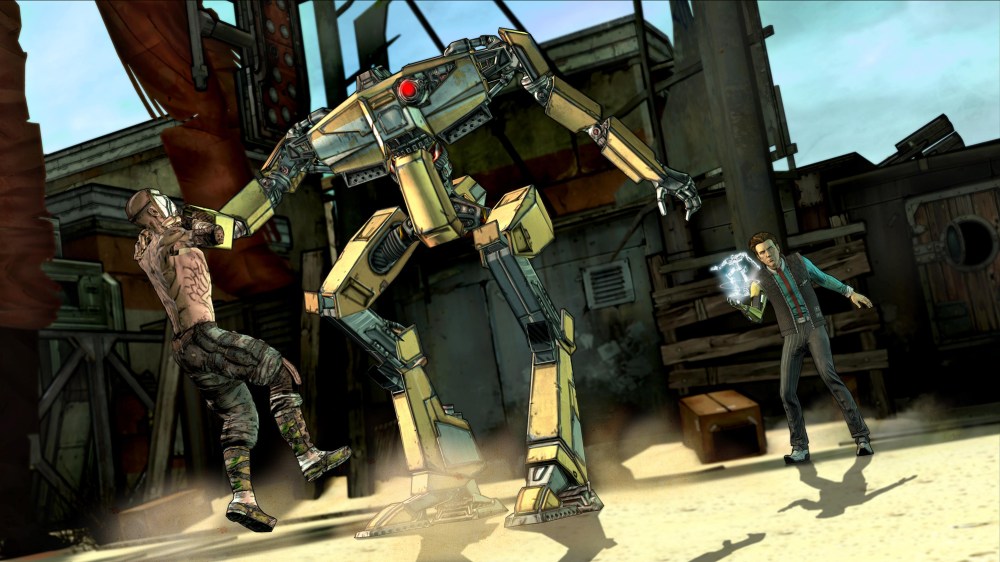 Above: Never underestimate the power of your Loaderbot.

Tremendous synergy between the two storylines

Tales from the Borderlands’ first installment features two main characters both trying to cheat each other. Rhys is trying to get ahead by suckering Fiona, and vice-versa.

I usually hate games with this type of dynamic. Invariably, I feel as if I have to choose which character will succeed at the expense of the other, or I am flip-flopping roles so much that I never get truly invested in either character.

I am not sure how they did it, but Zero Sum’s creators managed to bypass all of these booby traps and get me firmly interested in both storylines and — crucially — their entwinement.

As the story progresses, one character starts to feel the weight of the other’s choices. Typically, the same scene is played twice — with each character taking a turn from their point of view. In the second scene playthrough, I heard one of my characters making the choices I had him make and directed the second one to play off of that.

It sounds a little confusing, but I don’t want to go into any more detail for fear of spoiling the fun. Just give it a shot — you won’t be disappointed. 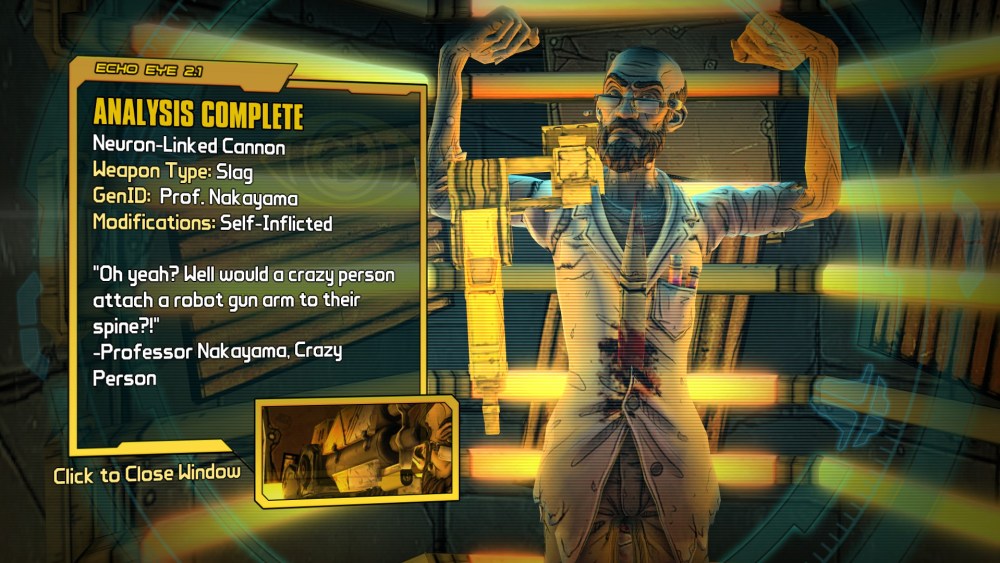 Above: Rhys’ bionic eye can scan your surroundings for more clues — or more jokes.

The characters’ mouths have a mind of their own at times

The only thing that subtracts from the snappy script and great voice acting in Zero Sum is ironically the orifices doing the talking.

Most characters — Vaughn especially — have some audio syncing problems. At times poor Vaughn looks like he the world’s best ventriloquist or starring in a ’70s kung fu movie. The audio plays quite clearly, but his lips either don’t keep up or seem to lose interest entirely.

I wasn’t that bothered by this problem, which I have seen a few times in the previous Telltale franchises. But it is definitely something worth taking into account, especially since you spend much of your time here watching people talk.

A useless and unnecessary loot system

For many gamers, the introduction of a Borderlands-inspired loot system would a positive for an adventure game like Tales from the Borderlands.

Those players will be disappointed. Such a system is virtually non-existent in Zero Sum. Rhys has a few nifty gadgets implanted in his body, but the small amount of money and items gathered throughout the game are worthless.

This isn’t a huge sticking point for me — I’ve always thought that Borderlands’ crazy loot system wasn’t even in the top five of the franchise’s accomplishments. But Telltale promised people loot, and it’s too bad they will have to wait until 2015 to get it. 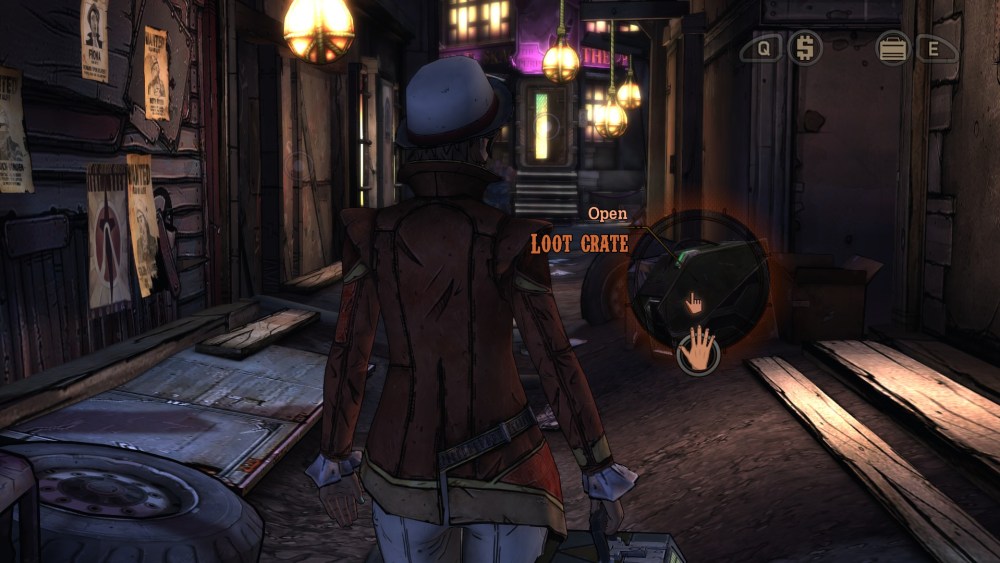 Above: Spoiler alert: It’s empty. Almost all of them are empty.

Tales from the Borderlands’ first episode is a fantastic introduction to what is sure to be an amazing franchise.

Zero Sum stands tall as the ultimate point-and-click science project: combine the beloved Borderlands lore and setting with the shining vision of an artistic studio, crank up the heat, and enjoy.

Tales from the Borderlands Episode 1: Zero Sum is out now for the PC. PlayStation 4, Xbox One, PS3, and Xbox 360 versions are expected soon after. Telltale Games plans to release the PS Vita and iOS versions before the end of 2014. Telltale Games provided GamesBeat with a PC digital download copy of Zero Sum for the purposes of this review.