More specifically, IDC says the worldwide tablet market will see year-over-year growth slowing to 7.2 percent in 2014 (to 235.7 million units), down from a growth of 52.5 percent in 2013. The main cause for this is the expectation that 2014 will represent the first full year of decline in Apple’s iPad shipments.

If you’ve been following tablet figures throughout 2014, this shouldn’t come as a huge shock. Tablet lifecycles are lengthening and increasingly resemble those of PCs rather than of smartphones.

“In the early stages of the tablet market, device lifecycles were expected to resemble those of smartphones, with replacement occurring every 2-3 years,” Ryan Reith, program director at IDC, said in a statement. “What has played out instead is that many tablet owners are holding onto their devices for more than 3 years and in some instances more than 4 years. We believe the two major drivers for longer than expected tablet lifecycles are legacy software support for older products, especially within iOS, and the increased use of smartphones for a variety of computing tasks.”

Meanwhile, worldwide PC shipments are expected to fall by 2.7 percent in 2014 (to 306.7 million units), a slight improvement over the previous forecast of 3.7 percent. IDC notes that while third-quarter results were positive, they were a short-term gain rather than a sign of stronger growth in the long term.

IDC says the improvement was driven by a rebound from last year, as well as short-term factors like building fourth quarter inventory earlier in the year and continuing Windows XP replacement activity. For reference, support for Windows XP ended in April. 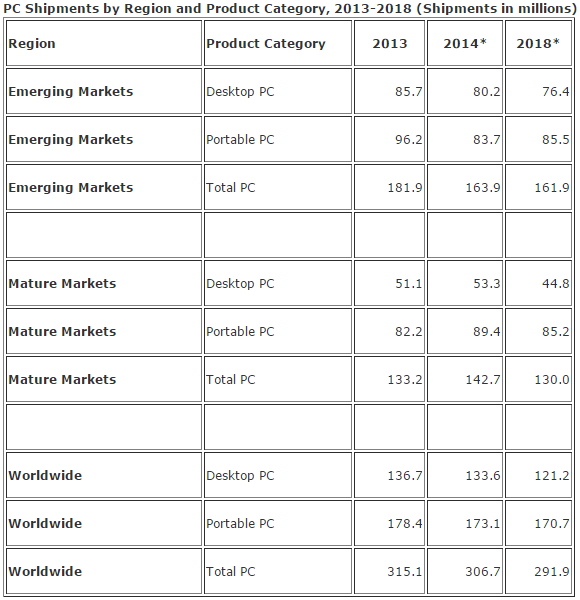 This is largely due to pressure from tablets waning, though IDC says competition for disposable income from smartphones and phablets is rising. Overall, replacements are stabilizing PC shipments but not boosting total volume, limiting the potential for growth.

“The expansion of entry-level models, encouraged by Windows 8 + Bing systems, has helped improve consumer volume in recent quarters and should extend past the fourth quarter,” Jay Chou, senior research analyst at IDC, said in a statement. “Chromebooks are similarly boosting the low-end commercial segment. However, the market is still recovering to near stable volumes with no significant growth in the forecast.”

At the end of the day, it’s important to remember these are just predictions. 2014 isn’t quite over, and the critical holiday quarter hasn’t yet hit its peak.